A life of fear

One of the things that strikes me about religious extremism is the fact that it always seems to be predicated on fear.  The one commonality between all of the various kinds of extremism is a perception that you're constantly at risk.  From the evil members of other religions (not to mention the non-religious, who are evil by default).  From the forces of darkness, Satan and the demons and what-have you.  And not least from god himself, who (in that worldview) is always perceived as a vicious and spiteful micromanager, needing for you to slip only once in order to have a pretext for condemning you for eternity.

When I left religion, thirty-odd years ago, the first thing I noticed (after a brief period of fretting that I'd made a huge mistake) was that I was no longer perpetually terrified of making a mistake.  And far from the perception by many religious -- that once you take the strictures of religion away, you'd become a selfish, willful, amoral jerk -- I found that I was much more aware that I was responsible myself for my own behavior.  So the loss of religion, for me, not only dispelled the irrational fear of retribution by an invisible judge, it made me more aware that we all have to take care of each other, and make this life we're living as good as possible, because we're not going to some kind of eternal reward or punishment after we die.

And the fear that permeates the fringes of religion colors everything.  In that view, there is no action that is unimportant.  Anything you do can leave you open to censure -- or worse, being influenced by the Evil One.

And as an example of this, take this warning from a blogger who calls himself "The Last Hiker" about the dangers of adult coloring books.

Why coloring books, you might ask?  Because many of them contain mandalas, which in the opinion of "The Last Hiker," provide an ingress for Satan:


A mandala is used in tantric Buddhism as an aid to meditation. They meditate on the image until they are saturated by it. They believe that you can merge with the deity by meditating on the mandala... Focusing on mandalas is a spiritual practice where you merge with “deities”–this practice opens the door to demons.

No Christian would put one in their house and sit and stare at it for an hour, chanting the sacred word!

But if the enemy can get a Christian to stare at a mandala because they are coloring it, he can have them absentmindedly focus their attention on the image and they will unknowingly open up their subconscious to this image in almost the same way.

So in his view, mandalas aren't just attractive geometric designs.  They're portals for evil.  Presumably, even if you just bought the coloring book because you thought it was pretty, it'd still work the same way.  Motivation and foreknowledge doesn't matter.  All that matters is that you're in danger. 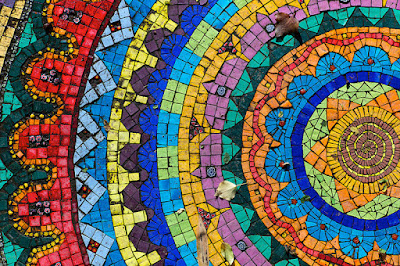 He goes on to lay out the problem clearly, and suggests a solution:

Is it really about coloring?

Or is it about spiritual hosts of wickedness sneaking mandalas into our homes and into our subconscious minds?

Is it really about recreation or is it New Age evangelism?

I can color all I want.

But if I do, I am going to get a big fat coloring book of Bible stories.

Well, for me, it would be about coloring and recreation, because I don't believe in New Age occultism any more than I believe in Christianity.   But I wouldn't expect him to see that.

Nor would I expect him to see that considering the bloodthirsty nature of a lot of bible stories, you'd need a great many scarlet crayons to color them accurately.  Personally, I like the mandalas a lot better.  They don't require you to smite unbelievers or stone people to death or believe stories about god sending bears to eat children because they'd teased a prophet about his bald head.

What impresses me most, though, is the deep-seated fear that people like "The Last Hiker" must walk around in.  There's an evil being who is waiting for any opportunity to weasel his way in and steal your soul.  Something as innocent as a coloring book could be enough.  And on the other side -- and it's doubtful whether the other side is any better -- is a deity who has a list of thousands of rules, the breaking of any one of which could doom you for eternity.

It's a wonder these people can face getting out of their beds in the morning.

I made the decision thirty years ago to take a chance on the free air of reason, and the knowledge that there's no Cosmic Good Guy who'll make things right in the end, nor a Cosmic Bad Guy for me to blame my bad behavior on.  We're all responsible, here and now, for what we do.

And I'll take that responsibility in trade for perpetual fear any day.
Posted by Gordon Bonnet at 2:06 AM