A few days ago, I lamented that the United States has far more than its fair share of complete lunatics.  This prompted a loyal reader of Skeptophilia to send me a link that indicates that Australia is also in the running.

The Land Down Under's candidate for International Wingnut of the Year is cricketer Shane Warne.  Warne is no slouch as an athlete; he's widely considered to be one of the best bowlers in the history of cricket.  However, as we've seen over and over again, being a brilliant actor or sports figure is no insurance against being a complete loon, and Warne makes this clear in an interview he did for the television show I'm a Celebrity, Get Me Out of Here, in which he tells us about his personal theory of evolution.

It's unorthodox, to say the least.

He starts out with a line that we science-types have heard all too many times before.

"If we’ve evolved from monkeys, then why haven’t those ones evolved?" he asks fellow guest Bonnie Lythgoe.

Lythgoe, taken a little aback, just said, "Yeah ..." in a dubious sort of way, instead of to ask some version of what I always do, which is "My ancestors came from France.  Why are there still French people?"

But Warne wasn't heading where anyone thought he was.  He continued, "I’m saying: Aliens.  We started from aliens." 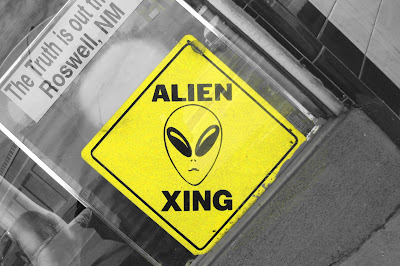 And why, Mr. Warne, do you think this?

The Egyptians.  With a shitload of slave labor.  Thanks for asking.

What is the most amusing about this is that Lythgoe, rather than saying, "Um, Shane?  You seemed a lot saner before you started talking," decided to take the low road and egg him on.  "Has to be from another world," she said.  "Has to be."

Cheered on by the fact that she wasn't guffawing directly into his face, Warne continued, "Whatever planet they’re on out there, they decided that they were gonna start some more life here on Earth and study us."

Only then did Lythgoe seem to have any reservations.  "Scientifically, we have so many similarities to monkeys," she said.  "So I don’t know ... yeah."

But Warne didn't get where he is by backing down in the face of uncertainty.  His voice full of the enthusiasm that is a characteristic of the cheerfully insane, he said, "Maybe they turned a few monkeys into humans and said 'Yeah, it works'!"

Well, I dunno.  Considering that Shane Warne is one of the outcomes, it didn't work all that well.  Maybe the aliens need to come back and do a little fine-tuning.

What always strikes me about these situations is twofold.  First, why does anyone think that being a good athlete qualifies you to weigh in on anything else?  Take, for example, Manny Pacquaio's comments about gays being "worse than animals."  He lost his Nike sponsorship for this -- entirely deserved, allow me to add.  But why are his comments even relevant beyond that?  He's a boxer, for crying out loud, not an ethicist, or even a politician.  The fact that he doesn't like gays carries as much weight as my opinions would about boxing strategy.

But second, why do we continue to listen to the ravings of people who obviously have a screw loose?  Why is this entertainment?  I have to admit to being in the minority of Americans who have absolutely no comprehension of why anyone would want to watch Duck Dynasty or Here Comes Honey Boo-Boo or Real Housewives of New Jersey.  I am not entertained by random people doing random stuff and then mugging for the camera as if they had just given an Oscar-worthy performance.

But there it is: and the reassuring thing, for me at least, is that the United States doesn't have the market cornered on wackos.  Good thing, because I needed the reassurance.  This year's presidential race is shaping into having to vote for the person who is the least insane, and it's nice to know that we're not the only ones in the world who face this problem.
Posted by Gordon Bonnet at 3:32 AM