I think one of the reasons I'm so interested in neuroscience is because there is still so much to be explored.  In my Intro Neuroscience class, I frequently have to answer questions students ask with the frustrating statement "That's unknown at this time."  Even such simple things as how memories are stored and recalled are poorly understood, although we are making significant progress in finding out how they work.

My friend and mentor Rita Calvo, Professor Emeritus of Human Genetics at Cornell University, once told me that we are currently at the point in understanding the brain that we were in understanding genetics in 1915.  We have some knowledge of what's happening, a lot of descriptive information, and little in the way of comprehension of the underlying mechanisms.  I still recall her telling me that if she were a college student in biology now, she'd go into neuroscience.

So any time there's an advance, I'm pretty keen on finding out about it.  Which is why the article my wife sent me yesterday was such an eye-opener.  Entitled "Neuroplasticity in Response to Cognitive Behavior Therapy for Social Anxiety Disorder," this study (published this week in Translational Psychiatry) has found that social anxiety might be due to a hyperactive part of the brain called the amygdala, which has been known to be involved in fear, anxiety, and the fight-or-flight response.  More interesting still, they found that cognitive behavioral therapy can literally cause this hyperactive bit to shrink.

K. N. T. Månsson of Linköping University in Sweden, who led the group that did the study, writes:


[W]e demonstrate interrelated structural plasticity and altered neural responsivity, within the amygdala, after CBT for social anxiety.  Both GM volume and neural responsivity in the bilateral amygdala diminished after effective treatment.  Left amygdala GM volume was positively associated with symptom severity before treatment, and amygdala volume decreased significantly with CBT, correlating positively with symptom improvement in both hemispheres...  [O]ur results reinforce the notion that structural neuroplasticity in the amygdala is an important target for psychosocial treatments of anxiety, as previously suggested for pharmacological treatments of post-traumatic stress disorder.

Did you get that?  Cognitive behavioral therapy -- essentially, a kind of talk therapy -- actually had an equivalent result to anti-anxiety medication, and caused the part of the brain that was hyperactive to become physically smaller.

Are you amazed as I was at this result?  Because I read this with my mouth hanging agape.  The idea that cognitive behavioral therapy actually has a measurable result in the form of an anatomical change is absolutely mind-blowing.

Pun (lame though it is) intended.

I have another reason to find this result fascinating.  I have suffered for years from serious social anxiety, starting when I was in my mid-twenties and becoming progressively worse for the following thirty years.  Those of you who read Skeptophilia but don't know me personally might have a hard time picturing someone who is as verbose as I am being a social-phobe, but you'll have to take my word for it; in most social situations, I get myself a glass of wine and then hope like hell that the hosts have a dog I can interact with.  I have gone entire evenings at friends' houses, listening politely, laughing at the right times, and not saying a word. 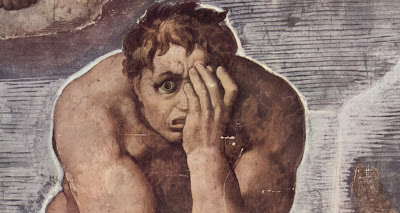 I've also been in cognitive behavioral therapy for about a year to try and deal with some of this, with guardedly positive results.  I'm not expecting such a deep-seated and pervasive problem to go away quickly; Rome, as they say, wasn't built in a day.  But the idea that by participating in CBT I am not only working toward alleviating my anxiety, but am causing long-lasting anatomical alterations in my brain -- that is amazing.

Because I have to say that living with an anxiety disorder is not particularly enjoyable.  Anything I can do to shrink that overactive left amygdala is fine by me.
Posted by Gordon Bonnet at 1:50 AM