New from the "You Really Think The World Works That Way?" department, we have the edifying story of the guy who was in a fiery car crash, in which both he and his bible survived more or less unscathed.

The unnamed driver had his Jeep sideswiped while driving down the highway in Tennessee, veered off the road, and ran into a telephone pole.  The car burst into flames.

According to witness Anita Irby:


I just saw GOD on 385.  I'm always in awh [sic] of his wonders but today just blew my mind.  This car ran off the road and hit a metal post and burst into flames not to mention the passenger was trapped inside as the car was filled with smoke the flames began to fill the inside.  THE ENTIRE EXPRESSWAY STOPPED and people ran from their cars trying to break the windows and open the doors of this mans [sic] car to free him, as they were the others went up in prayer for God to deliver this man from the paws of the devil....  Now it appeared our prayers was in vain because he couldn't move and the flames had reach the inside of the truck.  But God!!!!!! .....the flames were on the inside but the way my God is set up The Way It Look Like and what it is, None of the flames touched him and even after the car exploded once All these God blessed people ran back up ... Now the passenger even begged them to just let him die .  End of Story he's Alive and well. ......  Jesus thats my Goddd

When the scene was investigated, they found something else -- that a bible on the front seat of the car had also escaped damage.  Another witness, Eugene McNeil, said, "That is God.  If you don’t believe it, I don’t know what to say."

Here's a photograph of the car, mid-explosion: 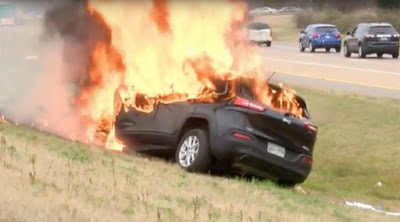 So that's pretty terrible, and I'm really glad the guy made it out alive.  What I'm going to say in addition should not be construed as minimizing the fact that there was a catastrophic accident in which no one was hurt.

And the whole bible thing... the cynic in me thinks that it was a deliberate plant by one of the witnesses or rescue crew.  I mean, bibles are made of paper, which last I checked was highly flammable.  Take a look at the photograph; the entire passenger compartment of the car was engulfed in flames.  The likelihood of a bible surviving unburned is awfully slim.

But even if it did -- you really think an all-powerful, all-compassionate deity would work that way?  If god really did want to protect the guy, how about keeping him from getting in the accident in the first place?  And the dude's car burned up.  Cars, you may have observed, are a hell of a lot more expensive to replace than bibles.

Yes, yes, I know, money's not the point, the love of money is the root of all evil, and so on.  But seriously.  People are absolutely convinced that god intervenes in football game outcomes, helps people find their lost car keys, and makes sure they find exactly the pair of shoes they were looking for in Walmart.  Don't you think that on the whole, there are more pressing things he should be attending to? 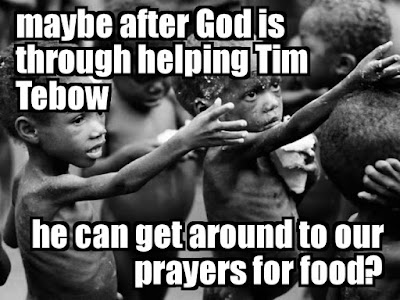 Evidently, the answer is "no."  Here are a few of the responses to the article about god making sure the bible didn't get burned:


"Behold, I see four men loose, walking in the midst of the fire, and they have no hurt, and the form of the fourth is like unto the Son of God...."   If Nebuchadnezzar could say such things, then I think we can safely assume that they have happened, and continue to happen...  Only believe.

Sometimes God make [sic] it as a lesson for the people who have a faith in him to make their faith even stronger.  And those who don't believe in God.  If you warn them or you don't do in either way they won't believe.  As they have locks on their hearts.

Adonai, the Living God.  Glory is yours Father.

God saved a man and proved that his word fireproof!

Liberals must really hate it when God does things like this.  Oh make no mistake about it God is real.  The fact that the bible wasn't touched and the man got out on time like that is proof.  There is no scientific explanation.

Well, maybe this is because of my locked heart, but even if you start from the assumption that god exists, it doesn't make sense that he'd run the universe this way.  On the one hand, he answers prayers to eliminate minor inconveniences, and allows major suffering of innocent people without doing a thing?

Oh, but "God Works In Mysterious Ways."  I suppose that explains everything.

Which is a way of thinking I simply don't get.  Probably explaining why for me, it seems far more probable that there's no deity up there in the first place.
Posted by Gordon Bonnet at 2:18 AM