Many of you have undoubtedly heard about Chipotle's announcement last April that they were switching over to using entirely GMO-free ingredients.  The whole thing had us science types rolling our eyes, because it has been shown repeatedly that GMOs aren't dangerous in general (even though there have been rare specific cases that have had untoward effects, and those have been taken off the market).  Despite the evidence, the health-food cadre applauded Chipotle's move, saying that it was reassuring that at least one restaurant chain was doing the Right Thing.

Which is about all of the good news that Chipotle had in 2015, because beginning in the summer, they have had one problem after another with food-borne illnesses.  First, there was a norovirus outbreak in Seattle in July, followed by another in Simi Valley, California in August, sickening at least 240 people in the process.  August and September saw an outbreak of salmonella in Minnesota that sickened 64.  Another 52 contracted E. coli in October from restaurants in nine different states.  Then norovirus reappeared in Boston in December, causing nausea, vomiting, and diarrhea for 136 patrons.

The whole thing prompted the chain to announce a one-day closure in February 2016 to train staff on food safety, which seems a little after-the-fact but is better than nothing.  And the whole thing would have gone down as another example of dubious handling of a crisis by a corporation, if Mike Adams hadn't gotten involved.

Yes, Mike Adams, the "Health Ranger" and owner of Natural News, who spends much of his time sounding like a raving lunatic.  This time, he says, the bad guys have been caught red-handed.  The series of illnesses contracted by patrons of Chipotle aren't just an example of bad food handling and poor cleanliness standards; no, this is a deliberate attack by "food terrorists" to discredit the restaurant because of their fearless stand on GMOs.


After observing recent events involving Chipotle and e.coli, here's my analysis of the situation: Chipotle's e.coli outbreaks are not random chance.  They are the result of the biotech industry unleashing bioterrorism attacks against the only fast food company that has publicly denounced GMOs.

How do we know?  The CDC has already admitted that some of these e.coli outbreaks involve a "rare genetic strain" of e.coli not normally seen in foods.  Furthermore, we also know the track record of the biotech industry engaging in the most criminal, dirty, sleazebag tactics imaginable against any person or company that speaks out against GMOs.

So that's it?  No evidence?  Your "analysis" is based on the E. coli strain being "rare" and that the biotech industry is made up of a bunch of bad guys?  Oh, but wait... he says this same tactic has been used against another victim:


Doctor Oz, for example, was maliciously targeted in a defamation campaign funded by the biotech industry earlier this year.  The onslaught against Oz was initiated because he publicly expressed his support for honest GMO labeling on foods.

No, the investigation (hardly a "defamation campaign") was launched because Oz was giving health advice that was demonstrably false and selling supplements that were ineffective, not because he was against GMOs.  And using Dr. Oz, who still rakes in millions, as an example of a pitiful victim of an "onslaught" leaves me trying to find a word stronger than "disingenuous" and failing completely.

Adams doesn't mince words, however.  He spells it out plainly:


There is absolutely no question that the biotech industry will resort to ANY activity necessary to destroy food companies that oppose GMOs.  And yes, this includes acts of bioterrorism against Chipotle -- something that's ridiculously easy for biotech industry operatives to carry out with simple, low-cost laboratory supplies sold online at places like Amazon.com.

To be clear, what's really happening at Chipotle is that biotech industry shills are deliberately contaminating Chipotle's food with strains of e.coli in a malicious attempt to destroy both the reputation and finances of the Chipotle food chain...  The idea that exposing the public to e.coli might be harmful to some people doesn't cause them to hesitate for even a moment.  The more people get sick or die from their Chipotle operation, the better for biotech!

What is funniest about all of this is that Chipotle is currently under investigation itself for selling food containing GMOs -- after they declared themselves GMO-free.  "We have always been clear that our soft drinks contained GMO ingredients, and that the animals from which our meat comes consume GMO feed.  But, that does not mean that our meat is GMO, any more than people would be genetically modified if they eat GMO foods," said Chris Arnold, Chipotle’s Communications Director.

So Chipotle is GMO-free in the sense of selling some food that is GMO-free and some that is not, and not being up front with its customers about which is which.  Got it.

And this is the company that the Evil Biotech Terrorists are targeting because they're too green? 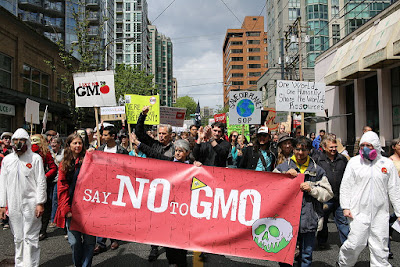 [image courtesy of photographer Rosalee Yagihara and the Wikimedia Commons]

Let me reiterate: the vast majority of GMO foods are completely safe to consume.  Certain of them -- Bt corn comes to mind -- actually decrease the quantity of pesticides used by farmers, resulting in a healthier environment.  Others, like the GM papayas that are resistant to ringspot virus, have rescued an entire industry from bankruptcy (and it's to be hoped that the Evil Biotech guys will find a similar way to save bananas from the fungus Tropical Race 4, and oranges from the bacterial disease huanglongbing -- before two of our favorite fruits are a thing of the past).

The problem is, understanding the risks and benefits of genetic modification requires that you learn some science, and for a lot of people, it's easier to listen to people like Mike Adams rant about how the biotech industry is trying to DESTROY THE HUMAN RACE MWA HA HA HA HA HA.  It's not like we haven't had ample evidence that Adams's proclamations are nonsense; but unfortunately, in the media the usual case is that the guy who screams the loudest is the one who gets believed.

For what it's worth, here's my analysis, no screaming needed: there have been hundreds of norovirus, E. coli, and salmonella outbreaks in the past, and there's no need to invent bioterrorists to account for them.  Chipotle could certainly use some improvement in their food-handling standards, however, because five outbreaks in one year is kind of a lot.  Not to mention the fact that before they announce that they're GMO-free, they should make sure they're really GMO-free, for the benefit of people who care about such things.

And last: Mike Adams really needs to shut the hell up.
Posted by Gordon Bonnet at 2:01 AM