Coming hard on the heels of yesterday's post about Ken Ham making himself look like an absolute buffoon to anyone who has decent training in science, today we have a bill in the Idaho State Senate that would allow the bible "to be used in Idaho public schools for reference purposes to further the study of literature, comparative religion, English and foreign languages, United States and world history, comparative government, law, philosophy, ethics, astronomy, biology, geology, world geography, archaeology, music, sociology, and other topics of study."

Please note that I have no particular problem with the bible being used as a reference in other sorts of classes.  It is interesting as a historical document, and certainly has a place in any class about ethics, philosophy, law history, and sociology.  Further, the bible's influence on world history is such that all student historians should have a working knowledge of its contents.  And it's also important to recognize that as part of our cultural milieu, knowing the bible simply to understand references in literature is pretty important.

But in science classes?  C'mon.  This isn't about being even-handed and open-minded; this is about turning science classes into venues for religious indoctrination.  It is not, as Idaho Republican Party Executive Director David Johnston said, to allow teachers to "have that tool in their tool box."  This is simply one more in the long, long line of bills introduced by evangelical policymakers to shoehorn young-earth creationism into public school classrooms. 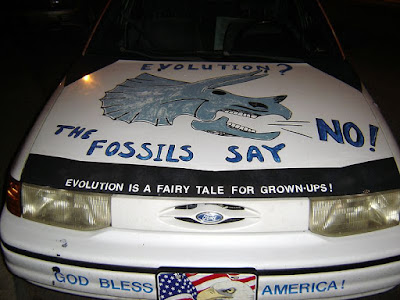 And don't be fooled by the friendly word "allow."  What this means, if the bill passes, is that the teacher would be allowed to introduce the bible into his/her class.  It doesn't mean that the students would be free to ignore it.  There's a clause at the end of the bill that says that "No student will be required to use any religious texts for reference purposes if the student or parents of the student object," but that's misleading, too.  What if the student chooses not to use the biblical material in his Earth Science class, and then on the test there's a question about how old the Earth is?  What if the biology teacher puts in questions about what day god created animals?  If it's part of the curriculum, it's hard to see how any of it's going to be optional from the students' point of view.

I'm happy to say that the National Center for Science Education is already aware of the situation, and is taking steps to make sure that the bill is defeated.  But the fact that we're still fighting this battle, for what is this?  The thousandth time?  It's a little demoralizing.

Look, if you think this is just about me being hostile, allow me to point out that I have a bible on the bookshelf in my classroom.  Any student is welcome to use it or borrow it at any time.  But what I teach is science, not folklore, mythology, or comparative religion.  If I were not to give my biology students a good grounding in the evolutionary model, I would be failing to do my job.  As biologist Theodosius Dobzhansky put it, "Nothing in biology makes sense except in the light of evolution."

And even more pertinent is another quote from Dobzhansky -- who was, by the way, a devout Russian Orthodox Christian -- and which seems a fitting way to end this post.


Does the evolutionary doctrine clash with religious faith?  It does not.  It is a blunder to mistake the Holy Scriptures for elementary textbooks of astronomy, geology, biology, and anthropology.  Only if symbols are construed to mean what they are not intended to mean can there arise imaginary, insoluble conflicts.... the blunder leads to blasphemy: the Creator is accused of systematic deceitfulness.