Because we clearly needed something to make American politics even weirder and more contentious, five days ago Antonin Scalia decided to die suddenly on the day of a Republican presidential debate. 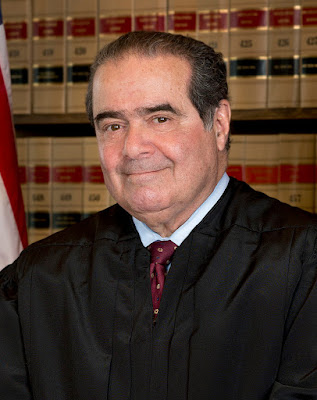 Of course, it wasn't only the candidates who responded with pithy, and at times completely inexplicable, commentary on the legacy of Justice Scalia and the future of the Supreme Court.  But Ted Cruz was certainly one of the first, wasting no time in urging his colleagues in the Senate to block any nominee President Obama brings forward to replace Scalia.  This move set off shrill commentary from both sides of the political spectrum, often from people who apparently consider themselves constitutional law scholars even though they have never read anything longer than the message inside a fortune cookie, and all of which ended up bouncing around on Facebook and Twitter for days.

Then things got crazier still.  Despite the fact that Scalia was 79, overweight, had high blood pressure and a history of heart problems, and had recently been told that he was too weak to undergo rotator cuff surgery, many people decided that there was no way a man that healthy could die suddenly of natural causes.  The conspiracy theories began to multiply like mushrooms after a rainstorm, particularly when it was announced that Scalia would not be autopsied given that his doctor was comfortable signing a death certificate citing natural causes without it.

And of course, leading the way was none other than Donald Trump, who claimed that Scalia was smothered in his sleep.

"They say they found a pillow on his face," Trump said, on Michael Savage's radio show Savage Nation, "which is a pretty unusual place to find a pillow."  Because any Black Ops hit man who was trying to murder a public official and make it look like death from natural causes would clearly be so stupid that he would leave the murder weapon sitting right on the victim's face.

John Poindexter, owner of the Cibolo Creek Ranch in Shafter, Texas, where Scalia died, tried to clarify.  "I think enough disclosures were made and what I said precisely was accurate.  He had a pillow over his head, not over his face as some have been saying.  The pillow was against the headboard and over his head when he was discovered.  He looked like someone who had had a restful night's sleep.  There was no evidence of anything else."

Of course, that only made things look more suspicious.  Alex Jones had an "emergency transmission" on his Facebook site, asking whether Scalia was murdered, but apparently not knowing enough about the situation to realize that the Justice's first name was "Antonin," not "Anthony."  Despite this, he said that Scalia wasn't going to be the last murder of a prominent conservative, and suggested that Texas Governor Greg Abbott might be next:


Scalia walked into the perfect bear trap...  Maybe they’ll find the governor with a pillow over his face, maybe that’s the new thing.  All of these conservatives that are fighting back that are real conservatives, they are all being found with pillows over their faces...  This is it.  This is the final assault.  This is the beginning of the final war.

Then, because apparently Alex Jones was lonely being the only clinically insane person commenting on the situation, we had this: 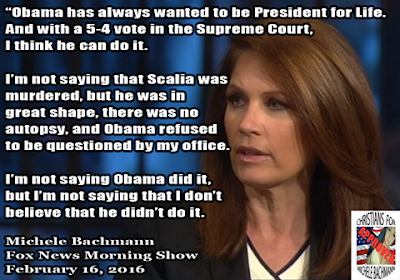 Can I get some agreement here, from both my conservative and liberal readers, that Michele Bachmann really needs to get back on her meds?

But if you think that's as weird as it gets, you really don't get how deeply crazy some Americans are.  Extremely evangelical pastor Rick Wiles decided to weigh in, and he said that Scalia was clearly murdered by President Obama, possibly with his bare hands.  How did he reach this conclusion?


The 13th was the 44th day of 2016.  Obama is the 44th president of the United States, so you have this numerology thing taking place.

The man who killed Justice Scalia deliberately left the pillow on his face as a message to everybody else: 'Don’t mess with us, we can murder a justice and get away with it...'  Officials in Washington are all terrified.  Deep down they know, the regime murdered a justice…  This is the way a dictatorial, fascist, police state regime takes control of a nation.  Barack Obama is the most lawless president we have ever had in the history of this great country, but his lawlessness is a catalyst to wake up the sleeping giant.

But no episode of Insanity On Parade would be complete without a contribution from Glenn Beck, and I'm happy to say that he doesn't disappoint.  Beck lays the death of Justice Scalia at the feet of god himself, and said that god had a purpose in offing Scalia when he did: to incite Americans to vote for Ted Cruz.

On Beck's weekly radio show, his co-host Pat Gray lamented the Justice's untimely death.  "I couldn't help but wonder, why?" Gray said.  "Why now?  Why did you have to take Antonin now?"  And Beck, as always, was ready to address the question with his usual realistic approach.


Pat, I think I have an answer for you on that.

The lord is saying, I just woke the American people up.  I took them out of the game show moment and woke enough of them up to say, 'Look how close your liberty is to being lost.'  The Constitution is hanging by a thread.  That thread has just been cut.  And the only way that we survive now is if we have a true constitutionalist as president.

Beck was immediately taken to task by Christians who questioned his view that god would knock off someone merely to make a point with the survivors, even though in the bible god does that sort of thing every other page.  But Beck shares with Donald Trump the personal motto, "Death Before Backing Down," and responded thusly:

(P)erhaps God allowed Scalia to die at this time to wake America up to how close we are to the loss of our freedom.  I happen to believe in divine providence.  Americans historically have.  Maybe you do not.  That is your choice and I do not mock you for not.  Why mock me for believing in a traditional view of God?

Fall to your knees and pray to God to reveal to you what the hour is.  This is your last call, America!  Stand with the man I believe was raised for this hour, Ted Cruz!

So anyway.  I don't think we've nearly seen the last of the wild theories surrounding Scalia's death.  After all, it's over fifty years since Kennedy was killed, and people are still arguing about that one -- and in that case, there was no doubt that it was a murder.  The whole thing makes me vaguely embarrassed to admit that I'm an American when I go overseas, you know?  Not that I'm not proud of my country or unpatriotic or any of that sort of thing, but because we do seem to have way more than our fair share of extremely loud lunatics.  I'd rather not have to spend my time convincing the people I meet while traveling that no, I don't support Donald Trump, that yes, I do think the world is more than 6,000 years old, and that no, I have no idea why the Kardashians are still in the news.  And the fact that we apparently can't accept that a 79 year old man with a weak heart couldn't die of natural causes in his sleep without some kind of evil conspiracy being involved makes me want to polish up my Norwegian so I can claim I'm only visiting the United States on a work visa.
Posted by Gordon Bonnet at 3:42 AM