Laptops of the ancients

Every once in a while, I run into a crazy claim that is so weird that it's actually kind of charming.

That was my reaction to an article sent to me by a loyal reader of Skeptophilia yesterday, about a guy who thinks that there are images from Ancient Greece that show people using laptop computers.

Those images include this marble sculpture: 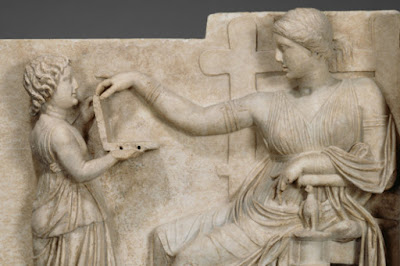 And this black-on-red ware vase: 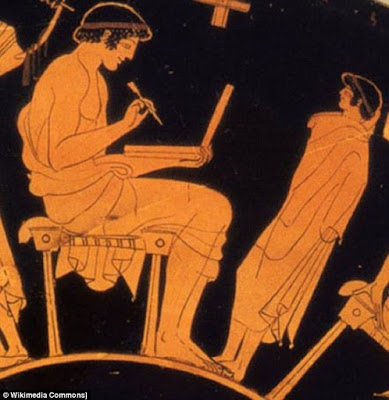 In case that isn't sufficiently convincing, we're told that the sculpture even has cable connection ports: 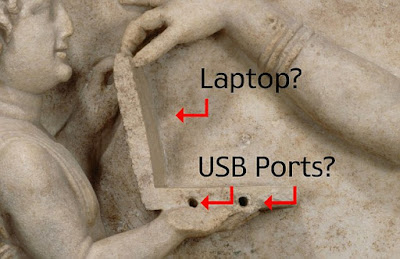 Once again illustrating that you can't misinterpret it if I tell you what it is ahead of time.

The whole thing is the brainchild (to use the term loosely) of YouTube contributor StillSpeakingOut, who seems pretty convinced. "I can’t help but think," StillSpeakingOut tells us, "that Erich von Däniken had been right all this time and that most of these myths of magical artifacts given by the gods to a very restricted group of individuals in ancient civilizations were high-tech devices similar to what we have today...  I am not saying that this is depicting an ancient laptop computer, but when I look at the sculpture I can’t help but think about the Oracle of Delphi, which was supposed to allow the priests to connect with the gods to retrieve advanced information and various aspects."

No, labeling the diagram with a red arrow and the text "Laptop?" is definitely not saying that the sculpture depicts a laptop, presumably by virtue of adding the question mark.

Of course, those silly old rationalist historians have been quick to squelch the whole idea of the Ancient Greeks inventing wifi.  The "laptop" depicted in both pieces, they say, is actually one of the following:

But I think we can all agree that when it comes to speculating over the identity of an object in a piece of ancient art, one should definitely choose the answer that requires you to believe that the ancients had a piece of technology that they didn't, in fact, have.

Because if you think the Ancient Greeks had laptops, it kind of brings up a few questions, you know?  Like why haven't we found any traces of them in archaeological dig sites?  Where are depictions of all of the other things that you'd need to make a laptop go, like modems, routers, cables, and a mechanism for producing electricity?

And most damning of all, if the Greeks had computers, why is there no mention in their literature of people spending their free time sending each other comical pictures of cats and poorly-spelled memes suggesting that people of the opposite political party are brainless, spineless, heartless, soulless, and depraved?

When you think about it, all you have in both pieces of art are objects made of two flat things hinged together, and it's not like laptops are the only possibility for that configuration.

So I'm not buying it.  And I'm especially not impressed that as support, StillSpeakingOut brought up Erich von Däniken, who kind of sucks as an expert witness, given that he thinks that Odin, Thor, Loki et al. were aliens from another planet.  Sad to say, but the prosaic answer is almost certainly right, and the folks depicted in the art work were almost certainly not checking their Biblos-prosópou, which is as close as I can get to the Ancient Greek equivalent of "Facebook."
Posted by Gordon Bonnet at 1:46 AM