There is one word that makes me see red, skepticism-wise, and that word is "clickbait."

Clickbait articles, sensationalized bullshit that has as its only point inducing gullible people to click on links and therefore generate advertising revenue, are bad enough from an ethical standpoint.  But what really torques me about this sort of thing is the fact that many of the clickers end up believing what they read, regardless of the reliability of the source.  The strategy started with such dubious sites as The Weekly World News and Above Top Secret, but has moved its way into more mainstream media (The Daily Mail has adopted this approach to the extent that most of us refer to it as The Daily Fail).  And now, it has moved all the way up to the media source on which I found a clickbait article yesterday...

The article in question, which required the collaboration of no less than three authors -- Pamela Boykoff, Alexandra Field, and Jason Kwok -- is entitled, "2016 Election: Which Candidate Will Triumph in the Year of the Monkey?"  And it is about -- yes -- using feng shui and Chinese astrology to predict who's going to win in November. 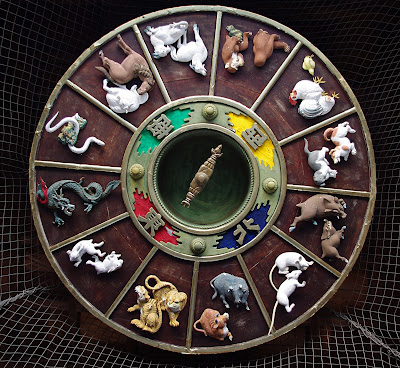 [image courtesy of photographer Jakub Hałun and the Wikimedia Commons]

The worst part about this is that it's not even in some kind of "Weird Stuff" category of CNN's webpage.  It's filed squarely under CNN Politics.  Let me be clear about this: this is not politics.  This is pseudoscientific nonsense.  Let me give you a taste of what's on it, so you don't have to click on the link and give them ad money yourself:


With the Year of the Monkey and the New Hampshire primary upon us, CNN asked Hong Kong fortune teller Priscilla Lam to divine the fates of the candidates battling it out for the U.S. presidency.

A practitioner of feng shui, the ancient Chinese system of summoning good luck, she combined the art of face reading with analysis of the candidates' birthdays and current life cycles according to the Chinese Zodiac.

She says the new lunar year will fuel good fortune for "earth dog" Donald Trump, while also lighting a fire under Hillary Clinton.

Bernie Sanders' missing metal is a problem with older voters and the fighting elements of fire, and water might just leave Marco Rubio all wet.  And don't ask about Ted Cruz's face reading.

Lam says she is "about 80%" confident in her predictions for the 2016 election. Those sound like pretty good odds.

So, yeah.  That's the level of political reporting we're seeing.  Trump's going to do well because he's an "earth dog."  Hillary Clinton's on fire.

And trust me, I don't even want to think about Ted Cruz's face, much less read it.

If we further peruse the article, we find out that Donald Trump has "a lot of sunshine in his favor."  that Hillary Clinton "has flexible lips," that Marco Rubio's "nose is okay -- it means management skill or power," and that Ted Cruz is in trouble because "in his birthday there is no wood... if you burn the wood, the fire can come up."

And the whole time I'm looking at this, I'm thinking, "how the hell is this news?"

The answer, of course, is that it isn't.  This is clickbait.  But the problem is, seeing such nonsense on a an internationally-known news media source gives it a veneer of authority, and reinforces the belief people have in such pseudoscientific claptrap.

So I'm really not able to laugh this sort of thing off.  I spend enough time, as a high school science teacher, trying to instill in students a good understanding of how the universe works, along with some skills regarding telling truth from falsehood.  Having something like this in mainstream media just makes my job that much harder, something I very much don't need.  Fighting the creationists and the climate-change deniers is bad enough; I really don't want to have to do battle with the Chinese astrologers as well.
Posted by Gordon Bonnet at 2:04 AM