The reason for my recent absence from Skeptophilia is that my lovely wife surprised me on Valentine's Day with plane tickets and a hotel reservation for a quick trip to San Juan, Puerto Rico.  This would be a wonderful gift at any time, but was especially magnificent considering the time of year.  Being a southerner, the winters in upstate New York make me want to crawl under my down comforter in November and stay there until May.  And her timing was impeccable; we've had a mild winter, but were gone for one of the nastiest spells of weather we've had thus far.  (In fact, the trip almost didn't happen when the jet engine wouldn't start in Rochester the day we left, because at seven below zero Fahrenheit it was simply too cold.)

But the engines finally started, and we were up in the air and winging our way toward Puerto Rico.  On the way there, Carol asked me what I wanted to do while we were in San Juan.  I thought about all the possibilities -- lounging on the beach, swimming, snorkeling, hiking, seeing the sights -- so of course what I said was, "I want to see the Haunted Sentry Box."

I first ran into the tale of the Haunted Sentry Box of Old San Juan when I was perhaps twelve years old, and happened upon a copy of C. B. Colby's book Strangely Enough.  This book is a whimsical, often scary, sometimes hilarious account of "true tales of the supernatural," each only a page or two long.  It was one of my first encounters with someone who claimed that ghosts, UFOs, and monsters could be real, and is one of the things that started me down the long and twisty road that led to Skeptophilia.

The Tale of the Haunted Sentry Box is chilling in its simplicity.  In it, we hear about a sentry "many years ago" in the fortress of San Cristobal in the oldest part of San Juan, who was assigned duty in one of the stone sentry boxes that jut out from the main wall.  He was reluctant, we're told, because it was a lonely post, and he had a "feeling of foreboding."  And sure enough, when another soldier went to relieve him some hours later, the sentry box was empty.  His superiors were certain the man had deserted. 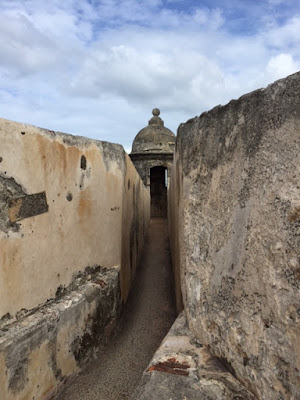 One of the sentry boxes on the wall of San Cristobal.  I have to admit, it wouldn't be a job for the claustrophobic.

So the second soldier was assigned to take the missing man's place, and a watch was set on the wall overlooking the sentry box.  Only shortly afterwards, a searing light blazed from inside the sentry box, shining out through the slit-like windows, and a "piercing scream" split the night.  The watchman roused his superiors from sleep, and they ran to investigate.  The second soldier was now missing as well -- and the inside walls were "black with soot" and there was a strong smell of sulfur.

See why I wanted to go there?  So we hiked on over to San Cristobal, paid our five bucks' admission fee, and explored the ancient walls and rooms of the fortress.  But although "La Garita del Diablo" was marked on maps -- proving that Colby hadn't, at least, made the story up himself -- we couldn't find the actual item. 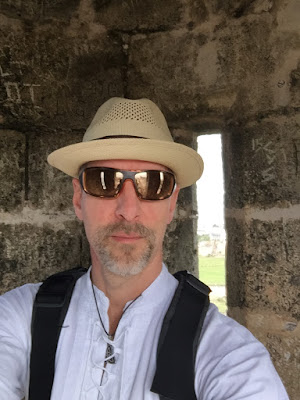 Me, exploring one of the non-haunted sentry boxes of San Cristobal.  I detected no soot, sulfur, or traces of missing soldiers.

Finally, after perhaps an hour of wandering around, I decided to ask in the souvenir shop (of course there's a souvenir shop) about the Haunted Sentry Box.  Could I have directions for how to get there?

The young woman behind the counter looked alarmed.  "Oh, no, no," she said, her eyes wide.  "We do not allow anyone to go there, sir."

"It is not allowed," she said firmly.  From her expression, she looked torn between crossing herself and forking the sign of the evil eye in my direction.

She added reluctantly that there was, however, a point on the exterior wall where one can peer down toward La Garita del Diablo, if I was so determined to blight the memory of my visit with such a place.  Eager to so blight myself, I followed her directions to the wall's edge, and leaned over.  And here it is: 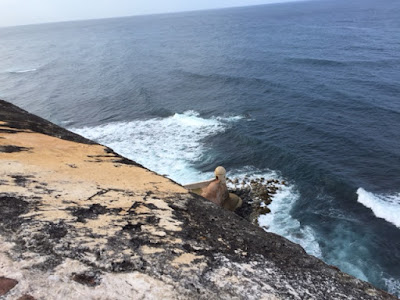 Not impressive at this distance, perhaps.  And I wasn't able to pick up any presentiments of evil through my binoculars when I scanned the place.  No black smoke curling up from the windows, no leering face in the shadows of the door.  It looked just like all of the other sentry boxes we saw, both in San Cristobal and in the big fortress of El Morro only a mile westward along the coast of San Juan Harbor.

So the whole thing was a little anticlimactic.  Here I hoped to give Satan a good shot at me, and I was prevented from doing so by some silly regulation about protecting the tourists from being vaporized.

I'm happy to say that the remainder of the trip was wonderful, and I did get to spend a lot of time lounging on the beach in swim trunks, drinking coconut rum, and trying unsuccessfully to get rid of all the sand stuck to my legs.  We also spent a happy half-day hiking in the El Yunque Rain Forest, only an hour's drive to San Juan, which is a must-see for birders and other nature lovers.

But I have to confess to some disappointment about the Haunted Sentry Box.  So near, and yet so far. Not only did I not have my soul stolen, our airplane crossed the Bermuda Triangle (twice) and we didn't disappear.  You know, if the world of the paranormal is so eager to interact with us living humans, they really aren't taking these opportunities very seriously.
Posted by Gordon Bonnet at 5:20 AM