One of the problems with biblical literalism is that the bible has some pretty awful and bloodthirsty bits.  It's been observed more than once that if anyone ever did try to live biblically, in the sense of following all of the biblical commands to the letter, he'd end up in jail.

The result, of course, is that people cherry-pick.  If you're up front about this -- if you admit that a lot of the biblical precepts were commands for another time and culture, and are irrelevant today -- I've got no quarrel with you whatsoever.  (Some people even go so far as to say that some of the rules in the early books of the bible, such as the penalty of death by stoning for collecting firewood on the Sabbath, were wrong even back then.) 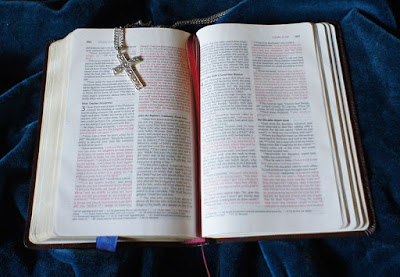 Most alleged literalists, however, solve the problem by obeying to the letter the rules they like (such as the prohibitions against premarital sex and gay marriage), believing word-for-word the stories they like (such as the six-day creation of the universe and the story of the flood and Noah's ark), and pretty much ignoring everything else.  But every once in a while you run into someone who has decided that being a biblical literalist means that you really have to buy the whole thing, in toto, and that when the bible conflicts with one of the rules of civilized society, society is wrong.

Which brings me to Reverend Steven Anderson.

Anderson is the pastor of the Faithful Word Baptist Church, and has been in the news before for his vitriolic anti-gay message.  (He's the guy who said if his brother was gay, he'd support his execution.)  But now, he's been called upon to defend one of the most horrific practices condoned in the bible -- slavery.

This is one that makes even the anti-gay cohort squirm a little.  Not Anderson, though.  This is a direct quote from his sermon -- which, if you don't believe me, you can listen to here, if you can stomach it:


People will try to come at us — usually atheists or people like that — they’ll come at us and say, “Well, the Bible is wrong because the Bible condones of slavery.”  We’ve all heard that before, right?

But here’s the thing about that, is that if the Bible condones slavery, then I condone slavery.  Because the Bible’s always right about every subject… and keep in mind that locking someone in prison is more inhumane than slavery.  Prison destroys people’s lives.

And, in Anderson's fantasy world, slavery apparently didn't.  The families torn apart when slaves were kidnapped from their homes, the brutal beatings and horrific living conditions, the attitude by the slave-owners that their slaves were worthy of no better because they weren't quite human -- all of that is evidently just fine in god's eyes, and therefore in Anderson's.


Is the Bible just pro-slavery?  No.  But are there certain situations where God did indicate slavery or for people to beat their servants?  Absolutely.  Absolutely.  Of course!  But you know what?  It’s all right.  And I agree with all of it.  Why?  Because the Bible is God’s Word.  That’s why.

So that settles that, at least for Anderson.

Another awkward point for many Christians is the bible's recommendations for the treatment of women.  Dozens of bible verses mandate that women be treated like objects to be given away or sold, and once married, subjugated to their husbands.  In 1 Corinthians 14, we read the following:


The women are to keep silent in the churches; for they are not permitted to speak, but are to subject themselves, just as the Law also says.  If they desire to learn anything, let them ask their own husbands at home; for it is improper for a woman to speak in church.

Which makes you wonder how outspoken evangelical women justify being in leadership roles.

Here too, most Christians just breeze past the dodgy bits.  But not all.  Over at the site Biblical Gender Roles, we find out in an article with the lovely title "How To Help Women Learn Their Place" that there are people who are determined to have this followed to the letter, too:


We have women saying things in the wrong place or in the wrong way.  Women showing no deference or respect toward men.  Daughters showing little to no respect for their fathers and wives showing little to no respect for their husbands.  Wives routinely shame their husbands in public not to mention in private.  Daughters disobey their fathers and wives routinely disobey their husbands with impunity.  Many women pursue selfish career ambitions instead of being ambitious for marriage, child bearing and homemaking.

If you can imagine.

Further along in the article -- once again, if you can stand to read it -- we find out that women should be cooks and house-cleaners and child-bearers, defer to their husbands in all matters, be ready for sex whenever the man wants it, be submissive, and dress modestly.  We then hear all about how the writer is training his own daughter in these ways, to be the "wife and mother that God wants her to be."

Is it just me, or is this close to emotional and psychological abuse?

You know, you have to admire these people for one thing; they aren't hypocrites.  They have decided on their precepts, and live them down to the last syllable.  The horrific part is that their precepts are entirely repugnant, and are based on the savage customs of Bronze-Age sheepherders that for some reason they still think are relevant and humane.

So however annoying the cherry-pickers are, at least they're not really trying to follow the bible to the letter, however much they claim that they are.  Which, after hearing about Reverend Anderson and the owner of Biblical Gender Roles, most of us will probably consider a fortunate thing.
Posted by Gordon Bonnet at 2:02 AM