So you know about the ongoing nonsense regarding whether Barack Obama was born on American soil?  The "Birther Truther" foolishness still plagues us here in the United States, even though Obama only has a little less than a year left of his presidency, and amazingly enough hasn't turned the White House into a mosque or ceded the country to Kenya or any of the hundreds of other silly things these people claimed.

And of course, being a fact-free conspiracy, when the Show Us The Birth Certificate cadre were actually shown the birth certificate, they responded by claiming that it was a forgery.  Other "evidence" began to be trotted out, such as an alleged 1981 Columbia University identification card under the name "Barry Soetoro" with Obama's photograph, which says, in large unfriendly letters, "FOREIGN STUDENT." 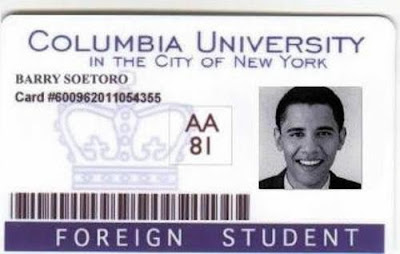 This claim has been roundly debunked, of course.  The bar-coded ID card format wasn't even adopted by Columbia until 1996.  The individual who was issued the ID number shown turns out to be one Thomas Lugert, a Columbia student in 1998 who is white and looks nothing like President Obama.  But as I've said before: facts don't matter to these people.  If they have a claim they can shriek about, they'll shriek even louder if you show them why it can't possibly be true.

And you may recall that one of the leaders of the Barack-Born-In-Kenya model of reality was none other than Donald Trump.  As recently as July of last year, Trump was asked for his opinion on whether Obama was born in the United States, and he replied, "I don’t know.  I really don’t know.  I don’t know why he wouldn’t release his records."  Except, of course, for the fact that Obama did release his records.  It's just that conspiracy wackos don't become conspiracy wackos by falling for little tricks like hard evidence, and also that being Donald Trump means never having to admit you were wrong about anything.

The reason this all comes up, and what makes it kind of hilarious in a twisted way, is that there is a guy who is mounting a one-person campaign...

... to prove that Trump himself was born in Finland.

According to this guy, Donald Trump was born "Rögnvaldr Trømp," a name that immediately reminded me of the bit in the opening credits of Monty Python and the Search for the Holy Grail that had lines like, "Mööse chöreögraphed by Hörst Pröt III."  And being something of a language geek, I was also struck by the fact that "Rögnvaldr Trømp" doesn't look like a Finnish name at all, but more like a bizarre hybrid of Norwegian and Icelandic.

But the lunacy doesn't end there.  According to the blogger in question -- whose name I wasn't able to find anywhere on the site, presumably because he's afraid that if he is ever identified, black-clad Finnish operatives are going to take him out for blowing the whistle -- the whole thing came from "sources close to the Clintons."  These "sources," he says, are certain that if Trump gets elected, he's going to sell us out to the "Euroleftists."  But best of all was a paragraph a little further down that I have to quote in toto, because just describing it would not give you the full impact of how truly wonderful it is:


According to Eurotech magnate Linus Torvalds, on whose Lapland estate Tromp and Princess Ivana are reported to own a summer home, the Congressman takes "an active hand" in the governance of his native Finland. Torvalds, head of pro-piracy tech firm Lindex, says that he "sees [Tromp] as a brother--no, a hellittelysana (Here he used a Finnish term of endearment which translates roughtly [sic] to 'solstice-father-brother') who has done more for Finlandia than any other man could dream."

Okay.  So it's "Linux," not "Lindex."  "Lindex" sounds like a spray cleaner you'd use for getting the dust off of computer monitor screens.  And hellittelysana isn't a Finnish term of endearment, it's the word that means "term of endearment."  So it'd be a little odd if someone called Trump that.  It'd be as if I said to Ted Cruz, "You are a complete and total epithet!"

So the whole thing is kind of ridiculous, although I have to admit that it's wonderful for the humorous irony value.  I doubt anyone will take it as seriously as the Obama birther thing was -- showing, perhaps, that Trump's opponents have a lot better critical thinking skills than his followers do.  But even if it never gains traction, I thought it merited a shout-out as being one of the most purely weird conspiracy theories I've ever run across.

And given how many conspiracy theories I've run through here in Skeptophilia, that by itself is worthy of note.
Posted by Gordon Bonnet at 2:09 AM