Can we once, just once, face a problem in the world and find a solution based in logic?  And, fer cryin' in the sink, not ascribe it to a conspiracy?

I am referring, of course, to the Zika virus, which is currently exploding in the tropics, and is suspected of being connected to microcephaly and low brain development in infants born to infected women, and also cases of the neurological disease Guillain-Barré syndrome.  (Nota bene: these connections are still tentative, and are being studied.  The evidence thus far indicates possible links, but establishing causation and finding an underlying mechanism in either case have yet to be accomplished.)

Of course, a viral disease carried by mosquitoes, with uncertain and possibly devastating consequences for the victims through an unknown mechanism, opens the door for wild speculation.  And the conspiracy-minded amongst us have certainly been quick to rise to the occasion.

First, we have the claim that Zika was caused by the release of genetically-modified mosquitoes by Oxitec Inc., a biotechnology firm -- in some versions of the story, caused deliberately for the purposes of population control.  And since no conspiracy is complete without a powerful rich guy controlling the whole thing, the originator of this evil master plan is...

... none other than Bill Gates.

My question is: why would Bill Gates do this, given that if the population of the Earth crashes, there will be far fewer people around to purchase updates to Windows every six weeks?  He doesn't really seem to have a lot to gain by spawning a pandemic.  And as for the conspiracy theorists, they're not really clear about this.  The upshot is, "Mwa ha ha ha ha ha ha ha, that's why." 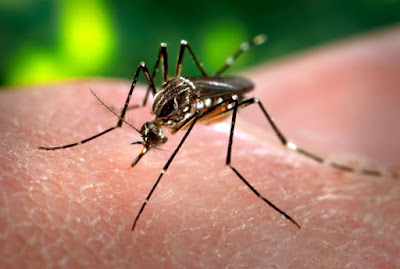 The problem, of course, is that the whole claim is based in a bunch of falsehoods.  As Christie Wilcox points out in her wonderful blog Science Sushi, Zika is nothing new; it was first isolated and described in 1947 from mosquitoes collected in the Zika Forest of Uganda.  Thus the name.  It spread across Africa by 1968, made a jump to Micronesia in 2007, to Polynesia in 2013, and was first spotted in the Americas -- in Chile, not Brazil -- in 2014.  The genetically modified mosquitoes were developed to combat mosquito outbreaks, not foster them; the GM mosquitoes contain a "kill switch," a set of genes that allows them to mate but results in non-viable offspring.  And because the species of mosquito that carries Zika -- Aedes aegypti -- also carries dengue fever, chikungunya, yellow fever, and malaria, it's hard to imagine how this could be a bad thing, especially considering that the other option is the use of highly toxic pesticides.

But the conspiracy silliness doesn't end there.  Jon Rappoport, whose dubiously sane pronouncements have been featured in Skeptophilia before, has come up with something even goofier.  In his blog post "Zika Hoax: Five Things That Will Happen Next," we hear that there is no connection between Zika and microcephaly (which, of course, could turn out to be true; as I mentioned earlier, scientists are still investigating the point).  Then, however, he runs right off the cliff, predicting that researchers will develop a vaccine for Zika, but that the vaccine and the virus will turn out to be "weaponized biowar [agents]."

Of course, the major problem with all of this foolishness is that the basis of the conspiracy is that the release of the GM mosquitoes coincides, both in time and place, with the outbreak.  And this turns out to be false.  As Wilcox writes:


The epicenter of the outbreak and the release clearly don’t line up—the epicenter is on the coast rather than inland where the map points. Furthermore, the first confirmed cases weren’t reported in that area, but in the town of Camaçari, Bahia, which is—unsurprisingly—on the coast and several hundred kilometers from the release site indicated.

But perhaps more importantly, the location on the map isn’t where the mosquitoes were released. That map points to Juazeiro de Norte, Ceará, which is a solid 300 km away from Juazeiro, Bahia—the actual site of the mosquito trial. That location is even more on the edge of the Zika-affected area.

On the other hand, think about it; it makes sense that they'd release the GM mosquitoes near where the outbreaks occurred.  Since the whole idea is to control Zika in Brazil, it wouldn't make much sense to release the mosquitoes in, say, Greenland.

But that sort of logic never seems to appeal as much as fact-free and panic-stricken shouting, for some reason.

In any case, bottom line: Zika isn't genetically engineered, isn't new, and isn't being spread by GM super-mosquitoes because of some obscure plot by Bill Gates.  I'd be much obliged if people would stop spreading this nonsense around, because it's got to be annoying to the scientists who are working on the real problem that Zika represents.  Thank you.
Posted by Gordon Bonnet at 1:55 AM