I have a particular aversion to seeing people humiliate themselves.  I remember as a kid watching sitcoms on television, and when I knew a character -- even one who richly deserved it -- was going to be put in an embarrassing situation, I often couldn't bear to watch it.

Still, there are certain exceptions.  I have to admit to experiencing an emotion that can only be described as "glee" when I heard that Sarah Palin was going to debate Bill Nye on the topic of climate change.

What, it wasn't bad enough that Ken Ham had his ass handed to him in a debate with Nye?  Ham at least is somewhat articulate, even if he doesn't seem to understand the concept of "evidence."  Palin, on the other hand, often seems to be speaking in some weird dialect that involves replacing every third word with a randomly chosen noun or verb.

Either that, or she does her speeches while drunk. 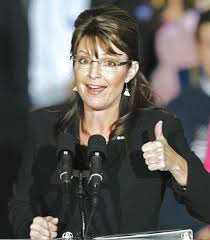 So a Nye vs. Palin debate would basically be Godzilla vs. Daffy Duck.  It would be worth watching purely for the comedic value.

However, I did wonder what Nye thought he stood to gain by debating her.  When your opponent has a fourth grade vocabulary and thinks that saying "You betcha" followed by a finger-gun constitutes a valid talking point, there's nothing much you can do that will have any effect.  Especially given that the topic is science.

So it was with combined disappointment and relief -- along with saying, "Aha.  That makes better sense" -- that I found out that Nye isn't actually debating Palin.

Palin is debating clips from speeches on climate change Nye has made.

So in effect, she'll have a cardboard cutout of Bill Nye standing there, play some carefully chosen sound bites, state her rebuttals, and declare victory.

The whole spectacle is set to coincide with the release of the petroleum-industry-sponsored propaganda piece Climate Hustle, which will be about as scientifically valid as Andrew Wakefield's anti-vaxx film Vaxxed that caused such a kerfuffle when it was pulled from showing at the Tribeca Film Festival.  The difference is that the anti-science climate change deniers and Tea Party right wingers like Sarah Palin are being funded by people like the Koch brothers, who have considerably deeper pockets than the anti-vaxxers do, and therefore far more influence.

Despite my reluctance to watch a long exercise in self-humiliation, I might watch the Sarah Palin climate change "debate."  If for no other reason, to pick up a few more lines like the following, part of a speech in 2011 in which she was trying to talk about the bravery of Paul Revere:

So I wonder what she'll have to say about anthropogenic climate change.  And whether she can pronounce "anthropogenic."  My advice: tune in on May 2.  When else will you have the opportunity to watch the spectacle of a person being defeated in a debate by someone who isn't, technically, there?
Posted by Gordon Bonnet at 2:01 AM