Even people over here across the Atlantic have been watching the whole Brexit controversy closely, and wondering whether the powers-that-be in Great Britain will elect to remain part of the European Union, or leave it and steer their own course.  I'm not nearly well-informed enough in global politics and economics to comment either way, but of course I did have to take a look at an article over at Politics that said that there have been conspiracy theories popping up all over the place that have to do with the issue.

Now, I may not be very savvy politically, but I do know my conspiracy theories.  (What that says about  my priorities I would prefer not to consider.)  So naturally I had to check out the article.  The author, Adam Bienkov, says that there are five conspiracy theories that have arisen regarding the Brexit controversy, to wit:
So I read all of this, and I'm thinking, "That's it?  That's the best you can do?  Sleeper agents, website crashes, and biased academics and news broadcasters?"

What, no chemtrails?  No government-run execution camps with guillotines for dissenters?  No HAARP-style weather modification stations to unleash chaos?  No claims that every damn thing that happens is a "false flag?"  No shape-shifting Reptilian alien overlords from another planet?  (Not even Nigel Farage?  I'd think that'd be a gimme.  The first time I saw him, he immediately struck me as looking like someone whose facial muscles were being operated remotely by a species that had only recently learned the rule "When expressing interest, raise the eyebrows and open the eyes wide.") 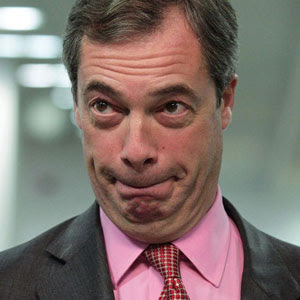 And not even a single claim that whatever side of the issue you're arguing against is being controlled by an evil cadre of Jews?

C'mon, British people.  You can do better than this.  I'm not normally someone who waves the Stars & Stripes and runs around shrieking "'Murica!  Fuck yeah!", but in this case, I'd say we're kicking your asses.  Okay, you got us with regards to beer quality, humor level in comedy shows, cleanliness of public transport, attractive accent quotient, and overall level of civilization, but when it comes to conspiracy theories, you don't even have a shot at a bronze medal.

I know it's probably galling to have to look to your American cousins for inspiration, but admit it; we got this down cold.  When it comes to dreaming up cockamamie explanations for perfectly ordinary events, the Yanks are the tops.  (Although I must say that the Russians are contenders.  Just in the last couple of years, we've had Russians claiming that a funny-looking rock was a spaceship, that Vladimir Putin attacked the Crimea to get control of a Jurassic-age super-powerful alien pyramid, and that every historical account that occurred before the early Middle Ages is a fabrication by an evil consortium of historians.  Not to mention various reports of Bigfoot, a topic they seem to take awfully seriously.)

So I'm not suggesting that we Americans get complacent, mind you.  It's times like this that I'm glad we have people like Alex Jones and Jeff Rense on our side.  But the recent British attempt to break into the world of batshit lunacy was really kind of embarrassing, and I would encourage any British readers of Skeptophilia to pay close attention to how we do things over here, and follow our model.

I'm confident that you can rise to the occasion.  Any country that produced both Monty Python and Eddie Izzard is definitely not lacking in the quality control department.  So I'm counting on you.  I'll be watching the news over the next few weeks, waiting for words like "Illuminati" and "truther" and "Nibiru" and "police state" to show up in British media sources.  Let's see what you got.
Posted by Gordon Bonnet at 4:38 AM