I know, it doesn't take a Ph.D. to figure that out.  (Fortunately for me, since I don't have one.)  But I was thinking about this today with regards to Omar Seddique Mateen, the perpetrator of Sunday's slaughter of 49 men and women in an Orlando nightclub.  Mateen himself was killed in the incident, leading to speculation about his motives for committing such a horrific act. 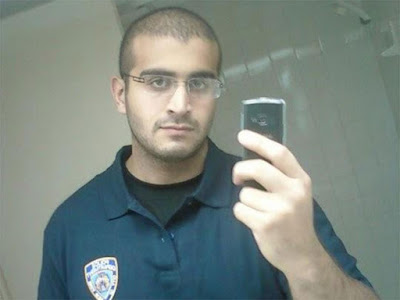 Immediately after he was identified, his obviously Middle Eastern name fueled talk that he was acting on anti-LGBT beliefs that came from Islam.  This idea was bolstered by the revelation that in a 911 call he made in which he pledged himself and his actions to ISIS.

Then his father came forward, and said that his son had committed the crime because he was "angered over seeing two men kissing."  So for a time, it seemed like the origin of his violent acts was clear enough.

But the father added a comment that made a lot of us frown in puzzlement: he said that his son's actions "had nothing to do with religion."  Really?  If so, why would he be angry over two guys kissing?  It's not like rational secularism would give you the impetus to be so furious over gay guys showing affection that you'd shoot up a nightclub.

Shortly after that, Mateen's ex-wife, Sitora Yusufiy, came forward and said that Mateen had been physically and verbally abusive to her.  In her statement, Mateen comes across as not just angry, but mentally unstable.  "He was two totally different people," Yusufiy said.  "He would turn and abuse me, out of nowhere, when I was sleeping...  He was not a stable person.  He beat me.  He would come home and start beating me because the laundry wasn't finished, or something like that."  As far as his religious ideology, she said he was religious, but had never expressed sympathy with ISIS, terrorist organizations, or extremists.  "He wasn't very devout," Yusufiy said.  "He liked working out at the gym more."

Then things got even murkier when it was revealed that Mateen himself was a "regular" at Pulse himself, and "used gay dating apps."  This put yet another spin on things -- that Mateen was gay and leading a double life, pretending to be straight to keep the peace with his conservative father.  The image developed of Mateen as a tortured young man, steeped in self-loathing, who used the attack as a way of atoning for his own "sinfulness" through jihad against homosexuals.

Here's the problem, though.  It's always a losing proposition trying to parse the thoughts and motives of someone who died without leaving any hard evidence about what he was thinking at the time.  And even if he had -- left a note, called a friend, whatever -- there's still the problem that we'd only have his own words from which to draw a conclusion.

It's frustrating to say, "We don't know, and almost certainly will never know."  After a tragedy, we want to know the reason, to understand how such appalling things could happen.  Somehow, if we could just pin the cause on one thing -- Islam, availability of guns, mental instability, his anguish over being a closeted gay man, growing up in a narrow, judgmental household -- we could attain closure.

But in this case, it doesn't seem to be possible.  His motives could be any or all of the above, or something else we haven't even considered.  People seldom do anything based on one straightforward, clear reason, much as it'd make life simpler if that were so.  At this point, it's probably pointless to engage in further speculation; we need to be putting our thoughts and efforts into helping the survivors and the families of the victims, and -- most importantly -- taking steps to build a society in which such horrific acts never happen again.
Posted by Gordon Bonnet at 1:55 AM