My younger son came for a visit this weekend, and predictably, our lunchtime conversation ventured out into the ether.

We were talking about various kinds of woo-woo stuff, and Nathan said, "You know, I think the one that bothers me the most is the whole Flat-Earth thing.  All woo-woo ideas require you to ignore evidence, but that one raises ignoring evidence to an art form."

I asked him what he was thinking about, and he said, "Have you ever heard of 'zetetic astronomy?'"  I hadn't.  Nathan told me that it was the brainchild of one Samuel Rowbotham, a 19th century British crank to whom we largely owe the fact that the flat Earth model is still around.  Rowbotham did the lecture circuit in the mid-to-late 1800s, talking about his idea that the Earth was a flat disk centered at the North Pole, with a ring of icy mountains (which we spherical-Earth sheeple call "Antarctica") around the edge.  All of the astronomical objects we see, up to and including the Sun and the Moon, are actually hovering a few hundred miles off the ground, doing peculiar little loops for reasons that physics is unable to explain.

Rowbotham was a master of the Gish Gallop -- a debating technique (named after young-Earth creationist Duane Gish) that involves drowning your opponents with a machine-gun delivery of trivial questions and straw men so quickly that they can't possibly address them all, meaning they come off looking like they've lost the argument.  A reporter for the Leeds Times said about Rowbotham in 1864, "One thing he did demonstrate was that scientific dabblers unused to platform advocacy are unable to cope with a man, a charlatan if you will (but clever and thoroughly up in his theory), thoroughly alive to the weakness of his opponents."

One of Rowbotham's acolytes, Lady Elizabeth Blount, founded the "Universal Zetetic Society" to spread his ideas, and the whole thing was given momentum when the Christian Catholic Apostolic Church of Zion, Illinois threw their support behind Rowbotham's ideas and began to use their radio show to broadcast information about it.  In 1956, The Universal Zetetic Society renamed themselves the "Flat Earth Society" -- prompted, apparently, by the fact that no one could actually pin down what the hell "zetetic" means -- and they continue to plague us, lo unto this very day.

Of course, back in Rowbotham's day, there wasn't as much hard evidence to go on, so I have at least a little more sympathy for the 19th century's Flat Earthers.  Today, though -- the amount of twisted rationalization you have to go through to buy any of it is breathtaking.  Take, for example, this gem, that appeared yesterday over at the r/conspiratard subreddit: 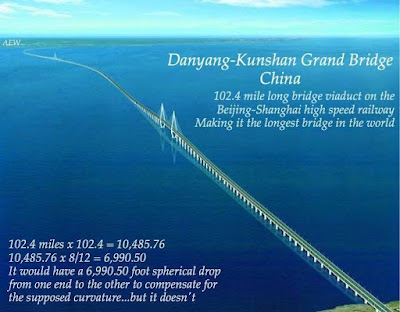 Remarkably, their math is pretty close to spot-on -- the distance between a sphere the size of the Earth and a tangent line, over a distance of 102.4 miles, is just shy of 7,000 feet.  But how do we know that the bridge doesn't curve that much?

Two ways, apparently:  (1) we have a photograph of a four or five mile long stretch of the bridge, and it sure looks straight to us; and (2) it just doesn't.  Stop asking questions.

All of their arguments boil down to this sort of thing.  How do Flat Earthers explain the Coriolis effect, the fictitious "force" that comes from our reference frame being fixed to a spinning sphere, and which causes cyclones to turn counterclockwise in the Northern Hemisphere and clockwise in the Southern?

They don't.  A direct quote:  "The Coriolis effect has nothing to do with the shape of the Earth."  End of discussion.  Seasons?  Caused by a shift in the movement of the Sun across the disk, not by the axial tilt of the Earth.  Photographs of a spherical Earth taken from space?  Optical illusions and/or deliberate misinformation from NASA.

Despite there being anti-science viewpoints that have a much bigger impact on human health, safety, and progress than the Flat Earthers -- the anti-vaxxers, anti-GMOers, and the radical fringe of most religions come to mind -- the Flat Earthers seem to be uniquely resistant even to acknowledging the issues.  They simply ignore them into nonexistence.

So I understand where Nathan was coming from when he said, "I'd rather debate a young-Earth creationist than a Flat Earther."  Me, though -- I'd rather not debate either one.  There comes a point where the only reason you keep hitting your head against the wall is that it feels so good when you stop.
Posted by Gordon Bonnet at 1:58 AM