Once again, the United States has been hit by a mass murder.  Fifty confirmed dead, more than that injured.  My heart is torn in half thinking about over a hundred people who had only intended to spend a fun night dancing, drinking, and socializing, and found themselves the targets of a terrorist.

But you know what galls me more?  Before the bodies cooled, before family and friends had been notified, before all of the victims had even been identified, there was an explosion of rhetoric designed for one purpose and one purpose only; to use the tragedy to score political points.  These ghouls couldn't even wait a few days before twisting the deaths of fifty people to serve their own ideologies.

Let's start with Texas Lieutenant Governor Dan Patrick, who shortly after the massacre tweeted a verse from the bible -- Galatians 6:7.  "Do not be deceived.  God cannot be mocked.  A man reaps what he sows."  Patrick was immediately excoriated for his callous response, and as a result deleted the tweet, following it up with a statement about how "stunned and saddened" he is over the event.  Some have generously speculated that Patrick's post had nothing to do with the Orlando killings -- he does post bible verses on a daily basis -- but given his anti-LGBT vitriol in the past, I'm to be forgiven for being somewhat doubtful of that.

Others were less equivocal about it.  Firebrand evangelical preacher Steven Anderson stated that he was happy the massacre occurred, because after all, the victims were "just disgusting homosexuals at a gay bar."  Anderson went on to point fingers at others he said were going to use the tragedy to gain political ground, in a statement that should be an odds-on contender for the 2016 gold medal in Unintentional Irony:


But the bad news is that this is now gonna be used, I’m sure, to push for gun control, where, you know, law-abiding normal Americans are not gonna be allowed to have guns for self-defense.  And then I’m sure it’s also gonna be used to push an agenda against so-called “hate speech.”  So Bible-believing Christian preachers who preach what the Bible actually says about homosexuality — that it’s vile, that it’s disgusting, that they’re reprobates — you know, we’re gonna be blamed.  Like, “It’s all extremism! It’s not just the Muslims, it’s the Christians!”

Because saying that homosexuals deserve to be gunned down because of their sexual orientation is, apparently, "not hate speech."

But Anderson's statement brings us to the whole conflict over gun ownership.  Because it wasn't even an hour after the murders hit the news that I saw this: 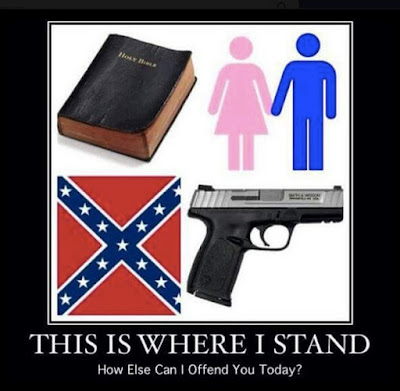 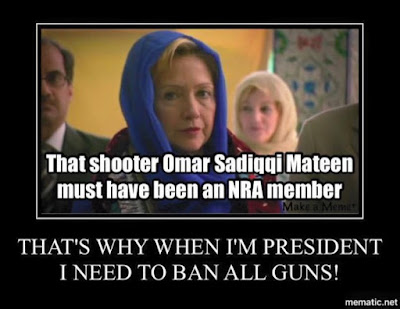 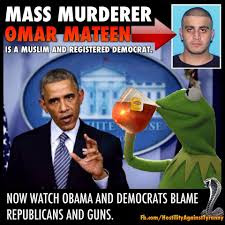 Then, there's this post implying that it's Obama's policies that are at fault here: 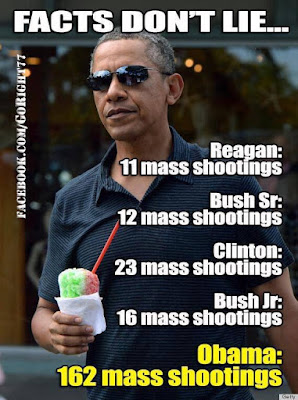 Because obviously, there can't be any reason for those statistics other than, you know, Obama.

Not to be outdone, Donald Trump commented on the killings, but as befits a sociopathic narcissist, made it all about him.  "Appreciate the congrats for being right about radical Islamic terrorism," he tweeted.  "I don't want congrats, I want toughness & vigilance.  We must be smart!"

How about some mention of the victims, here?  No, of course not.  That would distract from his incessant focus on himself.  And because that wasn't enough, he followed it up by a sly implication that Obama was not only complicit, but in agreement with the shooter.  He "gets [the motives of the killer] better than anyone understands," Trump said in an interview yesterday.

Then the conspiracy theorists got involved.  The Pulse massacre was a "false flag."  The shooting victims weren't really shot, they were "crisis actors."  And combining all of the above, for a trifecta of heartless lunacy, we have none other than the inimitable Alex Jones, saying that the shootings and the recent killing of singer Christina Grimmie were false flags engineered by Obama to outlaw guns.

I just have one question, here.  What happened to the tradition of a moment of silence when tragedy occurs?  What happened to showing some respect for the people who have died, and those whose lives have been changed irrevocably?  What about compassion?

And most of all, what about forgetting about yourself and your narrow little worldview for a while, and putting yourself in the shoes of people who are suffering?

Yes, there have been tremendous outpourings of sympathy.  There have been donations of time, money, and blood for the victims.  Such times bring out the best in us, pull us together, tap into unknown wellsprings of love and caring.

But for some, it only tightens them down on fears, anger, and hatred.  And for those people, I have only one thing to say: shut the fuck up.
Posted by Gordon Bonnet at 2:00 AM