I am often stunned by the level of credulity exhibited by some folks.

Take, for example, the incident that occurred a few days ago at a four-day motivational seminar called "Unleashing the Power Within" hosted by speaker Tony Robbins.  According to the article, Robbins's seminars cost between $1,000 and $3,000 to attend, and the high point of the thing is that you get to walk barefoot on red-hot coals. 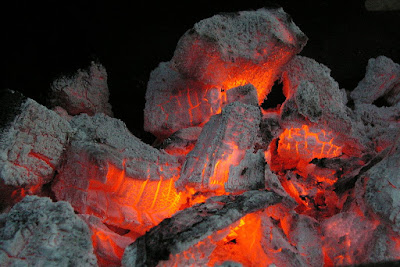 Me, I'd pay $1,000 to avoid having to walk on red-hot coals.  But these people evidently thought this was a great idea.  And to be fair, apparently there are circumstances in which you can walk on coals and not get burned -- and a good, physics-based explanation of how that can happen.

The problem is, it doesn't always work out that way, and when it doesn't, major ouchies occur.  Which is what happened last week in Dallas, Texas...

Now I can see how one person could get burned, or two, or maybe even three.  But you'd think that when the 23rd person shrieked "HOLY FUCK MY FEET ARE BURNING OFF" that the remaining participants would go, "Okay, maybe not."  What did Robbins do, line the participants up in decreasing order of intelligence, or something?

So Dallas Fire Rescue was called in, and thirty people were treated for injuries.

"It felt like someone had taken a hot iron and pressed it against my feet " said seminar participant Paul Gold of West Palm Beach, Florida, who suffered second-degree burns on both feet.  "In hindsight, jumping off would have been a fantastic idea.  But when you're in the spirit of the moment, you're kinda focused on one task."

I dunno, I think I'd have to be pretty damn focused not to think of getting off a bed of hot coals when my feet are about to burst into flame.

Gold added that he thought he'd signed a hold-harmless waiver before participating.  He signed something, he was certain about that, but isn't sure what it said.

Which supports my contention that the firewalkers weren't chosen for their critical thinking ability.

Another participant, Jacqueline Luxemberg, said that part of the problem was that a lot of the participants weren't following the leaders' directions, but were concentrating more on taking selfies and videos.  So look for a rash of Facebook photos with captions like, "This is me just before my lower legs caught on fire."

Look, I'm all for facing your fears.  There is something pretty empowering about facing down something you thought you couldn't handle, achieving a goal you were sure you would never manage.  But there are far better ways to do it than tromping across a bed of red-hot charcoal briquets.  For one thing, whether you get burned or not has nothing to do with your mental state -- it's physics, pure and simple.  Second, there's a decent chance you'll end up with blisters all over the soles of your feet, which has got to make walking uncomfortable for a week or two thereafter.

And third, you're putting thousands of dollars into the hands of people who are trying to convince you that walking on hot coals is a great idea.  Myself, I can think of lots of other uses for a thousand bucks than giving it to Tony Robbins.  Add to that the woo-woo mystical trappings a lot of those people weave into their presentations, and I'll get my motivation elsewhere, thanks.
Posted by Gordon Bonnet at 3:37 AM