Back in the 1950s, scientists were beginning to identify a causal connection between smoking and lung cancer.  Prior to that, there was an extensive advertising campaign to convince the public that smoking was actually good for your health: 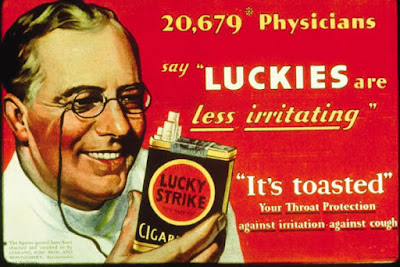 Once the connection between tobacco use and a whole host of ailments became clear, tobacco company executives were quick to see what was happening -- and to launch their own disinformation campaign.  Public relations firm Hill & Knowlton, hired to manage the situation, made their approach clear in documents that have only recently come to light:


We have one essential job -- which can be simply said: Stop public panic…  There is only one problem – confidence, and how to establish it; public assurance, and how to create it...  And, most important, how to free millions of Americans from the guilty fear that is going to arise deep in their biological depths – regardless of any pooh-poohing logic -- every time they light a cigarette.

Industry officials made sure that the consumers viewed them as open and transparent, not to mention caring about their customers' health.  A 1953 public statement from the Tobacco Industry Research Committee included the following disingenuous comment:


We will never produce and market a product shown to be the cause of any serious human ailment…  The Committee will undertake to keep the public informed of such facts as may be developed relating to cigarette smoking and health and other pertinent matters.

Except for the fact that they were doing exactly that -- doing everything in their power to cast doubt upon the research, and actively suppressing the research of scientists who were working in the field.  In 1954, TIRC issued a "Frank Statement to Cigarette Smokers:"


Some industry operatives actually thought about trying to turn the crisis into an opportunity.  A researcher at Philip Morris wrote:


Evidence is building up that heavy smoking contributes to lung cancer.  But there could be benefits to any company with the intestinal fortitude to jump on the other side of the fence, admitting that cigarettes are hazardous.  Just look what a wealth of ammunition would be at his disposal to attack the other companies who did not have safe cigarettes.

That three-pronged approach -- discredit the scientists, sow doubt in the minds of ordinary citizens, and portray the industry as caring and concerned -- must be sounding awfully familiar, if you've been reading the news lately.  Because we're seeing the whole scenario play out again, this time with regards to climate change.

The scientists don't agree.  There is no consensus.  Besides, the climate researchers who argue the most vehemently that anthropogenic climate change is happening are probably being paid to say so by eco-wackos like Earth First.  And think about it -- wouldn't it be nice if the world warmed up a little?  Just think, upstate New York would be snow-free.  You could grow palm trees in Maine.  And in any case, doing anything about it would be (choose any that you think apply): (1) economic suicide; (2) disastrous for states that depend on oil, gas, and coal; (3) the cause of massive unemployment; or (4) impossible in any case.

This cynical move by the fossil fuel industry to play on the doubts, fears, and ignorance of the general public is exactly analogous to the strategies of the tobacco industry fifty years ago.  Of course, in the latter case, the facts eventually came out despite their best efforts, along with their role in trying to cover up the correlation.  And now, it's to be hoped that history is once again repeating itself, with the Department of Justice getting involved -- and pursuing an investigation to find out whether industry giants like Exxon-Mobil actively suppressed climate change research, and lied to their investors about the dangers.

Like back in the 1950s, however, the industry has political clout, and there are elected officials whose debt to the corporate world is higher than their ethical standards.  Just last week, five senators -- Ted Cruz, Mike Lee, Jeff Sessions, David Vitter, and David Perdue -- signed a letter demanding that the Department of Justice halt their inquiries.  "We write today to demand that the Department of Justice (DoJ) immediately cease its ongoing use of law enforcement resources to stifle private debate on one of the most controversial public issues of our time," the letter states.

The problem is, it's not controversial any more, any more than the connection between tobacco and lung cancer was controversial fifty years ago.  This is a manufactured controversy, with one aim in mind -- providing protection for fossil fuel markets.  The industry, and their mouthpieces in so-called "think tanks" like the Heartland Institute, know full well that what they are doing is affecting global temperatures.  Anyone who can read a scientific paper can no longer claim that the issue is undecided.  What they are doing is denying reality to save their profit margin, damn the cost to the future.

And that future is looking like it's coming awfully soon.  Sea level rise is already taking its toll -- interesting that David Vitter's home state of Louisiana is one of the first places to see the effects, with a coastal island called Isle St. Charles having already lost over 50% of its land area to flooding from rising waters in the Gulf of Mexico.  Its residents have applied for, and received, a $48 million grant from the Department of Housing and Urban Development -- not for levees and flood mitigation, but simply to resettle as eco-refugees.

It's to be hoped that the officials in the Department of Justice will respond appropriately to Cruz, Vitter, et al., to wit, with a phrase that ends with "... and the horse you rode in on."  I'm optimistic that just as with the lung cancer deniers back in the 50s, today's climate change deniers will eventually be steamrolled by facts, evidence, and research.  The dangers of tobacco became public too late to save tens of thousands of lives, however -- perhaps we'll wise up sooner this time.
Posted by Gordon Bonnet at 2:04 AM