I was reading a book (about interjections, oddly enough) yesterday which included the phrase “In these days of political correctness…” talking about no longer making jokes that denigrated people for their culture or for the colour of their skin.  And I thought, “That’s not actually anything to do with ‘political correctness’.  That’s just treating other people with respect.”

Which made me oddly happy. I started imagining a world in which we replaced the phrase “politically correct” wherever we could with “treating other people with respect”, and it made me smile.

You should try it.  It’s peculiarly enlightening.

Which I agree with, for the most part.  Gaiman is right that people often use "political correctness" as a catchall to cover their own asses, to excuse themselves for holding opinions that are bigoted or narrow-minded.  To me, the phrase has come to be almost as much of a red flag as when someone starts a conversation with, "I don't mean to sound racist/sexist/homophobic, but..."

On the other hand, there is an undeniable tendency in our culture to equate "offensiveness" with "having our opinions challenged."  Witness, for example, the professors at the University of Northern Colorado who are being investigated for offending their students -- by presenting, and asking students to consider, opposing viewpoints.

One professor was reported for asking students to think and write about conflicting views of homosexuality in our society.  As part of the assignment, the professor had asked students to consider the following:  "GodHatesFags.com: Is this harmful?  Is this acceptable?  Is it legal?  Is this Christianity?  And gay marriage: Should it be legal?  Is homosexuality immoral as Christians suggest?"

Note that the professor wasn't saying that homosexuality is immoral, or that the answer to any of the other questions posed above was "yes;" (s)he was asking the students to consider the claim, and creating an evidence-based argument for or against it.  The student filing the complaint didn't see it that way.

"I do not believe that students should be required to listen to their own rights and personhood debated," the student wrote.  "[This professor] should remove these topics from the list of debate topics.  Debating the personhood of an entire minority demographic should not be a classroom exercise, as the classroom should not be an actively hostile space for people with underprivileged identities."

Because learning how to counter fallacious arguments with facts, and answer loaded questions rationally, somehow creates an "actively hostile space." 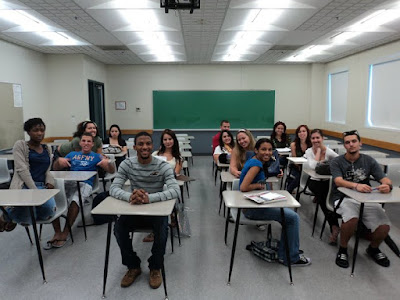 [image courtesy of photographer Fredler Brave and the Wikimedia Commons]

The second professor's case is even more telling, as it came about because (s)he had assigned students to read the famous article by Greg Lukianoff and Jonathan Haidt called "The Coddling of the American Mind," which addresses precisely the problem I'm writing about in this post.  After reading the paper, the professor asked the students to consider the questions raised by the article, specifically the issues of "trigger warnings" for minorities such as homosexuals and transgender individuals in reading controversial material.

"I would just like the professor to be educated about what trans is and how what he said is not okay because as someone who truly identifies as a transwomen [sic] I was very offended and hurt by this," one student wrote in the complaint.

The university complaints office backed the student.  The professor was instructed not to interject opinions into his/her lessons -- including those of the authors who wrote the article.

So there's something to be gained by having students avoid all opinions that they disagree with?  If they think they're not going to run into those once they leave college, they're fooling themselves -- and if they haven't been pushed into thinking through how to respond to bigots and people who are simply ignorant, they're basically choosing to be intellectually disarmed adults.

Students should be forced to consider all sorts of viewpoints.  Not to change their minds, necessarily, but to allow them to think through their own beliefs.  I tell my Critical Thinking students on the first day of class, "You might well leave this class at the end of the semester with your beliefs unchanged. You will not leave with your beliefs unchallenged."

Now, note that I am not in any way trying to excuse teachers (on any level) who try to use their classrooms as a field for proselytizing.  I only have the one source for the incidents at the University of Northern Colorado, and there might be more to the story than I've read.  If these professors were using their positions of authority to press their own bigoted viewpoints about gender and sexual identity on their students, they deserve censure.

But I suspect that's not what's going on, here.  We've become a polarized society, with half of us lambasting the political correctness movement and simultaneously feeling as if their right to free speech makes it acceptable to offend, and the other half afraid to voice an opinion for fear of treading on some hypersensitive individual's toes.  What's lost is the opportunity for civil discourse -- which, after all, is one of the best and most reliable pathways toward learning and understanding.
Posted by Gordon Bonnet at 3:16 AM