The price of free speech

It's been kind of a grim week here at Skeptophilia.  The news over the last few days has been seriously depressing, what with the current political situation, the attack in Orlando (and the chest-thumping by ideologues that followed), and the ongoing turmoil in so many parts of the world.  And much as I'd like to return to my happy world of making fun of people who believe in Bigfoot, aliens, and telepathy, I'm afraid we have (at least) one more rather dismal topic to cover.

This one comes up because of Newt Gingrich, who (according to informed sources) is currently hoping to be chosen as Donald Trump's running mate.  And in what looks like a bid to align himself with Trump's "'Murica!  Fuck Yeah!" platform, Gingrich has proposed recreating the House Committee on Un-American Activities. 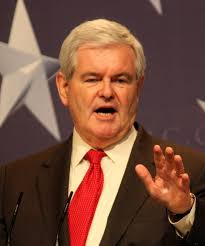 You probably know that the original such committee was founded back in the 1930s, first to keep track of (and stop) any infiltration into the United States by the Nazis, and later to do the same thing with the communists.  The committee did nab a couple of Soviet spies -- notably Elizabeth Bentley and Whittaker Chambers -- but in the process blacklisted hundreds of people whose only crime was attending communist party meetings (or even being friends with someone who had).  Eventually, criticizing the government was all it took (as folk singer Pete Seeger found out).  Careers and reputations were ruined, and the gains in terms of national security were debatable at best.

Now, of course, the target is different; Gingrich wants to go after people with Islamist leanings.  "We originally created the House Un-American Activities Committee to go after Nazis," Gingrich said during an appearance on Fox and Friends this week.  "We passed several laws in 1938 and 1939 to go after Nazis and we made it illegal to help the Nazis.  We're going to presently have to go take the similar steps here... We're going to ultimately declare a war on Islamic supremacists and we're going to say, if you pledge allegiance to ISIS, you are a traitor and you have lost your citizenship.  We're going to take much tougher positions."

Which sounds like a credible position at first.  I certainly have no reason to defend people who have dedicated themselves to ISIS, or whose political and religious beliefs impel them to come over here and harm American citizens.

But the problem is, how do you find out who those people are before they act?  The FBI already monitors people who are suspected Islamists, not that such efforts are foolproof.  But Gingrich seems to be proposing further measures, taking legal action against people who have committed no crime, who have only subscribed to the wrong ideology.

Me, I find this troubling.  It's a slide toward imprisoning people for thought crimes, and one step away from abrogating the right to free speech.

And lest you think I'm overreacting, here; just two days ago, Donald Trump revoked The Washington Post's press credentials because he objected to perceived criticism by the media.  "Based on the incredibly inaccurate coverage and reporting of the record setting Trump campaign," he said in a statement, "we are hereby revoking the press credentials of the phony and dishonest Washington Post."


Donald Trump's decision to revoke The Washington Post's press credentials is nothing less than a repudiation of the role of a free and independent press.  When coverage doesn't correspond to what the candidate wants it to be, then a news organization is banished. The Post will continue to cover Donald Trump as it has all along -- honorably, honestly, accurately, energetically, and unflinchingly.  We're proud of our coverage, and we're going to keep at it.

Which is it exactly.  If free speech means anything, it must involve allowing citizens to criticize the government.

So the whole thing is moving in a decidedly scary direction.  Look, it's not that I don't appreciate how hard it must be to craft policies that will protect American citizens, insofar as it is possible, from outside threats.  I can't imagine being tasked with monitoring anyone who is suspicious, and making the right call with respect to when to move in and make arrests -- especially given the backlash either way if you're wrong.

But I do know that restricting the right to free speech, muzzling the media, and harassing Americans for perceived "un-American activities," is not the way to go.  We tried it once before, and it didn't work out so well.  The price of free speech is risk -- but it's a cost that is well worth what you gain.
Posted by Gordon Bonnet at 2:10 AM