Last week, Switzerland opened the Gotthard Base Tunnel, which at 57 kilometers is the longest underground traffic tunnel in the world.  The entire project took twelve years to complete, and cost over $12 billion.

All of which is cool enough, but things got even more interesting at the inauguration ceremony last week.  Because the powers-that-be saw fit to open the tunnel with a performance that can only be described as "really fucking weird."  It started with bunches of people in hard hats and orange jumpsuits doing a slow march into the tunnel, followed by their doing some kind of strange interpretive dance involving headbanging.  Then came a whole bunch of people wearing tiny tight garments that left you in no doubt about the size and shape of their naughty bits.  The almost-naked people proceeded to have what appeared to be a cross between a square dance and an aikido tournament, all while being watched over by an image of a very old lady with a creepy, knowing smile.

After this came some white Dementors flying around.  Then the almost-naked people came back, covered in gauzy veils, wearing expressions of extreme angst.  This was followed by about a dozen people flailing about wearing wigs and swinging around yards of swoopy material.  In the midst of which was a guy dressed up like a goat.  Some of these people were wearing suits with long colorful dreadlocks, sort of like Cousin Itt gone punk.

The whole thing culminated with the appearance of a huge-headed baby with wings. 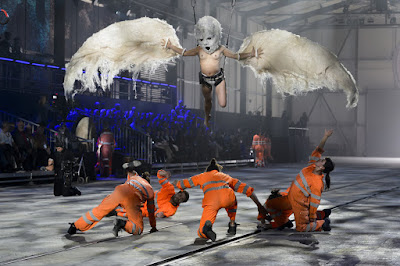 I would strongly recommend watching the entire thing.  (Here are links to part I and part II.)  The whole time I watched it, I was thinking, "Who planned all of this, and what mind-altering chemicals had they just ingested?  And can I have some?"  I'm sure all of it was supposed to have deep significance and relevance to Swiss history and culture, but mostly what it did for me was cause me to say "What the fuck?" about 47 times.

But people do trippy things all the time, so my purpose here is not simply to report about a performance that looks like what J. K. Rowling would come up with if you gave her acid and then told her to write a script for a sequel to Zardoz.  The reason this comes up on Skeptophilia is the reaction of people who saw the ceremony.

Because large numbers of folks are completely freaking out over this.  Here is a variety of responses, gleaned from people who commented on the video and/or blogged about it:

So.  Okay.  Will all of you people just calm down for a moment?

The ceremony was bizarre, I'll grant you that, but I would strongly suspect that if Satan exists it takes more than bare-chested guys in tightie-whities jumping around on a train platform to summon him up.  What this looks like to me is an off-kilter experiment in modern dance, not an appeal to Lucifer.

A few other points:
Anyhow, that's our visit to the wacko fringe for the day.  If you're in Switzerland, make a point of taking a train through the new tunnel.  It'll significantly cut your travel time, and you'll have a nice tour of the nine circles of hell.  Such a deal.
Posted by Gordon Bonnet at 2:00 AM