Yesterday we heard about how some oddly-shaped markings on Pluto are evidence of an extraterrestrial base, or possibly the home of intelligent fungus-creatures, as hath been prophesied in the writings of H. P. Lovecraft.  Today, we find out that...

The whole thing comes up because of a cool archaeological discovery, that a dagger found in the hoard buried with King Tut had a blade forged from a meteorite.  The paper describing the research, written by Daniela Cornelli et al. and published last week in Meteoritics and Planetary Science, had the following to say:


Scholars have long discussed the introduction and spread of iron metallurgy in different civilizations.  The sporadic use of iron has been reported in the Eastern Mediterranean area from the late Neolithic period to the Bronze Age.  Despite the rare existence of smelted iron, it is generally assumed that early iron objects were produced from meteoritic iron.  Nevertheless, the methods of working the metal, its use, and diffusion are contentious issues compromised by lack of detailed analysis.  Since its discovery in 1925, the meteoritic origin of the iron dagger blade from the sarcophagus of the ancient Egyptian King Tutankhamun (14th C. BCE) has been the subject of debate and previous analyses yielded controversial results.  We show that the composition of the blade (Fe plus 10.8 wt% Ni and 0.58 wt% Co), accurately determined through portable x-ray fluorescence spectrometry, strongly supports its meteoritic origin.  In agreement with recent results of metallographic analysis of ancient iron artifacts from Gerzeh, our study confirms that ancient Egyptians attributed great value to meteoritic iron for the production of precious objects.  Moreover, the high manufacturing quality of Tutankhamun's dagger blade, in comparison with other simple-shaped meteoritic iron artifacts, suggests a significant mastery of ironworking in Tutankhamun's time.

Which is pretty darn cool.  The dagger is gorgeous, too:

But of course, "cool archaeological discovery" isn't enough for some people.  The fact that King Tutankhamun had a dagger made from a meteorite (or at least was buried with one) has to mean that the Boy King himself had ancestry from outer space.

Tut's father was the oddball King Akhenaten, who attempted to abolish the national polytheistic religion and replace it with a more-or-less monotheistic worship of the Sun ("Aten"), with predictable results.  The road to popularity does not come from a political figure saying, "You all need to change what you believe right now."  (In fact, the only time I've ever heard of a state religion being decided by decree, peacefully, was the Christianization of Iceland in the year 1,000 C.E., in which the people let the leaders decide if they were going to follow the Christian god or the old Norse gods.  The leaders decided on Christianity, and the entire nation submitted to baptism without a drop of blood shed.)

Be that as it may, Akhenaten was an odd dude.  In depictions of him -- those that survived the wholesale re-conversion of Egypt to the old polytheistic religion at his death -- he is even a strange-looking fellow, with a long, thin face, skinny arms, and a pot belly.  So it's not to be wondered at that the aliens-and-spaceships cadre decided that he couldn't possibly be human. 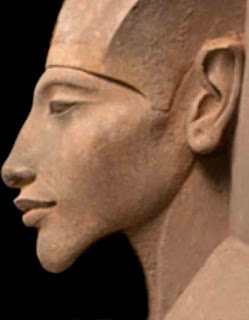 So we have the following appearing over at the wonderful site Ancient UFO:


One of the most interesting characteristics of Akhenaten, is that he is always depicted with a long, elongated skull.  Most Egyptian scholars have attributed this to artistic style peculiar to his reign.  Surely though, it is more likely that he actually had an enlarged cranium?  Artistic depictions of Akhenaten, usually show him with an elongated head, wide hips and a round belly.  It has been suggested by researchers that these features are attributed to a disorder called Froehlich’s Syndrome.  This disorder is typified by an elongated face and an androgynous figure...  [But] could this be because Akhenaten was perhaps actually extraterrestrial?

And now, they say, we have the clincher; a dagger whose blade came from outer space.

The problem is, the dagger was made from a meteorite.  I.e., a piece of space rock that struck the Earth.  The ancient Egyptians didn't have to go out into space to mine it, or anything.  The fact that they used meteoritic iron just means they were clever about using stuff they found, not that they were aliens.  King Tut's having a dagger with a blade made from a meteorite doesn't mean that he was half-alien any more than my possession of a t-shirt made in China makes me Chinese.

Of course, the problem is the usual one; the woo-woos in question had already decided that Akhenaten was an alien, so the dagger was just one more bit of confirmation bias in their favor.  So my saying all of this certainly won't stop the speculation.  Look for a highly scientific documentary on Tutankhamun's alien ancestry to show up on the This Really Isn't History Channel soon.
Posted by Gordon Bonnet at 3:31 AM