I don't know about you, but I get tired fighting the same battles over and over.

I'm all for treating people with respect regardless of whether or not they agree with me, but at some point, it's a sore temptation, after the 4,583rd time of explaining something patiently and calmly and receiving the same damn stupid response, to scream, "ARE YOU A MORON?  OR WHAT?" right in their faces.

This point has been reached with Franklin Graham.  Franklin is the son of evangelical preacher Billy Graham, for whom I've always had a lot of respect even though we see eye to eye on basically nothing.  The elder Graham always seemed to me kind and compassionate and well-spoken, and respectful of others even when he disagreed with them.  The younger Graham, however, gives every evidence of being a snarling, frothing religious extremist.

And also not very smart.  I, personally, don't think "Separation of Church and State" is that hard a concept.  Simply put, if it's government sponsored or paid for by tax dollars, religion should keep its nose out -- or, if one religion is allowed in, they all should have equal access (as should atheism and agnosticism).  But since the people who are for breaking down the barrier between church and state generally are only talking about one church (guess which one), that distinction has to be explained over and over and over again.

This time, the whole thing got started because of Child Evangelism Fellowship's sponsorship of "Good News Clubs" in elementary schools, aimed at getting the evangelical Christian message out to young kids in public schools.  This caused some secular groups to sponsor "Better News Clubs" about rationalism and skepticism, but those never really got much press.

What caught people's attention was when the Satanists got involved.

The Satanic Temple is now sponsoring "After School Satan Clubs" (affectionately known as ASS Clubs) in all elementary schools that have a Good News Club.  And lest you think it will involve sacrificing goats or something, here's their message:


It’s important that children be given an opportunity to realize that the evangelical materials now creeping into their schools are representative of but one religious opinion amongst many.  While the Good News Clubs focus on indoctrination, instilling them with a fear of Hell and God’s wrath, After School Satan Clubs will focus on free inquiry and rationalism, the scientific basis for which we know what we know about the world around us.  We prefer to give children an appreciation of the natural wonders surrounding them, not a fear of everlasting other-worldly horrors.

To which I can only respond: Booyah. 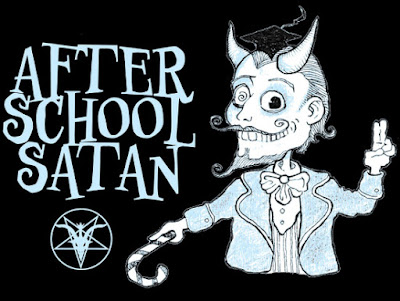 I would attend solely on the basis of the fact that their poster kicks ASS.

Well, far be it from someone like Franklin Graham to get the point of this -- which is not to turn kids into practicing Satanists, but to (1) teach them about critical thinking, and (2) to illustrate why Separation of Church and State is there in the first place.  And it's not like this hasn't happened (lots of times) before, from Satanists and atheists pushing to give invocations at government meetings, to the guy who insisted that a rainbow-colored Festivus pole be erected in the Florida State Capitol Building alongside the Christmas tree.

Graham, however, does not appear to be intelligent enough to comprehend the fact that just as he would not want his kids railroaded into becoming atheists (or Satanists) in public school, I would not want mine sitting in a room with a Christian proselytizer.

"Pray for parents and school leadership to have wisdom to refuse these After School Satan Clubs!" Graham tweeted, along with a message that good Christians must work against "the devastating effects of secularism everywhere" and pray that Satanic Temple leader Lucien Greaves see the error of his ways and devote his life to Jesus.

This puts school administrators in an interesting bind.  The ones who okayed the Good News Clubs are now in the position of having to approve the After School Satan Clubs, or deny them both -- else they're very likely to be facing a lawsuit from the Freedom From Religion Foundation.  And for all of Graham's sputtering, nothing's going to change the fact that right now, any administrator who keeps the Christian clubs and denies the Satanist ones is in breach of Separation of Church and State.

But since Graham hasn't caught on to that the previous times it's happened, I'm not expecting him to now.
Posted by Gordon Bonnet at 2:50 AM