Bring on the documentaries

I was in my junior year of college when Carl Sagan's Cosmos first aired.  I, and several of my friends, were absolutely riveted.  After each episode we'd eagerly discuss what we'd learned, what amazing stuff about the universe Dr. Sagan had expounded upon.  I was blown away both by the visual artistry (although it looks antiquated today, back in 1980 it was seriously impressive), and by the music, which was and is absolutely stunning. 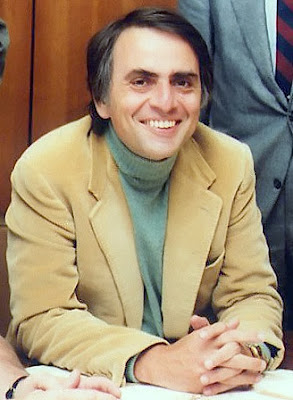 I also remember, however, the backlash Sagan himself received from other scientists.  He was derided as a "popularizer," scorned as someone who presented pretty pictures and watered down, common-language analogies rather than actual hard science.

I thought this was pretty mean-spirited, but I didn't realize how common that perception was in the scientific world.  Four years later, as a graduate student in oceanography at the University of Washington, I found out that there was really only one pair of words that was considered so vulgar that no one was allowed to utter it: "Jacques Cousteau."  Cousteau was an object of derision, not a "real scientist" at all, just a guy who spoke in a cheesy French accent and liked to get filmed while scuba diving.  In fact, my adviser once told me that he made a point of never accepting a graduate student who mentioned Cousteau's name in their interview.

So this irritation with people who make science accessible to the layperson runs deep, although I have to hope that this is changing, with a few truly first-rate scientists writing books to bring the latest research to the masses (Stephen Hawking, Sean Carroll, Brian Greene, Kip Thorne, Roger Penrose, Lee Smolin, and Lawrence Kraus come to mind).

It's a good thing.  Because to judge from a piece of research published this week in Advances in Political Psychology, there's more to be gained from popularizing science than just encouraging children to pursue science as a career; fostering a fundamental curiosity about nature is essential to eradicating biased thinking across the board.

Called "Science Curiosity and Political Information Processing," the paper, written by Dan Kahan of Yale University et al., looks at how best to move people from leaning on their own preconceived notions to evaluating the strength of claims based on evidence.  The research looked at how watching science documentaries engenders a curiosity about how the world works, and correlates with a lower likelihood of biases in arguments on subjects like anthropogenic climate change.

Kahan spoke with Chris Mooney, science writer over at The Washington Post, and explained what the research by his team had shown.  "It just so happened that, when we looked at the characteristics of [people who watch science documentaries], they seemed to be distinct politically," Kahan said.  "They stood out by being, as a group, less likely to feed the current polarization of political opinion on scientific matters such as climate change.  The data we’ve collected furnish a strong basis for viewing science curiosity as an important individual difference in cognitive style that interacts in a distinctive way with political information processing."

The most fascinating part of the research is that the difference doesn't seem to be related to scientific training, but scientific curiosity.  Having established a scale for measuring curiosity, Kahan et al. looked at both liberals and conservatives and assessed them for biased thinking.  Mooney writes:


Armed with the scientific curiosity scale, Kahan’s new study first demonstrated that while liberal Democrats and conservative Republicans with higher levels of proficiency in scientific thinking (which he calls “ordinary science intelligence”) tend to become more polarized and divided over the scientifically supported risks involved in both climate change and fracking, Democrats and Republicans with higher levels of science curiosity don’t.  Rather, for both groups, the more curious they are, the more their perceptions of the risks tend to increase...  [T]he study also contained an experiment, demonstrating that being possessed of heightened levels of scientific curiosity appeared to make political partisans more likely to read scientific information that went against their predilections.

The final statement is, to me, the most important.  An absolutely critical feature of the scientific view of the world is the ability to continually question one's base assumptions, and to look at the data with a skeptical eye.  And I am not using the word "skeptical" to mean "doubting," the way you hear people talk about "climate change skeptics" (a phrase that makes my skin crawl; no actual skeptic could consider the evidence about climate change questionable).  I am using "skeptical" in its literal sense, which means giving a rigorous look at the data from every angle, considering what it's telling you and examining the meaning of any trends that you happen to observe.  Which, of course, means entertaining the possibility that your prior understanding may be incorrect.  To me, there is no better indication of a truly scientific mind than when someone says, "Well, after examining the evidence, turns out I was wrong about that after all."

So we should be thankful for the popularizers, who follow in a long tradition of work by such greats as Sagan and Richard Feynman.  Children need to have their curiosity about the universe piqued early, and the flames fanned further by watching cool science shows that open their eyes to what a fascinating place we live in.  Think about what it would be like if we had a nation full of people who were committed to looking at the world through the lenses of evidence, logic, and critical thinking instead of prejudice and stubborn adherence to their own biases.

It's a nice possibility to think about, isn't it?
Posted by Gordon Bonnet at 4:23 AM