One of the problems with scientists being understood by laypeople is that they don't speak the same language.

I'm not just talking about technical vocabulary, here, the ability to throw around words like photophosphorylation and anisotropy and eigenstate.  I'm talking about how they each use fairly simple words -- words like theory and hypothesis and proof.

As an example, consider the kerfuffle over the activation of the Large Hadron Collider, instrumental in the search for (and ultimately discovery of) the Higgs boson.  There was concern, mostly on the part of non-scientists, that the energy released by the collisions within the LHC could cause some untoward effects.  Since one of the metaphors used to describe what was happening therein was "recreating the conditions that were present at the Big Bang" (a statement that in any case is incorrect by several orders of magnitude), people wondered if the activation of the machine might generate mini black holes -- or possibly a new universe, which would expand and tear our universe apart from the inside.

So looking for reassurance, the scientists were contacted, and asked if this was possible.  And that's when the trouble started.

Scientists, for the most part, are extremely careful to differentiate between the words "possible" and "likely."  So they said, sure, it's possible.  Given that we haven't ever achieved collision energies this high, lots of things are possible, including some we probably haven't foreseen.  You can't rule out an eventuality that depends on data we don't have yet.

Well, at that point, the media was off to the races.  Headlines saying "Scientists Admit It's Possible the LHC Will Destroy the Universe!" began to appear.  Only after the hue-and-cry began did the scientists say, "Now, wait just one minute.  We didn't say it was likely.  In fact, it's extraordinarily unlikely."  But by that time no one was listening, because most people were too busy wailing about how we were all gonna die and it was the physicists' fault.

I'm happy to say, though, that not only did we not die when the LHC was activated, the scientists are beginning to learn how to talk to the rest of us.  Witness, for example, the rather annoyed-sounding paper that appeared in Environmental Research Letters a few days ago, entitled, "Quantifying Expert Consensus Against the Existence of a Secret, Large-Scale Atmospheric Spraying Program," by Christine Shearer, Mick West, Ken Caldeira, and Steven J. Davis.  If you're thinking, "wait, this can't be about what it sounds like," well, yes, it is:


Nearly 17% of people in an international survey said they believed the existence of a secret large-scale atmospheric program (SLAP) to be true or partly true.  SLAP is commonly referred to as 'chemtrails' or 'covert geoengineering', and has led to a number of websites purported to show evidence of widespread chemical spraying linked to negative impacts on human health and the environment.  To address these claims, we surveyed two groups of experts—atmospheric chemists with expertize in condensation trails and geochemists working on atmospheric deposition of dust and pollution—to scientifically evaluate for the first time the claims of SLAP theorists.  Results show that 76 of the 77 scientists (98.7%) that took part in this study said they had not encountered evidence of a SLAP, and that the data cited as evidence could be explained through other factors, including well-understood physics and chemistry associated with aircraft contrails and atmospheric aerosols.  Our goal is not to sway those already convinced that there is a secret, large-scale spraying program—who often reject counter-evidence as further proof of their theories—but rather to establish a source of objective science that can inform public discourse.

So this brings up a couple of points.  First, these folks are going about this the right way.  None of this pussyfooting around about how "we can't prove it" or "without evidence, we can't say it's impossible;" Shearer et al. are saying, "No, you loons, there are no such things as 'chemtrails.'"

Second, didn't you just love the comment about how conspiracy theorists "often reject counter-evidence as further proof of their theories?"  That, I believe, is what is referred to in scientific circles as a "mic drop moment." 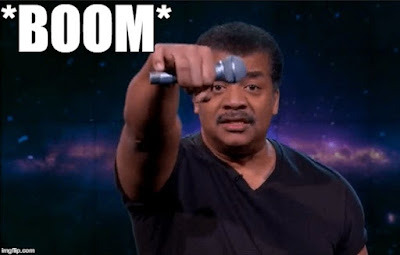 But third, I have to wonder who the 77th atmospheric scientist was, the one who had found evidence of chemtrails.  I'd like to talk to that guy, wouldn't you?

Be that as it may, I think the scientists are figuring out that you can't just assume that everyone gets the way evidence and proof (and disproof) are used in science.  They're becoming bolder about saying things like, "Evolution is a fact," "Anthropogenic climate change is happening," and "Homeopathy is pseudoscientific bullshit."  Unfortunate though it may be, using the more cautious diction that is necessary in a scientific paper just doesn't work when communicating scientific findings to the masses.

Anyhow, that paper cheered me up immensely.  Given that common-sense considerations -- such as the fact that jet contrails would be a really crappy toxin delivery device -- don't seem to dissuade the True Believers, it's time for the scientists to come together and say, "Um... NO."  Not, as they pointed out, that it will convince the True Believers -- but because it will let anyone still on the fence know that there is no discussion about this amongst people who aren't certifiable wackos.
Posted by Gordon Bonnet at 2:46 AM