New on the market for people with more money than sense, we have: magnetized balls that you put in with your laundry to clean your clothes better. 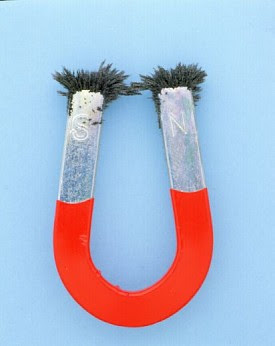 Called the "Life Miracle® Magnetic Laundry System," the idea is that putting magnets in your washing machine will somehow suck dirt particles off the clothes.  Or something like that.  It's hard to tell, frankly, because most of their sales pitch sounds like this:


The concept behind the Life Miracle Laundry System is that you can achieve similar results using a chemical-free, completely renewable magnetic basis, without using non-renewable petrochemicals.  Magnetic force is one of the most powerful forces on earth. In fact, the earth itself is like a giant magnet with a north and south pole. It is an amazing source of natural energy.  Even the weak magnets on your refrigerator defy the force of gravity without batteries or being plugged into any power source.  They will stay on your refrigerator, doing work and holding up papers for decades with no external power source.  Where does all this natural power come from?  From the environment around us.  It is completely renewable and totally free.  We are simply harnessing that amazing force and focusing it in your home washing machine to affect the water.

Since the Earth has such a powerful magnetic field, it's kind of strange that our clothes get dirty in the first place.  If dirt particles were pulled away from your clothes by magnets, seems like all you'd have to do is walk around and the dirt would just fall off.  Or, in the case of really dirty clothes, give yourself a good rubdown with a bar magnet.

Be that as it may, they have a great scientific explanation of how it works:


At an atomic level, everything is affected by magnetics. All you need to do it try is for yourself and see the results with your own eyes.

So there you have it.  Atomic forces you can see with the naked eye!

Later on, though, they throw in a few caveats.  In the FAQs, in fact, we're given an answer to the question of whether the magnet balls will actually get our clothes clean and bright:


That depends on your definition of “clean” and “bright”.  When comparing the usage of the Magnetic Laundry System with laundry detergent, you need to factor in a few things...  We define clean as chemical-free, non-harmful to the wearer and non-toxic to the environment, in addition to being optically acceptable.  But only you, the user and owner of the product can determine that.

So apparently whether the magnets work to make your clothes clean depends on what you mean by "work."

We also find out that the Magnetic Laundry System gives you best results when you also use detergent:

The Life Miracle Laundry System® is a laundry detergent alternative only. Just like when using laundry detergent, separate products used for other functions must be used separately, like spot stain treatments, and whitening bleach products.  These are separate from the Laundry System just as they are separate from detergent... [and] nothing whitens like chlorine bleach, but there are few chemicals that are more toxic for the environment and health.  Bleach is very harsh and damaging to you clothes as well.  That said, if you don’t mind the tradeoffs, you can still use diluted bleach with Life Miracle Laundry System® if you choose.

Then we're told that the magnet balls also don't kill microorganisms, either:


Laundry detergent is not used to kill microorganisms, and neither is the Laundry System, but the cleaning process itself washes away most bacteria.  However, hot water will kill most microorganisms in the water, and a little bleach will do the same (although bleach works best at high temperatures).  An extremely effective natural alternative: Numerous studies show that a straight 5 percent solution of vinegar—such as you can buy in the supermarket—kills 99% of bacteria, 82% of mold, and 80% of germs (viruses).

So you still have to use detergent, bleach, and hot water.  What exactly is it that the magnet balls do, then?

Um... well... they're all-natural!  And non-toxic!  And don't pollute the environment!  And never need to be replaced!

What more can you ask for?

Until today, I didn't realize that the placebo effect applied to doing your laundry, but apparently it does.  Who knew?

So anyway.  Here again we have a good case for why we should put more emphasis on teaching science.  Anyone who has taken an introductory high-school-level physics course would be able to explain why the only way magnets would clean your clothes is if they were covered with iron filings.  For getting anything else washed clean -- especially anything oily -- you need a surfactant.

On the other hand, if they could develop magnets that attract dog hair, I'd be all for it.  As long as the magnets were "chemical-free," of course.  Can't have any chemicals around, you know.  Those things are dangerous.
Posted by Gordon Bonnet at 4:31 AM