Looking down the gun barrel

I have to admit to a fascination with things that are big and powerful and can kill you.

I've read book after book on earthquakes, tornadoes, and hurricanes.  I've told my students that if I hadn't become a science teacher, I'd have been a storm chaser, thus combining two of my favorite things -- meteorology, and things that are big and powerful and can kill you.

I suspect I am not alone in this.  Look at the common little kid fascination with dinosaurs, and which ones tend to be the favorites -- not the peaceful herbivorous dinosaurs, but creatures like the T. rex and the Velociraptor and the Deinonychus, which would happily tear you limb from limb.  Look at the disaster movies, stretching all the way back to such flicks as The Poseidon Adventure.  Look at Twister and The Day After Tomorrow and The Perfect Storm.  Look, if you dare, at Sharknado.  What are they now up to, Sharknado 5 or something?

If not, they should be.

I think this is why a couple of days ago there was an article in The Daily Mail called, "Death Rays From Space: Bursts of Energy From Black Holes Could Wipe Out Life on Earth WITHOUT Warning."  Which brings up a number of questions, the most important of which is, what kind of warning would you expect a black hole to give?  Do you think that a few hours before giving off a Burst of Energy, the black hole is going to post something on Twitter that says, "Beware! I am about to wipe out all life on Earth! #DeathRaysFTW #SorryNotSorry"?

Be that as it may, it turns out that The Daily Mail actually got something right, an eventuality that ranks right up there with the fabled monkeys typing out the script to Hamlet.  There are stars which are capable of giving forth incredible amounts of energy in a very short amount of time.  They're called gamma-ray bursters, and are every bit as scary as they sound.  These things give off as much energy in a few seconds as the Sun will release in its entire ten billion year lifespan.  That, my friends, is what the astrophysicists refer to as "a shitload of energy."

And there's one only 7,500 light years away.  I say "only" not because that's an insignificant amount of distance, but because that's close enough that if the thing was aimed toward Earth and went off, we'd be fucked.  Called Wolf-Rayet 104 (or WR-104 for short), it's a good candidate for a core-collapse supernova followed by a long-duration gamma-ray burst.

Of course, there's no particular reason to get all bent out of shape about it.  WR-104 is thought to stand a good chance of doing its thing not day after tomorrow, but some time in the next hundred thousand years.  And even then, it's pretty certain that the gamma-ray burst would be emitted in narrow jets from the magnetic poles of the star -- thus, it would only be a problem if we were literally looking right down the gun barrel, which most astronomers think we aren't. 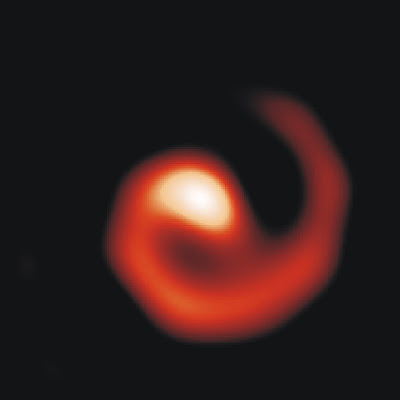 WR-104 [image courtesy of the Keck Telescope and NASA]

That, of course, doesn't stop The Daily Mail from waxing rhapsodic about how we're all gonna die, or at least get converted into the Incredible Hulk or something.  It's happened before, they say -- a gamma-ray burst is what caused the Ordovician extinction, 450 million years ago, that wiped out 85% of all marine life.  It's only later in the article that they admit that this conjecture is "impossible to prove," and even more reluctantly mention that "in a galaxy like ours, a gamma ray burst will happen once every million years, and it would need to be pointing in the right general direction to hit us... So, are they going to kill us?  Probably not."

Is it just me, or do they sound... disappointed by this?  I would think that the idea that the Earth is unlikely to get fried by high-intensity gamma rays would be good news.  But I guess this goes back to what I started with; there's something about dangerous stuff that is attractive.  The idea that the universe is big and scary makes us appreciate even more living in our safe houses, where we are very unlikely to be eaten by velociraptors.

Myself, I think it's the raw power that these kinds of things wield that is the source of the fascination. I remember, as a kid growing up in southern Louisiana, there was something pretty exciting about being in the bullseye of a hurricane.  I distinctly recall standing in my parents' garage during the approach of Hurricane Carmen in 1974.  Just before closing the garage door and retreating inside, my dad and I watched in awe as tree branches and garbage cans flew through the air, rain fell sideways, and lightning struck every ten seconds.  It was scary but thrilling.  (The aftermath -- being without electricity for two weeks, losing everything in the fridge and freezer, and cleaning up all of the damage was distinctly non-thrilling, but the storm itself was pretty exciting, at least to a kid.)

So there's some strange attraction to the dangerous things in the universe.  Even if for most of them, we'd like to observe from a safe distance.  Like gamma-ray bursters.

Not to mention sharknadoes.
Posted by Gordon Bonnet at 3:55 AM