Think you can communicate with the spirits of the dead?

Well, you now have a chance to prove it.

Norwegian Rolf Erik Eikerno was diagnosed a couple of years ago with a terminal disease.  But instead of simply bemoaning his fate, Eikerno saw his illness as an opportunity.  He teamed up with the producers of the television program Folkeopplysningen ("The Public Enlightenment") to set up a puzzle for any would-be mediums.

Eikerno wrote a message on a sheet of paper, sealed the paper in an envelope, and locked the envelope in a vault.  Only the show's producers have the combination to the lock.  No one but Eikerno knows what is written on the paper, nor even whether it was written in Norwegian or English, a language in which he was fluent.

Shortly before his death, Eikerno made a public statement that if he was approached by anyone in the afterlife, he'd be happy to give them detailed information about what was in the note.  The program's staff have put out the following all-call:


Can you make contact with him?  Do you know someone who may be able to do so?

Fill out the form further down in the article if you think you know what Rolf Erik wrote before he died.

IMPORTANT: It is possible to answer only once.  The deadline is September 25th.
This is an experiment conducted by the TV-program "Folkeopplysningen".  Will anyone make contact?  The answer will be revealed in the ultimate episode of this years season, broadcast on Wednesday October 5th.

If you think you might know what Eikerno wrote, you can provide your answer at the link I posted above.

What's interesting about all of this is that it's been tried before.  Harry Houdini left a message with his wife, who offered ten thousand dollars to anyone who could contact Houdini's spirit and tell her what the message was.  She even held a séance every Halloween -- fittingly, the anniversary of Houdini's death -- for ten years, hoping for some contact from her husband's spirit.  Nothing happened, and no one came forward with the correct message, although several tried unsuccessfully.  After ten years, his widow withdrew the offer and stopped having séances, reasoning that ten years was an adequate time for a ghost to make arrangements to contact her.  If she hadn't heard from him by then, she figured, she wasn't going to. 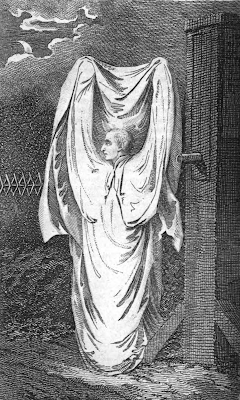 Be that as it may, Folkeopplysningen is going about things the right way.  Here's their description of the program's goals:


Every day we are bombarded with information and claims about what is good for us, what we should be careful about, and what choices we should make to live healthy, good and safe lives.

"Folkeopplysningen" is a TV-program that investigates such claims.  We pick up subjects where there is a discrepancy between what people think they know, what commercial providers claim, and what science is telling us.  While we in the two first seasons scrutinized different kinds of alternative treatments and health related issues, we have been given free hands this year to look at any possible subject.

So sort of a Norwegian version of Mythbusters, without the explosions.

In any case, it'll be interesting to see what turns up, although I'm perhaps to be excused if I'm doubtful anyone will come up with the right answer.  I've always said that my mind is open about an afterlife -- I have no real evidence one way or the other, although I expect that like everyone I'll get some eventually.  On the other hand, the idea that if there's an afterlife, it leaves behind remnant spirits who then can interact with humans -- I'm afraid the evidence is very much against.  If there are any well documented cases of spirit survival that can't be explained either as hoaxes or human gullibility and wishful thinking, I haven't heard about them.

I also doubt if any of the well-known (and well-paid) mediums -- people like Theresa Caputo, John Edward, Sally Morgan, and Sylvia Browne -- will volunteer to try the test out.  They tend not to like those nasty things called "scientifically controlled conditions."  I wonder why that is?

But if you disagree with me, here's your chance to prove me wrong.  As always, evidence and logic are the watchwords around here.
Posted by Gordon Bonnet at 2:32 AM