I have a question for the religious people in the studio audience: don't you get tired of people saying that they've heard something directly from god, and then telling you exactly what god wants you to do?

Such pronouncements become increasingly common around elections, because apparently god is deeply interested in the details of American politics.  Unfortunately, though, his track record is pretty shabby, given that he told Mike Huckabee, Rick Perry, and Ted Cruz that they were all going to get the Republican nomination and float their way into the presidency, and it sort of didn't work out that way.  I've was half expecting every time one of those guys got knocked out of the race to hear a booming voice from the heavens saying, "Ha!  Psych!"

But it didn't happen, more's the pity. 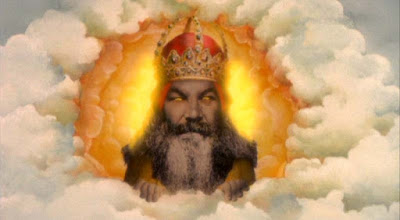 Now, though, we've got two people who are claiming that they are channeling the deity's political views.  The first is, unsurprisingly, Glenn Beck, who has said that he was anointed by god to warn us about what will happen if Donald Trump is elected, thus ushering in the apocalypse:


I can only do what I'm supposed to do, what I feel the Lord has commanded me to do and that is tell the truth.  He has commanded me to do my own homework.  He has commanded me to never compromise on what you truly believe ...  As I started to say in 2004, privately at least, there is a warning in Ezekiel that in those days there will be a watchman on the tower and at the gates.  That means all of us, in our own way, are watchmen on the gates, in your own life.  And if you see trouble coming, you are supposed to warn the people and, if you don't, the blood of everyone who could have heard the warning and could have done something, that blood is on your hands.

This audience is the only hope because you are the only audience that is truly been prepared for these things at this time.  You will be our republic's last line of defense.  So what do I do?  People are telling me, 'At least just shut up.'  I can't.  I can't.  You condemn me if I continue to warn, but God condemns me if I fail to warn.

You may recall that a while back he had a war of words with Trump himself, claiming that Trump wasn't a "true conservative."  He spoke directly to the election on his Facebook page:


History shows a strong man can and always does rise.  Someone who will say "I will restore order."  Do you remember me warning of top down, bottom up and inside out?  I believe this is that moment.

Trump is that strong man.

So at least that's one thing that Beck and I can agree on, not that I needed a deity to point it out; all the good done for the world by "political strongmen."

Beck, however, is not the only person who thinks that he has a direct pipeline to heaven's political wing.  Lance Wallnau, over at Charisma News, has received a message from god that is the exact opposite of what Beck did.  he believes that Trump is the Chosen One, and in fact will drive out evil spirits once he's elected:

There is a spirit assigned to destroy America.  The strategy is laid bare if you read the 51-page democratic platform.  It's the manifesto Hillary is expected to enforce when she is president.  They call this revolution a "reset!"  Read it for yourself.  Under Hillary, America will undergo the final phase of Obama's radical socialist cultural transformation with astonishing speed. Just one man stands in its path...

With 15 candidates running, and many of them strong Christians, it didn't seem likely that Mr. Trump, the business man outsider, would go very far.  But I heard the Lord say something: "Donald Trump is a wrecking ball to the spirit of political correctness."  That was the first word I heard about him.  Immediately I began to wonder what God was doing...

As I traveled to Trump Towers I wondered, how far will this wrecking ball go?  Why would God choose Trump when so many true conservatives and Christians were already running?  Is he an interruption to God's plan or is the battle for America changing in a way we haven't caught up with?...  By putting America first and building a people movement, Donald Trump becomes a wild card that messes up the elite globalists' insider game.  Whatever you bow to on the way up the mountain controls you at the top.

Is it just me, or is it a little odd that the evangelicals are embracing a three-times-married serial philanderer who values money and power over anything else?  This is especially puzzling considering Wallnau's last statement about "whatever you bow to on the way up the mountain controls you at the top."  How can he reconcile this with Jesus's statements about it being "easier than a camel to pass through the eye of a needle than a rich man to enter the kingdom of heaven?"  And "give away everything you have to the poor, and follow me?"  And "blessed are the meek, for they shall inherit the earth?"  And "take care, and be on your guard against all covetousness, for one's life does not consist in the abundance of his possessions?"

Okay, I'll admit that there may be a lot I don't understand, here.  Being an atheist myself, maybe I just don't get how the true believers think.  But it does strike me as a little dangerous to listen to people who tell you that they speak with god's voice.  After all, it pays to consider how often those people will tell you that what god just said happens to agree perfectly with what they already believed.

Odd coincidence, that.
Posted by Gordon Bonnet at 1:57 AM