Hi all... a quick Public Service Announcement before I get to today's post.

My publisher has set up a Facebook fan page for me, where I'll be periodically posting teasers from my fiction, announcing new releases, and discussing writing, reading, and the meaning of life.  I welcome you all to join it and participate -- I'll be checking it often and would love to have some interesting conversations going.  It's called The Bonnet Conspiracy (a nod to Skeptophilia's content) -- head over there and join if you're interested.  Hope to see you there!

You probably remember Ryan and Ammon Bundy, sons of Cliven Bundy, who decided to protest government interference in grazing rights by taking over a bird sanctuary in Oregon.

The Bundys and other members of Yokel Haram occupied the Malheur National Wildlife Sanctuary Headquarters for several weeks before the Feds shot and killed one of them (he was in the process of drawing a gun while running a roadblock) and the remainder decided that discretion was the better part of valor and gave themselves up.

The problem is (from the Bundys' standpoint, at least), "giving up" doesn't mean "all is forgiven."  They're facing multiple felony charges, and since they weren't trying to be sneaky about what they were doing, there is ample evidence for the prosecution to capitalize upon.  So you're an anti-government whackjob who has been caught dead to rights in armed occupation of a federally-owned building -- what do you do?

You claim that you're a sovereign citizen over whom the government has no jurisdiction, of course.

Ryan Bundy has filed several legal statements intended to communicate that he believes that the authorities have no right to press charges against him.  The statements, though, all sound like this:

Alan Pyke of ThinkProgress explains that the use of lower case, the semicolons, and the other weird structure is a hallmark of legal statements from the "Sovereign Citizen" movement, which claims that governments, laws, state and federal boundaries, and so on and so forth are meaningless, and that the rights of the individual cannot be impinged upon by anything or anybody.  They also have this wacky idea that there is a "shadow government," formed of a secret cabal of bad guys (who sound an awful lot like the Illuminati), who are really running the whole show, and who get their hooks into you every time you file any document with the government -- including birth and marriage certificates, applications for driver's licenses, tax forms, and the census.  They then use your documentation as collateral for borrowing money from their evil cohorts around the world to fund their nefarious doings.

Why my birth certificate should be worth anything to a super-secret ring of evildoers in, say, Azerbaijan is kind of a mystery.  But apparently it is.  So therefore lower case letters and semicolons and armed occupation of bird sanctuaries. 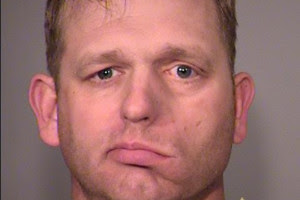 Anyway, trying to escape prosecution by declaring himself an idiot isn't the only thing he's been doing.  Since he's been in jail, he's been stockpiling food (once a survivalist, always a survivalist, I guess), and took a bedsheet and braided it into a rope in an apparent plan for an escape attempt.  The guards objected, oddly enough.  Brought before the judge to defend himself against charges of attempted escape, he said that he was just "a rancher, trying to practice braiding rope."

So his "you can't tell me what to do" strategy seems to be falling on deaf ears so far.  Not that it'll discourage him from trying.  These types don't give up, even though the funny thing is, the sovereign citizen defense never works.  Ask actor Wesley Snipes, who tried it to avoid prosecution for tax evasion.  The judge basically said, "Nice try.  Next time try looking up the definition of the word 'jurisdiction.'  See you in three years."

So I don't expect that it's going to work any better for Bundy et al.  It's a fittingly loony postscript on an event that was pretty surreal from the outset.  You have to wonder how he's going to act once he gets to prison, which seems like the likeliest outcome.  "I refuse to share a cell.  Sovereign citizens require private quarters, as befits someone who rules his own destiny.  And steak for dinner every night."

To which I expect the warden will respond, "What we have here is... a failure to communicate."
Posted by Gordon Bonnet at 4:12 AM