A new study has shown that dogs actually understand more about human language than we thought -- and do so using the same regions of the brain that humans use when interpreting spoken words.

It was conventional wisdom that dogs picked up on tone of voice, but (for the most part) not on the words spoken -- that you could say "you stupid animal, why didn't you come the first 1,293 times I called you?" in a sweet, loving tone, and the dog would still think you're saying something complimentary.  But now a team lead by Attila Andics of Eötvös Loránd University in Budapest has shown that dogs seem to understand a great deal more of what we say than we thought. 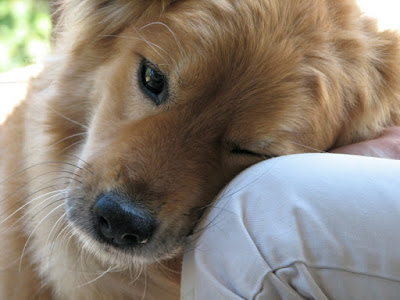 Using dogs who had been trained to lie motionless inside an fMRI machine, Andics and his team had a trainer speak various phrases to the dogs, using different combinations of praising and neutral tones with positive, neutral, and negative verbiage.  The astonishing results were that the dogs processed the intonation information in a different part of the brain than the verbal information, and the strongest positive response came from a praising intonation with praising words.

"This shows… that dogs not only separate what we say from how we say it, but also that they can combine the two for a correct interpretation of what those words really meant," Andics said.

I find this surprising in one way -- that dogs have a far more advanced linguistic capacity than we realized -- but entirely unsurprising in another.  We have as a species tended to consider other animals as somehow qualitatively different from ourselves -- thus the distinction between "human" and "animal" that you still hear people use.  Very few cultures looked upon humanity and the animal world as a continuum, with humans simply being an animal species that has evolved to be smart enough to consider the question.

The sad thing is that up until recently, scientists have contributed to the problem.  I remember when I took Animal Physiology in college, and looked fairly aghast when the professor did something pretty awful to a lab animal (I won't recount what he did, out of respect for the feelings of the more sensitive members of the studio audience), he laughed and said, "You're not going to get far in this subject if you think animals should be treated the same way you'd treat humans."  There was for decades an ongoing battle over whether non-human animals experienced emotions, a debate that was finally put to rest mainly because of detailed studies of elephants.

I have always contended that the people who thought that other animals had nothing analogous to human emotions must never have owned a pet.  Our dog Grendel went into a prolonged period of mourning when his pal, our border collie Doolin, died three years ago at the grand age of 16.  And he gets really bent out of shape when my wife Carol is out of town at an art show -- and is beside himself with joy when she comes back.

But the thing about understanding the verbal content of speech, and not just the tone, did come as a bit of a surprise to me.  Even more fascinating is the authors' speculation about the source of this capacity.  They suggest that the origin of the language-comprehension ability in dogs is not likely to be due to domestication, which would have been my guess -- they say that such a complex neural firing pattern in the brain, not to mention the fact that it's shared by humans not only in structure but in function, makes it much more likely that we're looking at a deep evolutionary relationship that "links arbitrary sounds to meanings."  So language might be a far older, and far more widespread, innovation in the animal world than we thought.

So I guess I'll have to apologize to my coonhound, Lena, for telling her at ten o'clock last night that allowing herself to get sprayed by a skunk made her "a disgrace to the entire canine species, and I hope she's satisfied with herself."  I did give her a cookie after she allowed Carol and I to bathe her in a combination of water, dish soap, baking soda, and hydrogen peroxide, but if Andics and his team are right, she's still probably pretty upset about the whole thing.
Posted by Gordon Bonnet at 1:56 AM