The necessity of compassion

Yesterday I ran into the story of Sigourney Coyle, the high school student in Emmaus, Pennsylvania who is claiming she is being discriminated against because of the school's policy to allow transgender students to use the locker room and bathroom of the gender they identify with:

I am a woman, and I identify as a woman, and you can't make me change in front of someone who I don't identify with who is physically male...  Gym requires us to participate to pass high school and if I don't change I'm not allowed to participate.  So my options are to let myself be discriminated against or fail gym for not participating and not pass through high school, which would jeopardize my future...  I feel nothing against transgenders, I would just not like their rights to overrule mine.

Sigourney's mother, Aryn Coyle, tried at first to have her daughter excused from PE on religious grounds, but was told that religious exemptions only applied to the curriculum on sexuality in health class (which is a topic for a whole other post some time).

So Sigourney is painting this as her rights being trampled.  Not, of course, as a step toward treating with humanity and compassion a group of people who have been systematically demonized, ridiculed, bullied, and discriminated against.  And this stance is not because of any actual identifiable risk; according to studies conducted by the Human Rights Campaign and the National Center for Transgender Equality, the number of times a non-transgender person has been harassed or otherwise accosted in a bathroom or locker room is...

... zero.  The Advocate reports that "there has never been a verifiable reported instance of a trans person harassing a cisgender person, nor have there been any confirmed reports of male predators 'pretending' to be transgender to gain access to women's spaces and commit crimes against them."

As Elisabeth Parker put it in a pointed piece in American News X, "Despite all those transgender bathroom laws GOP state legislatures keep passing, a child is far more likely to be molested at church." 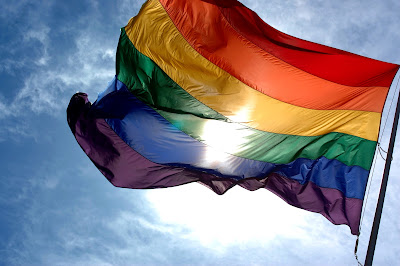 That's not the way the Coyles see it.  Their dogmatic stance that anything except straight cisgender identification is wrong is pushing Sigourney into a position where she is risking her high school diploma to make their bigoted point hit the front page of the newspaper.

Oh, and did I mention that there are no self-identified transgender students currently at Emmaus High School?  That's right: the Coyles are blowing this issue up to maintain their right to discriminate against people who may not even exist.

But just so we can end on a good note, let's take a look at what happens when you do religion right.  Yesterday NPR did a piece on Reverend Danny Cortez, pastor of the New Heart Community Church of La Mirada, California (which belongs to the Southern Baptist Convention), who back in 2014 found himself in a philosophical bind when his son, Drew, came out as gay.  He agonized over it for some time, but finally realized what he had to do.  He went into his church, and preached a sermon that should be required reading for any folks who are on the fence about LGBT issues for religious reasons.  I want you to read the entire thing, which is available at the link I posted, but here's a particularly poignant excerpt:


The last night [at a conference on LGBT Christians and their struggles], I met a man by the name of Coyote.  He approached me, thanking me for my story—I told some people about my journey.  He said, “This conference is meaningful for me and my friends because this is the only church we get to go to once a year.”

He said, “In the places we live, in the small communities, there are no churches that will accept us.”

And my heart broke.  I thought, “That really sucks.”

So, when I was asked the question recently, “How does it feel to know that you might be terminated in a few weeks?”  I said, “I am at peace.”  I’m at peace because I know my heart has been enlarged for people like Coyote who need a church.  I know that whatever happens, compassion is giving me clarity. It’s giving me clarity in my calling; it’s giving me clarity in my purpose.  People like Coyote, they need a church.  They need to be pastored.  They need a community of people that will not judge them because of their sexual identity.

So, I pray that as a church we would open ourselves to how God directs us, and I caution you to realize that it’s so easy to look at the word of God and merely look at the letter of the law.  But there is something underneath it, a deeper current that is only understood by the Spirit, moved by love, and drawn into compassion.  Our thoughts cannot just be about arguing the biblical text.  It must be understood in the context of love, and that means in the context of real, human relationships.  Because compassion is what gives clarity to this matter.

In fact, that's what's missing from the entire battle surrounding the Coyles and Emmaus High School; any mention of compassion, any acknowledgement that what they're talking about aren't voiceless abstractions but real living, breathing human beings who have to live every day with the pain of discrimination.  But Reverend Cortez and his family are illustrations that the same force that drove the Coyles to their narrow-minded bigotry can also open the heart and bring people to a place of acceptance they never thought they'd see.

It brings me back to a quote I heard long ago.  I've never been able to find a source for it, but it still strikes me as one of the most powerful guides to behavior there is, and it can apply to anyone -- religious, atheist, or agnostic.  It goes like this:  "Always be more compassionate than you think you need to be, for everyone around you is fighting a terrible battle that you know nothing about."
Posted by Gordon Bonnet at 4:21 AM