So for today's Tempest in a Teapot, we have: Hillary Clinton's health.

A couple of days ago, Clinton collapsed at a 9/11 ceremony, and her doctor ascribed it to a combination of dehydration and pneumonia.  The internet has been buzzing lately regarding the "coughing fits" she's had at speeches, ascribing it to everything from pleurisy to lung cancer.  Because, of course, (1) it couldn't be that keeping a schedule that would kill most of us outright might have some health impacts, and (2) it's clear that she's the only prominent politician who has ever fallen ill.  The incident where President George H. W. Bush puked on Japanese Prime Minister Kiichi Miyazawa was just, um, a fluke.

So naturally, over at the r/conspiracy subreddit 19 of the 25 top stories are about Hillary Clinton's health.  Several claimed that she actually died of a stroke (or, in other versions, was hospitalized), and that subsequent appearances were actually a "body double."  More than one site has said that the Democratic National Convention is "scrambling to replace her" and is "in total panic mode." 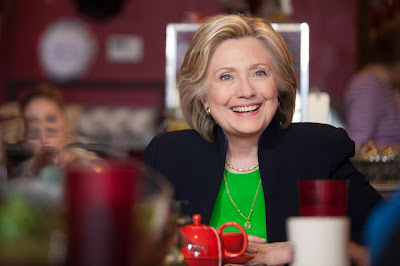 But no one is as far off the deep end as the YouTube user who goes by the handle "Styxhexenhammer666," which would be the odds-on favorite for winning first place in a "Most Self-Consciously Metal Pseudonym" contest.  "Styxhexenhammer" goes on at length about Clinton's health issues in a video entitled "The Cleveland Cough: Hillary Clinton has begun to Degrade in Health due to Our Magick" and which you all must watch.  Because it's just that wonderful.

What we find out from "Styxhexenhammer" is that he and "tens of thousands of others" have been putting spells of magick on Hillary Clinton.  (The "k" means that it's real, unlike the fake "magic" that people like David Copperfield do.)  And we find out that what "Styxhexenhammer" does is use music for his spells -- some of them are originals, but he can turn covers into magickal spells, too.  Like when he sings The Electric Light Orchestra's song "Evil Woman," it turns into a Spiritual Weapon of Great Force, not just a rehash of a cheesy 70s song that wasn't even that good when it was first released.

But apparently from all of the songs and other magick being launched Clinton's way, her health is in a serious tailspin.  I guess it's understandable, really.  After all, if someone sings "Copacabana" in my vicinity, I become physically ill.  It's hard to see what connection that has to the lyrics, however, unless you count the "punches flew and chairs smashed in two" part, just thinking about which could explain why I have a headache right now.

What strikes me about Styxhexenhammer's video, however, is how well-spoken and articulate he sounds, juxtaposed against what he's actually saying, which is seriously loony.  He goes into how you can shield yourself from such psychic attack, but very few know how to do so; and that a political campaign, being made of dozens or hundreds of power-hungry people, is even more vulnerable than "your typical sheep-like individual."

"It gives me great pleasure," he tells us, "that there are very many people who will never cast their vote for Hillary Clinton because of the actions of people like me."

Is it just me, or does this represent a nice blend of confirmation bias and megalomania?  "I've been singing hostile songs in Hillary Clinton's general direction, and now she's got a bad cough.  Yes -- that was me doing all of that."

Anyhow, the point of all of this is that people get sick.  Even presidential candidates get sick, sometimes.  This does not mean that they are dying (nor even that their aides think that they're dying), that they're so ill that they need a body double, nor most certainly that the whole thing is due to evil spells cast by someone who fancies himself a magickian (what would be the "practitioner of" form of this word?  If you pronounce "magickian" with a hard "k," which it certainly looks like you should, it sounds kind of silly).

So that's our dive in the deep end for today.  I'm hoping that no one takes this as incentive to sing at me.  Because it could be worse than "Copacabana."  It could be "The Piña Colada Song."  Or "Seasons in the Sun."  Or, heaven forfend, "Muskrat Love."

I don't even want to think about what the magickal outcome of those would be.
Posted by Gordon Bonnet at 2:14 AM