GMOs and the package-deal fallacy

One of the most frustrating of logical fallacies is the package-deal fallacy -- the tendency to lump together things that are similar (even superficially similar) and then paint them all with the same brush.  The fact that we here in the United States are in the middle of a particularly divisive presidential election makes it all too common.  How often do you see those stupid "internet memes" with captions saying things like "If you are a conservative, you believe ____" or "If you are a liberal, you think ____"?

The implication, of course, is that the universe is a simple and philosophically uniform place, a contention which you'd think that even a quick glance would prove wrong.  I know conservatives who are thoughtful, intelligent, well-spoken, and logical, and ones who are prone to fact-free, vitriolic rants.  I know liberals who fall into the same two designations.  I find it frightening that some people would like to have a word or two completely define a person -- and forthwith to cease thinking about the matter entirely.

Such thinking is hardly limited to politics, unfortunately.  Consider GMOs, which have been much maligned by the "pure foods movement" as being toxic, carcinogenic "frankenfoods" which are being foisted upon an unsuspecting public by evil corporations.  In this view of the world, Monsanto is being run by Satan himself, and any time you consume a genetically modified food item, you're running the risk of becoming ill from it. 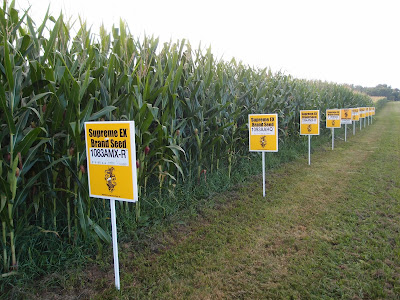 [image courtesy of photographer Lindsay Eyink and the Wikimedia Commons]

The problem is that like everything, genetic modification isn't simple, and claiming that all GMOs have the same (negative) effects isn't so much ignorant as it is flat-out wrong.  Not all genes do the same thing; why would we expect genetically modified organisms to have the same results, including their effects (if any) on human health?

Take, for example, the genetically modified eggplants now being grown in Bangladesh.  These eggplants have a gene that produces a protein making them resistant to being damaged by the fruit-and-shoot borer, a moth larva that causes widespread crop damage.  The protein has been tested to a fare-thee-well and shown to have no adverse health effects in humans.  Growing the GMO eggplants has drastically reduced the use of chemical pesticides -- which do have a lot of adverse effects, not only on humans but on wildlife.

Even the criticism that the GMO industry only exists to make millions of dollars at the expense of poor farmers doesn't apply here.  This GMO was developed using funding from the Bangladeshi government, and the seeds are being sold at low (controlled) prices, or given away for free.

Explain to me how this is a bad thing.

The difficulty is that in order to understand how GMOs differ from each other requires that you know some science.  To see that the situation with the eggplants, the one with RoundUp Ready crops (which have been used as excuses to increase the use of herbicides, and are implicated in herbicide resistance genes "jumping" to weed species), and the one with "Golden Rice" (a modified rice that is rich in vitamin A, but which is often tagged with a "kill switch gene" that makes the seeds unviable, thus preventing seed saving by poor farmers) are not the same thing means having to do some research and learn how genetics works.  And, in the case of Golden Rice, to consider a thorny ethical question about who has the right to profit from research.

Much easier, of course, just to say "GMO = evil" and be done with it.  The whole thing reminds me of a quote from John F. Kennedy: "Too often we enjoy the comfort of opinion without the discomfort of thought."
Posted by Gordon Bonnet at 3:57 AM