I read something today that made me really furious, and the worst part is that I don't even know who the target of my anger is.

The story that pissed me off so completely was a CNN article about a group of Russian hackers who "outed" gymnast Simone Biles, tennis player Venus Williams, and others for being on prescription medication.  Please note that the medications these athletes were on had been previously reported to the US Anti-Doping Agency, and the athletes granted exemptions.  There has been no allegation by the USADA, the United States Olympic Committee, or any of the oversight organizations governing the individual sports that there was any wrongdoing at all on the part of the athletes.

So what that means is, these people's private medical records have been made public, for no reason whatsoever.

Biles responded to the situation with the graciousness I would expect, having watched her being interviewed during the Rio Olympics.  "I have ADHD and have taken medication for it since I was a kid," she tweeted, shortly after the story broke.  "Please know I believe in clean sport, have always followed the rules, and will continue to do so as fair play is critical to sport and is very important to me."

The first thing that outraged me about this whole situation is that these hackers, whoever they are, thought it was appropriate to violate the privacy of athletes for... for what?  I don't know.  Increasingly, hackers such as these guys (who go under the handles "Fancy Bear" and "Tsar Team") and the more famous ultra-hacker Julian Assange are making records public simply because they can, and fuck the consequences.  On one hand, I understand the motivation; I recognize the damage that has been done by covert operations, by there being no transparency and no oversight of the government and the corporate world.  There is certainly a time for whistleblowers to bring to light documents that are being hidden for immoral and unethical reasons.

But that doesn't mean that every record should be made public.  There are government documents that are quite rightly classified as top secret.  On an personal level, there is information -- and that includes medical records -- that are nobody's business but the individual's.

So, I'm sorry, but all documents are not equal.  And no, you don't have the right, simply by virtue of your existence, to see everything and anything that has ever been written down.

But there's a subtler reason why this situation infuriates me, and that's the sly implication that because Simone Biles has ADHD, she should be ashamed of it or apologize for it.  It's an attitude you find toward people with all sorts of mental and emotional illnesses and disabilities -- that somehow, you're making it all up, that you really don't need your medications, that it's not the same thing as a "real" physical ailment.  It's what gave rise to the following, which has circulated widely on social media: 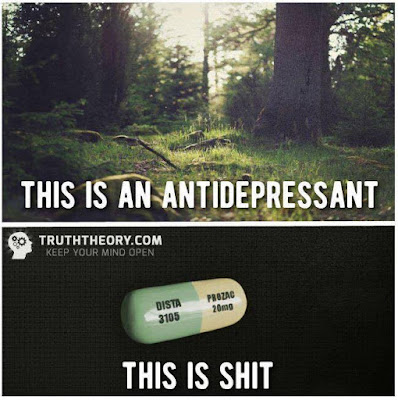 I will be open, here (and note: it is my choice to be public about this; if I did not want this known, it would be entirely my right not to have it known).  I have struggled with moderate to severe depression my entire adult life.  I have been suicidal more than once.  Through a combination of therapy, the support of my friends and family, and proper medication, I now have the ability to function without feeling like I'm constantly lost in a fog of despair.  The idea that someone, under the guise of "keeping your mind open" (note the subtitle on the above photograph) would imply that my medication is a cop-out, that I should throw it away and go for a walk in the woods, is not only ignorant, it is arrogant to the point of being insulting.

And my depression is not a point of shame for me.  It's not somehow my fault, nor is it under my control.  It is no more shameful to have a mental illness than it is to have multiple sclerosis or heart disease or cancer.  The fact that we still look at mental illnesses as qualitatively different from other conditions means that we still have a long way to go, societally, in how we think about human health.

So the fact that Simone Biles and other athletes are in the position of having their personal information made public (especially since all of the athletes in question had cleared their meds with the relevant regulatory boards) is appalling; even worse is the implication is that they need to defend themselves on points that need no defense.

The whole thing, in fact, is maddening -- that hackers are now throwing our private records around just because they can, and the ongoing problem of our society's attitude toward illness and medication in general, and mental illness in particular.  How to stop the first is more of a technological problem than anything else; changing the second is something that is incumbent upon all of us.
Posted by Gordon Bonnet at 2:02 AM