Robustness, data, and the EmDrive

I get asked rather frequently why I put such trust in the scientific process.  Often, that question is framed even more pointedly; doesn't my belief in the reliability of science amount to religious faith -- something that I believe simply because I believe it?

It's an interesting subject, and it will probably come as no real surprise to my readers to hear that I think the answer to the latter question is "no."  When science is working as it should (and it doesn't always; as a human pursuit, it's subject to human fallibility, like anything else), we amass evidence, craft theories to explain said evidence, rule out ideas that aren't supported -- and in so doing, we get closer and closer to a theory that is self-consistent and explains all of the data we currently have.  Scientists call such a theory "robust."

And once we're there, the idea that something could come along and shatter the whole thing falls into the category of "possible, but extremely unlikely."  People like to cite Einstein and relativity as having destroyed the Newtonian view of the world, but this isn't really so; Newtonian physics works perfectly well at the speeds and masses we usually experience.  It is only at velocities near light speed, or masses with a big enough gravitational pull to warp spacetime significantly more than the Earth (or even the Sun) does, that we see a big enough relativistic effect to measure.  So Einstein was more of a refinement of Newton than an invalidation.

The reason all of this comes up is because of the recent news about the EmDrive, a propellant-less propulsion system that its creators claim uses quantum and relativistic effects to generate thrust from a closed system.  The drive, which uses microwave or radio wave generation inside a shielded shell, allegedly has been measured to produce a "few ounces" of thrust, and a paper describing the physics behind it has allegedly passed peer review and will be published this fall. 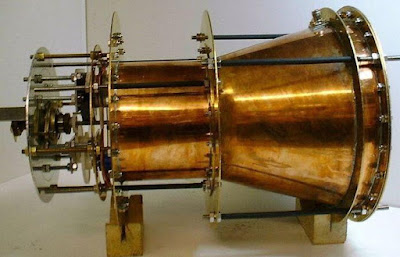 The problem is, the vast majority of the physicists -- i.e., the people who actually understand the intricacies of how the thing works, not to mention theories of propulsion, thermodynamics, quantum mechanics, and the rest -- are, in general, doubtful.  Physicist Sean Carroll, who writes passionately about the cutting-edge nature of modern physics research, and is up front about how much we don't know, was unequivocal:


There is no such thing as a ‘quantum vacuum virtual plasma,’ so that should be a tip-off right there.  There is a quantum vacuum, but it is nothing like a plasma.  In particular, it does not have a rest frame, so there is nothing to push against, so you can’t use it for propulsion.  The whole thing is just nonsense.  They claim to measure an incredibly tiny effect that could very easily be just noise.

Others have called the explanations given by EmDrive creator, engineer Roger Shawyer, as "Star Trek technobabble," or more simply, "bullshit."  (The latter from physicist John Carlos Baez of the University of California - Riverside.)  In order for a true exhaustless drive to work, it would have to overturn nearly everything we know about mechanics (quantum, Newtonian, relativistic, and otherwise).  In other words, it would point to a great big hole in our understanding of physics.

Once again: possible, but extremely unlikely.

Don't get me wrong -- no one would be more thrilled to have a potential interstellar drive system more than me.  If there was a spaceship that could get us to another star system in weeks or months (instead of tens of thousands of years) I would be elbowing people out of the way to get to the head of the line.  But the likelihood that the EmDrive is it seems slim to me, and the chance that what effect they've seen is simple experimental error or (as Carroll says) just noise nearly 100%.

Like any good skeptic, though, I'm perfectly willing to see the thing tested -- and I hope it does work. For one thing, if it did it would mean that there is a lot of physics out there that we don't understand, which is tremendously exciting.  For another, it would mean that we have a completely new way to power spacecraft, which is somewhere beyond tremendously exciting.  If the alleged peer-reviewed paper turns out to hold water, and tests of the thing -- data from which we should get in six months or so --  show that there is something to it, I will happily eat my words, publicly.  Look for a retraction right here in Skeptophilia -- should such an eventuality come to pass.
Posted by Gordon Bonnet at 2:30 AM