Slowing down the copy-and-paste

I'm really interested in research on aging, and I'd like to think that it's not solely because I'm Of A Certain Age myself.  The whole fact of our undergoing age-related system degradation is fascinating -- moreso when you realize that other vertebrates age at dramatically different rates.  Mice and rats age out after about a year and a half to two years; dogs (sadly) rarely make it past fifteen (much less in some breeds); and the Galapagos Tortoise can still be hale and hearty at two hundred years of age.

A lot of research has gone into why different organisms age at such different speeds, and (more importantly) how to control it.  The ultimate goal, selfish though it may sound, is extending the healthy human life span.  Imagine if we reached our healthy adult physiology at (say) age 25 or so, and then went into stasis with respect to aging for two hundred or three hundred years -- or more?

Heady stuff.  For me, the attraction is not so much avoiding death (although that's nice, too).  I was just chatting with a friend yesterday about the fact that one of my biggest fears is being dependent on others for my care.  The idea of my body and/or mind degrading to the point that I can no longer care for my own needs is profoundly terrifying to me.  And when you add to the normal age-related degradation the specter of diseases such as Alzheimer's and ALS -- well, all I can say is that I agree with my dad, who said that compared with that fate, "I'd rather get run over by a truck."

A particularly interesting piece of research in this field that was published last week in the Proceedings of the National Academy of Sciences gives us one more piece of the puzzle.  But to understand it, you have to know a little bit about a peculiarity of genetics first.

Several decades ago, a geneticist named Barbara McClintock was working with patterns of seed color inheritance in "Indian corn."  In this variety, one cob can bear seeds with dozens of different colors and patterns.  After much study, she concluded that her data could only be explained by there being "transposable elements" -- genetic sequences that were either clipped out and moved, or else copied and moved -- functions similar to the "cut-and-paste" and "copy-and-paste" commands on your computer.  McClintock wrote a paper about it...

... and was immediately ignored.  For one thing, she was a woman in science, and back when she was doing her research -- in the 1960s and 1970s -- that was sufficient reason to discount it.  Her colleagues derisively nicknamed her theory "jumping genes" and laughed it into oblivion.

Except that McClintock wouldn't let it go.  She was convinced she was right, and kept doggedly pursuing more data, data that would render her conclusion incontrovertible.  She found it -- and won the Nobel Prize in Physiology and Medicine in 1983, at the age of 81. 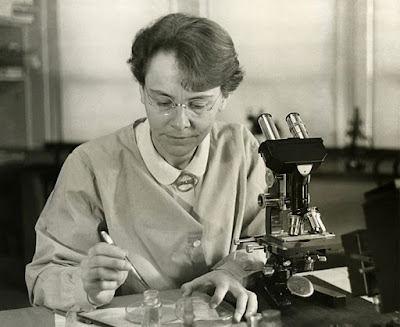 McClintock's "transposable elements" (now called "transposons") have been found in every vertebrate studied.  They are used to provide additional copies of essential genes, so that if one copy succumbs to a mutation, there's an additional working copy that can take over.  They are also used in gene switching.  Move a gene near an on-switch called a promoter, and it turns on; move it away, and it turns off.

The problem is, like any natural process, it can go awry.  The copy-and-paste function especially seems to have that tendency.  When it malfunctions, it can be like a runaway copy-and-paste would be in your word processing software.  Imagine the havoc that would ensue if you had an important document, and the computer was inserting one phrase over and over again in random points in the text.

This should give you an idea of why it's so important to keep this process under control.

You have a way of taking care of these "rogue transposons" (as they're called).  One such mechanism is methylation, which is a chemical means of tangling up and permanently shutting down genes.  But the research just released suggests that aging is (at least in part) due to rogue transposition getting ahead of methylation -- leaving random copied chunks of DNA scattered across the genome.

A study by Jason Wood et al. of Brown University has found that fruit flies near the end of their life have a far greater number of active transposons than young flies do.  In fact, as they age, the number increases exponentially, the result being interference with gene function and a system-wide degradation.  Most interesting is that they found two genes -- Su(var)3-9 and Dicer-2 -- that when enhanced both substantially increase longevity in fruit flies.  Su(var)3-9 seems to be involved in increasing the methylation rate of rogue transposons, and Dicer-2 in suppressing the transposition process itself.  An increase in the activity of these genes raised the average longevity of fruit flies from sixty to eighty days -- an increase of 33%.

Of course, there's no guarantee that even if these genes turn out to have similar effects in humans, that the longevity increase will scale up by the same amount (if it did, it would raise the average human age at death to around 100 years).  But the whole thing is tremendously interesting anyhow.  On the other hand, I have to say that the idea that we are getting to the point that we can tinker around with fundamental processes like aging is a little frightening.  It opens up practical and ethical issues we've never had to consider before; how this would affect human population growth, who would have access to such genetic modifications if they proved effective and safe, even such things as how we approach the idea of careers and retirement.

Imagine if you reached the age of sixty and could expect another thirty or more years of active health.  Imagine if the effect on humans was greater -- and the upper bound of human life span was increased to two hundred or three hundred years.  It seems like science fiction, but with the research that is currently happening, it's not outside of the realm of possibility.

If you had the physiology and mental acuity of a twenty-five year old, who would want to retire at sixty?  At the same point, who would want to stay in the same job for another hundred years?  I love my students, but that definitely falls into the "shoot me now" category.

The whole thing would require a drastic reorganization of our society, a far more pervasive set of changes than any scientific discovery has yet caused.  And lest you think that I'm exaggerating the likelihood of such an eventuality; remember how much progress has happened in biological science in the last century.  Only a hundred years ago, children in industrialized countries were still dying by the thousands of diphtheria and measles.  There were dozens of structures in cells, and a good many organs in humans, about whose function we knew essentially nothing.  We knew that DNA existed, but had no idea that it was the genetic material, much less how it worked.

Makes you wonder what our understanding will be in another hundred years, doesn't it?

And maybe some of the people reading this right now will be around to see it.
Posted by Gordon Bonnet at 1:52 AM