Tales from the flat Earth

Having steeped myself in All Things Woo-Woo for some years, you'd think I'd have it all figured out, at least with respect to why people believe weird things.  After all, the topic was the subject of one of my favorite reads, Michael Shermer's book entitled, oddly enough, Why People Believe Weird Things.  (And this book, in my opinion, should be required reading in every high school in America.)

But there's still a lot about the whole woo-woo belief system that mystifies me, and one of the things that baffles me most is why weird ideas come and go -- and then reappear.

I'm not talking about cases where the reappearance was caused by the money motive, as with all of the unreality shows now springing up like fungus after a rainstorm on networks like the This Used To Be About History But Isn't Anymore channel.  Programs with titles like Monster Quest, UFO Hunters, Ghost Adventures, Paranormal Witness, and Real Bigfoots of New Jersey.

Okay, I made the last one up.  But it's not really that much weirder than the actual ones that are out there.  And the plots are all the same; some people go out looking for whatever they're hunting, don't find it, and then high-five each other at the end as if their quest had been a raving success.

So it's no surprise that these shows resurrect interest in the paranormal.  But what is more perplexing to me is why all of a sudden woo-woo ideas from the past will catch hold and rise, zombie-like, from the grave, without there being any apparent monetary incentive involved.

In particular, I'm thinking of the Flat Earth Theory, which is only a "theory" in the sense of being "an idea that someone came up with."  Myself, I'd thought that the whole idea of the flat Earth had gone out of vogue somewhere back in the 15th century (and to be completely accurate, the fact that the Earth is a sphere had been proven without a shadow of a doubt way back in 240 B.C.E. by a Greek scientist named Eratosthenes).

I use the shadow metaphor deliberately, because what Eratosthenes did was to measure the difference in the angle of a shadow cast by a rod in Syene, Egypt, and compared it to the angle of the shadow of the same rod in Alexandria on the same day of the year -- and from the comparison, and using a little bit of trigonometry and solid geometry, came damn close to getting the circumference of the Earth right.

So you'd think that 2,200 years ago, the Flat Earthers would pretty much have said, "Oh.  Okay.  We were wrong."  But no.  They're back, and they're back with a vengeance.  As little as ten years ago, Flat Earthers were kind of a fringe group, and the Flat Earth Society was populated by a membership that seemed to be half True Believers and half people who joined it to have a good laugh.  But now, there is an increasing number of Flat Earthers out there, and they are not amused by us scoffers.

They're mad as hell, and they're not gonna take it any more.

And, according to an article in The Atlantic, they are coming up with additional wacky ideas to add to their view of the world, based upon the premise that if you believe one idiotic idea, appending other idiotic ideas onto it makes it more sensible.  According to Sam Kriss, who wrote the article, not only do they believe that NASA is leading a coverup of all of the evidence for Earth being shaped like a platter (and, therefore, all of the astronomers are too, because apparently NASA uses a substantial part of its ever-shrinking budget to pay off the scientists and keep them from spilling the beans), but the geologists are in on it, too.

Why would the geologists care, you might ask?  Well, according to a small but vocal subset of Flat Earthers, another thing that is fake about the scientific view of the world is... forests.  Because the forests we have now aren't real forests, at least not in the sense that they're like they were back eons ago.  Thousands of years ago, before humans were the common species they are now, there were actual honest-to-goodness forests made of actual honest-to-goodness trees...

... that had heights measured in miles.

What is the evidence for all of this?  Well, some of the stuff that geologists hoodwink the populace into thinking are "eroded volcanic cores," like the Devil's Tower in Wyoming, are actually the stumps of these humongous trees. 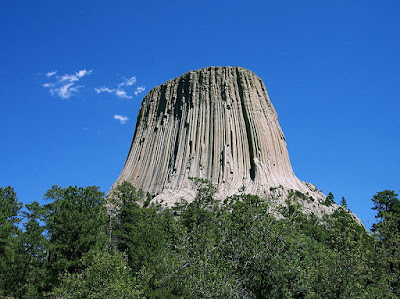 [image courtesy of photographer Colin Faulkingham and the Wikimedia Commons]

So anyhow.  I know that this is a nonsensical idea, but what puzzles me is why it's caught on so strongly just in the last year or so.  Social media has been buzzing with stridently vocal Flat Earthers who believe stuff like the aforementioned horseshit about MegaTrees, and who consider skeptics like me either deluded sheeple or else NASA shills.  (Which reminds me, NASA: where the hell is my shill check?  I'm waiting.)

I'm hoping that this is just a phase, and that this will fizzle out the same way that Ouija boards did a couple of years ago when there was a sudden flurry of people wanting to communicate with the Spirit World.  But this one is kind of annoying, because the Flat Earthers don't just quietly do their thing -- these people are cantankerous.  They gum up websites like the r/skeptic subreddit with their nonsense, engaging with people who just can't stand to ignore them.

So I'm counting on this being an example of what C. S. Lewis was talking about when he said, "Fashions come and go, but mostly they go."  And in my opinion, this one can't go soon enough.
Posted by Gordon Bonnet at 2:16 AM