The index case for fact-resistance

I think a standard question for anyone who holds an anti-science stance -- so climate change deniers, antivaxxers, people who are pro-homeopathy -- should be: "What would it take to convince you that you are wrong?"

I'll be up front that this idea is not original to me.  It was the single question that still stands out in my mind as the most important in the infamous Bill Nye/Ken Ham debate.  Nye responded, in essence, that one piece of information that could not be explained except by the young-Earth model is all it would take.  Ham, on the other hand, said that nothing could convince him.  No evidence, no logical argument, nada.

And therein, folks, lies the difference between the scientific and anti-scientific view of the world.

It is a question I wish had come up during a hearing this week in the House Committee on Science (controlled, as I have mentioned before, almost entirely by anti-science types).  The topic was the subpoenas being sent out to climate scientists in an attempt to intimidate them into backing down on their (at this point incontrovertible) claim that the world is warming up.  One of the people who spoke in favor of the subpoenas was Ronald Rotunda, professor of law at Chapman University.

This in itself is an odd choice.  Rotunda is a lawyer, not a scientist.  Wouldn't you want the scientists -- i.e., the people who know what the hell they're talking about -- to weigh in?  Of course, it doesn't take a genius to see that wasn't the point here.  The point was getting some talking heads to reinforce the view of the committee that climate change is a hoax.  But what happened afterwards is pretty interesting -- and heartening.

Rotunda was trying to make the case that the scientists disagree on the idea of climate change and (specifically) sea level rise, and cited research by Harvard geoscientist Jerry Mitrovica, claiming that it showed that the melting of the Greenland ice cap would actually cause the sea level to fall.  Of course, Rotunda was completely misrepresenting Mitrovica's work; Mitrovica had shown that due to a combination of gravitational effects and isostatic rebound (the lifting of land masses when a weight such as an ice cap is taken from them), the sea level around Greenland as measured from the coast of Greenland might fall.  What Rotunda conveniently forgot to mention was that the melted ice combined with the aforementioned factors would cause the sea level to rise more elsewhere.

That's not what the representatives on the committee wanted to hear, of course, so it never came up. 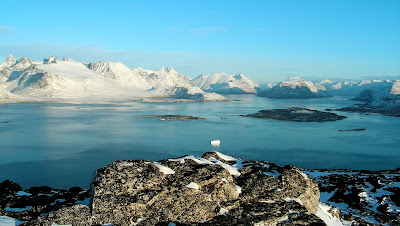 What's encouraging in all of this depressing business is the response of one person on the committee -- Bill Foster of Illinois, the committee's only trained scientist (he started his career as a physicist).  Foster listened politely to what Rotunda was saying.

But he wasn't buying it.

What Foster did was brilliant -- he merely asked Rotunda to explain how his claim worked.  "I was fascinated by what seemed to be apparent support of an argument that the Greenland ice sheet would melt, and thereby lower the sea level," Foster said, "and I was wondering if you can expound on how exactly the physics of this works."

Rotunda, who apparently has less understanding of physics than your typical 12th grade physics student, immediately began to babble.  "When the ice sheet melts, all the gravity that was then part of the island of New Greenland [sic] disappears into the ocean, it just goes away.  And that ice has been pushing Greenland down, and now Greenland will be moving up, because the water is all over the place."

All I can say is that if I gave explanations like that in my high school classes, I would quite rightly be tarred and feathered.

So that's the next best thing to "What would it take to change your mind?" -- "Can you explain to me how that would work?"  Both of these, in my opinion, should be the immediate go-to questions in any debate on climate change -- or any other discussion that has become contaminated with anti-science.

Of course, the downside of all of this is that the climate change deniers on the Science Committee, with the exception of Bill Foster, all just nodded sagely while Rotunda spewed his bullshit.  If you already have assumed your conclusion, no amount of logic or evidence would ever sway you.

It reminds me of a brilliant satirical piece written by Andy Borowitz for New Yorker earlier this year entitled, "Scientists: Earth Endangered By New Strain of Fact-Resistant Humans."  A quote from Borowitz seems an appropriate way to end this post, especially given that the House Committee on Science -- of all groups -- seems to be the index case for fact-resistance:

While scientists have no clear understanding of the mechanisms that prevent the fact-resistant humans from absorbing data, they theorize that the strain may have developed the ability to intercept and discard information en route from the auditory nerve to the brain.  “The normal functions of human consciousness have been completely nullified,” Logsdon said.