A couple of days ago, I saw the following screed posted:


Do you think that Obama is intentionally trying to destroy America?  Anyone who doesn't see it or believe it is either blind, or prejudiced because of a like nationality...it's such a shame that our first African American president has done so much destruction to our nation!...  Pray very hard that Trump wins because for all his faults he truly loves his country and we WILL NOT survive Hillary Clinton.

I try like hell to avoid politics here on Skeptophilia, partly because I'm not knowledgeable enough to comment on most political topics, partly because I see most issues of governance as so hopelessly complicated that it's unclear that there even is a solution, and partly because most folks enter any political discussion so completely opinionated that it's hard to see how anything I could say would change anyone's mind on anything. 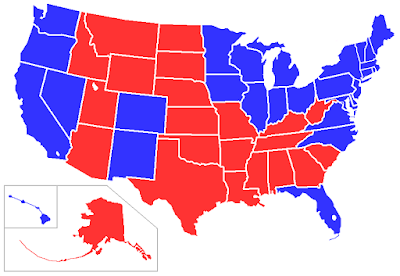 But this statement was so extreme that it was tempting to post a response, a temptation I successfully resisted.  The comment rankled, though, and ultimately I felt like I had to respond in some way, so here we are with today's topic.

What I find most bizarre about the statement itself is that if you look around you, America is pretty much loping along as it always has, miraculously undestroyed after eight years of Obama's leadership.  And if you dig a little deeper -- by which I mean not simply shrieking an opinion but examining the facts -- you find something even odder.

The Balance, a non-partisan economic and financial media source, just posted an article yesterday that the U.S. economy is pretty healthy -- in fact, the article's author, Kimberly Amadeo, said it's "very nearly a Goldilocks economy."  In the past few years the GDP has grown at an ideal annual rate of between 1.8 and 2.5 percent.  U.S. manufacturing has grown even faster -- up 2.6% this year, and forecast to remain around that rate for the next four years.

What about the deficit?  Since President Obama took office, the deficit has dropped by 2/3, from $1.4 trillion to $489 billion.  (Now, I agree that $489 billion is still a pretty huge number, but at least it's moving the right direction.)

Likewise, the unemployment rate has shown a steady drop, from a high of 10% in October 2009 to 4.8% today.  Even the crime rate -- one of Trump's major issues -- has dropped steadily, and in fact has been on the decline since a peak way back in 1994.  (The same holds true even if you just look at the rate of violent crimes involving guns; so despite the hype in the media, you're actually less likely to be killed by a gun now than you were twenty years ago.)

What about those illegal immigrants "pouring across our borders?"  According to a study by the non-partisan Pew Research Group, the rate of illegal immigration has been stable for years, and in fact was considerably higher in 2007 than it is now.  (You might argue that it's still too high -- but the fact is, it's actually lower today than it was during George W. Bush's presidency.)

Even the common claim that "Obama is comin' for your guns" has turned out to be horseshit.  Look around you.  We're still as heavily armed as ever.

About the only statistics I could track down where Obama's track record kind of sucks is the male/female wage gap (which has barely moved in the past twenty years), the racial wage gap (just a couple of days ago a study by the Economic Policy Institute announced that it's the highest it's been in forty years), and the wealth gap between the richest and poorest (which is going the wrong way -- up -- and has been for thirty years).

So okay, you think that Obama is destroying the nation.  Maybe even deliberately.  Can you show me one metric -- just one -- that shows that that's true?

I mean, I get it if you don't like his policies on pro-choice/pro-life, LGBT issues, and so on.  Those tend to be divisive and engender high emotion.  But if you're trying to tell me that the United States has gone to wrack and ruin in the past eight years, can you show me why?

The whole thing is reminiscent of the interview with Newt Gingrich in which he said that people feel increasingly unsafe from violent crime.  The interviewer said, "Violent crime across the country is down."  Gingrich responded, "The average American... does not think crime is down, does not think they are safer."  The interviewer -- who at this point seemed to be trying to stop herself from laughing in his face -- said, "But we are safer, and it is down."  Gingrich said, "That's your view."

Gingrich interrupted with a patronizing smile and said, "What I said is also a fact."

And this seems to me to be the heart of the problem.  We are at the point that your "feeling" that we're spiraling into chaos trumps my facts that we're not.  Or -- scarily -- that if you're feeling something strongly enough, it becomes a fact.  The world, then, is constrained to fitting into whatever your particular narrative says it is.

Which is all very well until people start voting on the basis of ignoring facts and relying on feelings -- because that is a strategy that can lead to disaster.
Posted by Gordon Bonnet at 2:08 AM