Prompted by yesterday's post regarding the tendency of some people to amplify their feelings into facts (and in the process, ignore the actual facts), a loyal reader of Skeptophilia put me on the trail of a fine, if disturbing, example of this phenomenon: the claim that there were Irish slaves, and they had it worse than the African ones did.

I had seen a version of the claim before, posted on Facebook.  This is the one I ran into: 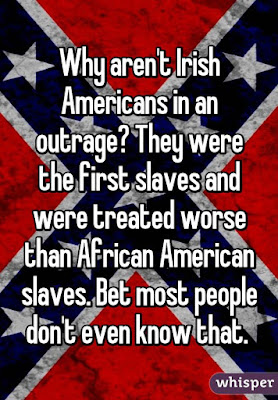 My impression was that it was just one more in the long line of claims intended to make white people feel like they have no reason to address the sordid history of North America with respect to their treatment of minorities and indigenous peoples.  "Hey, y'all," it seems to say, "we had it bad too, you know."

What I didn't realize until today was that there's a far uglier implication here, made plain in some of the websites where you see the above posted; that not only were the Irish oppressed (a point no one with any knowledge of history would argue), but that Irish immigrants to North America were oppressed by the African Americans.  If you look at those websites -- which I would not recommend to anyone who has a weak stomach or slim tolerance for racist garbage -- you find claims that Africans and Mulattos enslaved, raped, tortured, and killed Irish slaves, especially Irish women, all through the 18th and first half of the 19th century.

The claim is thoroughly debunked by history scholar Liam Hogan, who addresses each piece of the claim, uncovering the bogus nature of the supporting evidence.  Some of the "evidence" is outright falsification; for example, one website uses gruesome photos from Andersonville Prison and the Holocaust and claims that they were pictures of Irish slaves; another shows a drawing of 18th century psychopathic murderer Elizabeth Brownrigg flogging a servant, and claims instead that it is a drawing of a poor Irish slave in the early United States being whipped.  In fact, the claim that the Irish were enslaved at all is mixing up indentured servitude with chattel slavery, a distinction that none of the slave owners back then were confused about in the least.

All of this would be another exercise in believe-what-you-want-to-believe if the whole idea hadn't been taken up by the white supremacists and neo-Nazis.  The "Irish slave" trope figures into the whole mythology you see on websites like Stormfront, revolving around the idea that the whites are in constant danger of being attacked and destroyed by people of color.  And as strategies for convincing followers go, it's pretty powerful.  If you can persuade yourself that white privilege is nonexistent, that the whites all along have had it as bad as the minorities, it is only a short step to the attitude that any demands made by minorities that the whites address institutional racism are ill-founded and unfair.

The Trump campaign chair in Ohio, Kathy Miller (who has since resigned), went even further, blaming President Obama for racism, and claiming that it didn't exist before he became president:


If you’re black and you haven’t been successful in the last fifty years, it’s your own fault. You’ve had every opportunity, it was given to you. You’ve had the same schools everybody else went to. You had benefits to go to college that white kids didn’t have. You had all the advantages and didn’t take advantage of it.  It’s not our fault, certainly... Growing up as a kid, there was no racism, believe me.  We were just all kids going to school.

I don’t think there was any racism until Obama got elected.  We never had problems like this...  Now, with the people with the guns, and shooting up neighborhoods, and not being responsible citizens, that’s a big change, and I think that’s the philosophy that Obama has perpetuated on America.

Well, of course you didn't experience racism, you nitwit.  You're not a minority.  As for the rest of it, this surpasses willful ignorance.  I'm not even sure what you'd call it.  Especially since the interviewer said to Miller that some people would take exception to what she'd said, and she responded, "I don't care.  It's the truth."

So here's a particularly awful example of what I was talking about yesterday; people elevating their own feelings, biases, and prejudices to the level of facts.  Taking the fact that for a white person, talking about racism can be uncomfortable, and using that discomfort as an excuse for believing that racism itself doesn't exist.

Well, I'm sorry, but the world doesn't work that way.  The truth doesn't change because thinking about it makes you feel wonky.  And neither can you substitute your mythology for actual history as a way of whitewashing the role your ancestors (and mine) had in oppressing other cultures.  All that does is perpetuate the very attitudes that created the problem in the first place -- and makes it less likely that our children and our children's children will live in a world where everyone is treated fairly and equitably.
Posted by Gordon Bonnet at 4:13 AM