Winner by a nose

A lot of Trump supporters are frustrated that Their Boy didn't do so well in the debate Monday night.  I mean, it would take a serious pro-Donaldite to feel like his performance was anything but a blustering, sometimes baffling word salad.  It's unsurprising considering his penchant for extemporizing -- a strategy that may play well when you're at a rally composed of your loyal followers, but doesn't exactly work on the national stage while being watched by (allegedly) more people than tuned in to the last Superbowl.

But the problem is, when someone you're counting on doesn't come through, you start casting around for an explanation.  Because obviously it couldn't be your candidate's fault, right?

So first, we had Donald himself blaming his poor showing on a faulty microphone.  How that could have an effect I don't know, given that we could hear him just fine.  Maybe he thought that the mic was magically turning his eloquent words into incoherent babbling like his comments on cybersecurity:


I have a son.  He's 10 years old.  He has computers.  He is so good with these computers, it's unbelievable.  The security aspect of cyber is very, very tough.  And maybe it's hardly doable.  But I will say, we are not doing the job we should be doing.  But that's true throughout our whole governmental society.  We have so many things that we have to do better, Lester, and certainly cyber is one of them.

But Trump wasn't the only one to claim that there was fishy stuff going on.  There's a conspiracy theory making the rounds that the moderator, Lester Holt, was deliberately throwing the debate for Hillary Clinton.  And not only that; Clinton herself was signaling him by giving him threatening coded hand gestures by scratching her nose.

I'm not making this up.  According to the video, Clinton scratched her nose six times.  She apparently did this to let Holt know if he was asking questions to Trump that were too easy or ones to her that were too hard, to coerce him into sidestepping awkward topics, and allowing Clinton to (and I quote) "interrupt and score with a zinger."

Never mind that according to a PBS staff writer, Trump interrupted Clinton 51 times in two hours.  Never mind that Trump himself was sniffing constantly during the entire debate, and no one's claiming that he was secretly signaling someone, possibly his coke dealer. 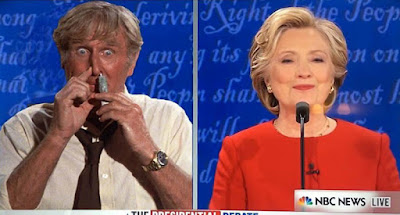 I mean, seriously, folks.  If you don't like Hillary Clinton's politics, that's absolutely fine by me.  But the idea that she was communicating with Holt in code so he could skew the debate in her favor is...

For one thing, Lester Holt is a registered Republican.  Why on earth a registered Republican (who has been a respected figure in journalism since the early 1980s) would throw a debate in favor of a  Democrat is beyond me.  I have a feeling it's beyond the people making the claim, too.  After all, these sorts of things aren't about rationalism and logic, they're about the world conforming to their own personal view of things.

Damn the evidence, full speed ahead.

But even so, I've seen this claim surface on social media more than once in the past couple of days, and mostly the comments have been on the order of "I knew it would be rigged" and a knowing nod.  And this strikes me as a dangerous trend.  It's the approach of the toddler, you know?  If you don't get your way, if your every wish isn't immediately met, it's the whole world's fault.  It couldn't be that you're interpreting things wrong, or (heaven forfend) you might not understand what's going on.

All the more reason for me to stay right the hell out of politics.  I'm always reminded of the quote by Dave Barry: "When trouble arises and things look bad, there is always one individual who perceives a solution and is willing to take command.  Very often, that person is crazy."

The problem is, in order to get elected, the crazy person also has to have followers.  And they're often even crazier.
Posted by Gordon Bonnet at 2:02 AM