Is it too much to ask that people leave their bizarre mythology out of politics?

I mean, our political situation at the moment is surreal enough.  We don't need anything to make it more embarrassing to the world at large.

Which is a message that needs delivering to televangelist Jim Bakker.  Bakker hosted an interview with Robert Maginnis, of the Family Research Council, a far-right evangelical organization that was classified as a hate group by the Southern Poverty Law Center in 2010 because of their stance on LGBT issues.  In the interview, Bakker opined that President Obama was showing his preference for Muslims by appointing Abid Qureshi to the U.S. District Court in Washington, D.C. (in Bakker's mind, "one out of hundreds of federal appointments" apparently constitutes a "preference"), when Maginnis made an even wackier pronouncement -- that our federal government is being controlled by witches:


I know that there’s demonic forces in that city.  I have personally met people that refer to themselves as witches, people that say they advise the senior leadership of the country.  We invite within the federal government people to advise us, and often some of those advisers, I think, have evil motivations, things that you and I would not approve of.

Honestly, I doubt the current trend of micromanagement in our federal government has anything to do with witches.  The whole modern Wicca religion has as its principal motto "As long as it harms none, do what you will," which is about as opposite to the government's approach as any I can think of.

But a statement being ridiculous never seems to deter these people.  Because whether it was spurred by Maginnis's remark about witches or not, last week a bunch of evangelicals at the Midwest Vision and Values Pastors Leadership Conference in Cleveland decided to protect Donald Trump from demonic attack by laying hands on him. 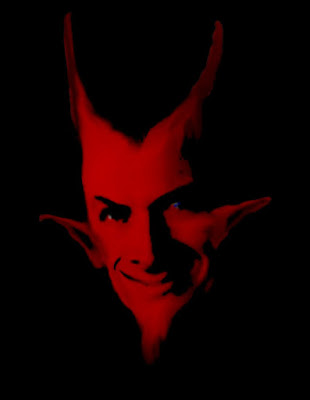 Darrell Scott, pastor of New Spirit Revival Center, who hosted the conference, told the audience that a "nationally known minister told Donald Trump that if you choose to run for president, there’s going to be a concentrated Satanic attack against you...  He said there’s going to be a demon, principalities and powers, that are going to war against you on a level that you’ve never seen before and I’m watching it every day."

So to ward off this nasty demonic stuff, Scott’s wife led some of the attendees in a "laying on of hands."

"God we ask you right now that Your choice is this choice," she said.  "God, I ask that you would touch this man, Donald J. Trump.  Give him the anointing to lead this nation."

I have to admit that I find it baffling that the evangelical wing of Christianity has flocked to Donald Trump the way they have.  Aren't adultery and divorce, not to mention hoarding money and refusing to pay people who work for you and admitting in a televised debate that you don't pay your federal taxes, considered sins?  Okay, I get that the right wing Christians would disapprove of Hillary Clinton's stance on gay marriage and pro-choice.  But Trump as a person seems pretty antithetical to everything Jesus preached, including "render unto Caesar that which is Caesar's".

Okay, I'm an atheist, so what do I know?  But still, even from my perspective outside of the system, it strikes me as bizarre.

No more bizarre, of course, than claiming that the government is being run by witches.  So I guess whatever else you can say, you have to admire their consistency.  Even if what it means in this case is "consistently batshit."
Posted by Gordon Bonnet at 2:18 AM