Bee all, end all

That a lot of people would prefer it if the world was simple is hardly an earthshattering claim.  You see it all over, especially in political debates -- the single-cause fallacy, attributing complex phenomena to one ultimate origin.  The mess in the Middle East?  George W. Bush, of course.  The loss of jobs to outsourcing?  Thanks, Obama.  Yesterday's unusually hot afternoon?  Has to be climate change.

I suppose it's understandable enough.  Figuring out complicated cause-and-effect relationships is hard work.  Sometimes even with lots of data, the answers are unclear.  We humans don't tend to like uncertainty, especially when we hear that the experts themselves are uncertain.  Much easier to fall back on the simple explanation and stop thinking about it.

Which, I think, explains the reactions I saw to the Washington Post article entitled "Bees Were Just Added to the U.S. Endangered Species List for the First Time."  Most of the comments I saw fell into one of the following categories:
Never mind that when you actually read the article, it turns out that the additions to the ESL were seven rare species of endemic yellow-faced bees native to Hawaii, and the probable reason for their decline is habitat loss and destruction of native wildflowers, not pesticides or the rest of it.  There are actually an estimated 20,000 species of bees worldwide, so assuming that all bees are going extinct because seven uncommon island endemics are endangered is a little like using the near-extinction of the California condor to conclude that pigeons and starlings are about to go the way of the dinosaurs.  (Actually, it's worse; according to the most recent tallies, there are a few more than 10,000 species of birds in the world, so there's actually twice the biodiversity in bee species than in bird species.) 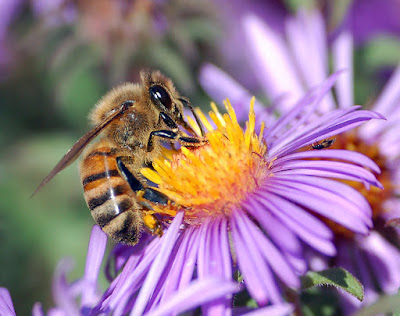 That's not to say that there haven't been problems with declining numbers of more common bee species recently, but as I alluded to in the first paragraphs, it's not as simple as it sounds.  The still-unexplained colony collapse disorder has reduced the populations of western honeybees, the most common bee species in North America -- particularly among captive hives.  But the truth of the matter is, CCD seems to be declining itself, and honeybee numbers are on the rise in most places.

As far as wild bee species, the situation is even less clear.  A study by Insu Koh et al. last year suggested that in some places, wild bee populations had declined by 23%, but if you look at the study itself, you find that there is a huge amount of uncertainty in the data, mostly due to the difficulty of estimating bee populations in the wild.  The numbers Koh et al. used were developed from spatial-habitat models, using subjective information such as the "quality of nesting sites," and generated numbers that sounded alarming.  A review of the study in Science 2.0 was scathing:


How did they count wild bees when no one else has been able to do so? They didn't, which means it adds to the list of PNAS papers that can't possibly have been peer-reviewed.  The team instead identified forty-five land-use types from two federal land databases and asked fourteen hand-picked experts about each type of land and how suitable it was for providing wild bees with nesting and food resources.  They then averaged the experts' input and levels of certainty (no, really) and built a computer model that they think predicts the relative abundance of wild bees for every area of the contiguous United States, based on their quality for nesting and feeding from flowers.  Lastly, they validated their model against bee collections and field observations they also hand-picked.

In other words, they created an academic model that would get them fired from every single company in existence for being wildly suspect and based on too many assumptions.

The authors then claim the decline they don't know is happening must be due to pesticides, global warming and farmers.

In fact, a study (this one peer-reviewed) in Nature last year suggested that populations of the dominant (and therefore most agriculturally relevant) species of wild bees are actually doing okay:


Across crops, years and biogeographical regions, crop-visiting wild bee communities are dominated by a small number of common species, and threatened species are rarely observed on crops. Dominant crop pollinators persist under agricultural expansion and many are easily enhanced by simple conservation measures, suggesting that cost-effective management strategies to promote crop pollination should target a different set of species than management strategies to promote threatened bees.

So the bottom line is: colony collapse disorder still exists, but seems to be declining in frequency, and we're still not entirely sure what causes it (neonicotinoid pesticides are one possibility, but there are others).  The western honeybee, the most common and important pollinator species in North America, is actually increasing in numbers.  There are a few species (out of the 20,000) of bees that are threatened or endangered, some because of human activities, but the same is true for any taxon you pick.

In short: the situation is complicated, whether you like it or not.  It'd be convenient to have a clearly-outlined problem with a certain culprit and an obvious solution, but the world seldom works that way.  And as far as "Beemageddon" goes; there are a lot of other ways we could self-destruct that are far more likely than the loss of honeybees.

Maybe it's not justified to be an optimist, but at least be a pessimist about the right things.
Posted by Gordon Bonnet at 2:21 AM