A couple of days ago, we had the conspiracy theory on the part of the pro-Trump side of things that moderator Lester Holt had thrown the debate in favor of Clinton because she was giving him threatening coded hand gestures.  So because the watchword around here is fairness, today we're going to look at another conspiracy theory, this one dreamed up by members of the pro-Clinton faction:

Andy Kaufman, as most people my age know, was the disturbingly odd comedian who played the vaguely Eastern European Latka Gravas on the sitcom Taxi, and then went on to have a bizarre career doing standup comedy.  His comedy shtick frequently involved wrestling women, Elvis Presley impressions, and (occasionally, if the audience wasn't sufficiently appreciative) reading to them from The Great Gatsby until they gave up and left.

Kaufman's routines were so weird, and he was so secretive about his own personal life, that many people began to wonder if the line between his acting and his actual personality was becoming blurred -- that maybe it wasn't an act, that the man was mentally ill.  He did nothing whatsoever to discourage this perception, and in fact it was the subject of the 1999 biopic Man on the Moon (starring Jim Carrey as Kaufman).  But because of his penchant for dubiously tasteful pranks, when he died in 1984 at the age of 35 of a rare form of lung cancer, not a few of his fans wondered if he'd faked his own death -- and in fact, there are still people who believe that Kaufman is alive and in hiding under an assumed identity.

Which is strange enough.  But just last week Zach Schonfeld did a piece over at Newsweek that apparently there are people who take this idea one step further -- that not only did Andy Kaufman survive, but he survived as Donald Trump. 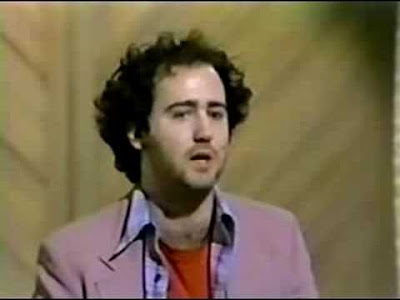 Andy Kaufman shortly before his death.  Yes, I know he looks absolutely nothing like Donald Trump.  [image courtesy of the Wikimedia Commons]

Never mind that Trump himself is older than Kaufman; Trump was born in 1946, Kaufman in 1949.  So Trump was out there doing stuff while Kaufman was still alive and performing.  Easy, say the conspiracy theorists; either the real Trump died shortly before Kaufman's faked death, or... maybe... Kaufman killed him and took his place.

The sole evidence, if I can dignify it by that name, that is trotted out to support this nutty idea is that people point out the similarity between Trump's bombastic, blustering style and the persona of one of Kaufman's characters, lounge singer Tony Clifton, who would shout abuse at audience members in a New York-accented voice that Schonfeld says "resembled a coked-up Bugs Bunny's."  One of the proponents of this theory -- a science writer named Erik Vance -- says that the similarity is so striking they must be the same person.

"All you gotta do is watch one Tony Clifton video and you realize, this is Trump!" Vance told Schonfeld.  "He’s saying these audacious horrible things that he’s not serious about, but he doesn’t care!  It’s just one big joke for him.  And it’s brilliant.  You watch Donald Trump and you can’t help but think, ‘No one can think this stuff!’  I imagine Trump going home at night and putting on a beret and listening to Rachmaninoff and discussing postmodern theory."

I kept thinking that Vance would, somewhere in the story, say, "Ha ha!  Not really!  Of course I don't think Kaufman and Trump are the same person!  They don't even look alike!"  But Vance seems... really serious.  When he created a blog to give his theory more visibility, he was swamped with positive feedback, despite the fact that he said stuff like this:

I believe that Kaufman created his Donald Trump character sometime around 1972, as a precursor to his equally jarring Vegas lounge singer, Tony Clifton.  As the comedian gained fame and money, he worked doggedly to build a backstory for Trump, making him the son of a New York real estate agent, a graduate of the Wharton School, and giving him a stint in military school.

As both Kaufman and his Trump character became more successful, the comedian had to increasingly rely on his brother Michael and collaborator Bob Zmuda to take turns playing Trump.  In 1983, exhausted and frustrated that he couldn’t dedicate more time to the Trump project, he made a decision.  He would fake his death, undergo reconstructive surgery, bleach his hair into an elaborate comb-over, and become Trump full time.

What this illustrates -- besides the fact that people believe some seriously wacky shit, a point that hardly needed emphasis, especially for regular readers of Skeptophilia -- is that engaging in nutty conspiracy theories is not confined to people of one political stripe.  It's easy to conclude that of course we are seeing everything clearly, it's the other side that subscribes to goofy notions about how the world works.  They believe in conspiracy theories; we are perceiving reality.

What's becoming apparent is that the lunatic fringe on both sides is prone to bizarre counterfactual thinking.  So once again, if behooves us to recall Kathryn Schulz's dictum of being able to look at our own beliefs and say, "I don't know, maybe I'm wrong."

Of course, the likely truth is that Hillary Clinton was not engaging in threatening nose-scratching to intimidate Lester Holt, Donald Trump is (for better or for worse) Donald Trump, and Andy Kaufman died at the young age of 35 way back in 1984.  I know that Ockham's Razor is just a rule of thumb, and sometimes the world does turn out to be weird and convoluted; but in this case, I strongly suspect that the simplest explanation is actually the truth -- regardless of what people on either side of the aisle would like to believe.
Posted by Gordon Bonnet at 2:20 AM