In C. S. Lewis's wonderful fantasy story The Magician's Nephew, he says, "The trouble about making yourself stupider than you really are is you very often succeed."  In the story, Uncle Andrew (the magician of the title) has convinced himself so completely that what he is seeing isn't real that in the end, he actually becomes unable to see it.

It's not so far off from what happens with conspiracy theorists.  When you have accustomed yourself to accepting an idea even if it has no evidence to support it -- or, in some cases, because it has no evidence to support it -- you're likely to fall for any damn fool claim that comes along.  And, if you'll allow me another quote, this one from Voltaire: "Those who can make you believe absurdities can make you commit atrocities."

We got an object lesson in these two principles last week when two men from Georgia, Michael Mancil and James Dryden, were arrested for plotting to go to Alaska with piles of weapons, with the intent of blowing up HAARP.  You probably know that HAARP -- the High-frequency Active Auroral Research Project -- has been blamed for everything from creating hurricanes to triggering earthquakes, when in reality all it does is study the ionosphere for the purposes of improving communication and navigation systems.  To be sure, it looks kind of creepy; a field of antennae sprouting up from the Alaskan tundra. 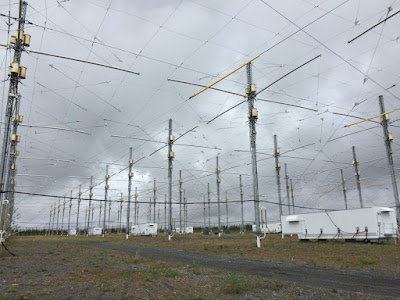 So the conspiracy theorists just love HAARP, and their fears were not assuaged a bit when the U. S. Air Force, which ran HAARP, basically turned it over last year to the University of Alaska - Fairbanks.  You'd think that people would say, "Okay, if HAARP really could be used as an ultra-powerful weather modification device, capable of spawning tornadoes on the other side of the planet, the Air Force would definitely not release their interest in it."

But that is not how the minds of conspiracy theorists work.  Of course HAARP is still being run by the government, and is still causing lightning strikes in Dakar, Senegal.  We couldn't be that far wrong, could we?

But as I pointed out before, people who (1) don't care about evidence and (2) are convinced that the government is in a huge conspiracy to wipe out the entire human race are very likely to do stupid stuff.  Witness Mancil and Dryden, who according to the Coffee County Sheriff's Department had amassed "[a] massive amount of arsenal seized [that] looked like something out of a movie, one where a small army was headed to war."

Apparently, besides HAARP's role in modifying the weather, Mancil and Dryden also thought that it was being used to "trap people's souls."  What the U. S. government would do with a bunch of souls, I have no idea.  Maybe they figured that there were some members of congress who could use a replacement, I dunno.  Be that as it may, Mancil and Dryden were apparently "told by god" that they were to go to Alaska, kidnap a scientist and steal his ID badge, and use that to gain access to the facility, after which they would blow it up and "release the trapped souls."

So here we have yet another example of why it's important for people to start paying more attention to facts, and less attention to crazy claims made by random wingnuts.  (Following this dictum would put Alex Jones out of business, which would be a step in the right direction.)  In any case, I'm glad the whole thing ended happily.  The would-be terrorists never made it out of their home county and are cooling their heels in jail, and the scientific facility is safe, at least for the time being.  So now we can turn our attention to worrying about other things, such as the outcome of next week's presidential election, which may well leave me wishing that HAARP could wipe out humanity.
Posted by Gordon Bonnet at 2:15 AM