So another election has come and gone, and most of us on both sides of the aisle are more or less recovering from the shock of the results.  I've been known to make some strong political statements in the past -- yesterday's post being a case in point -- but there's a part of me that sometimes wonders why I bother.  I have the sense that those posts are, in essence, futile.  All such ranting does is to make half of the people who see it shout "Yeah!  Exactly!  Right on!" and the other half mumble "Damn ijit." 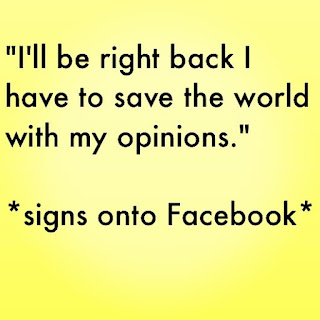 So it was with great interest that I read a study just released two days ago by the Pew Research Group showing that in fact, some minds are changed by what shows up on social media... just not very many.

According to a survey conducted this summer of over ten thousand U.S. adults, 20% of social media users said that they have had their opinion swayed by something they've seen posted.  Conservative Republicans were the least likely to change (13%) and liberal Democrats the most (25%), which is perhaps unsurprising given two things -- studies have shown that conservatives have a greater desire for certainty and intolerance of ambiguity, and that conservatives tend to have a greater distrust of media in general than do liberals.

Still, it surprised me that so many people report changing an opinion.  We tend to surround ourselves, both on social media and in real life, with people who think like us -- the so-called "echo chamber" effect -- so a lot of us don't get presented with well-thought-out opposing opinions in any case.  But respondents on the Pew survey report being swayed on some pretty important issues.  Here is just a small sampling of responses:

I don't know about you, but I find this fairly heartening.  The cynical side of me -- never very deeply buried -- has been reinforced considerably by the posturing and snarling I've seen during this election cycle, in some cases by people who previously I had considered to be thoughtful and tolerant.  It's good to know that my pessimism may, in some cases, be unwarranted.  20% may not seem like a lot, but it does attest to a level of flexibility that I had not anticipated.

Nice, sometimes, to find myself in that 20% -- induced to change my mind, in this case with regards to a rather dismal view of my fellow humans.
Posted by Gordon Bonnet at 2:06 AM