Those of you who are, like me, of the atheist persuasion will no doubt be thrilled to hear that we are already ramping up the War on Christmas.

Hey, if the stores can start putting up Christmas decorations before Halloween, in the interest of fairness it should be okay for us godless heathens to start our diabolical machinations at around the same time, right?

This year we are going to destroy Christmas and crush the hopes and dreams of little Christian children everywhere by: getting Starbucks to change the color of their coffee cups. 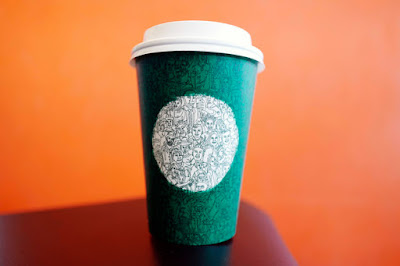 Okay, so I admit that we atheists had nothing to do with the fact that Starbucks changed their coffee cup design.  In fact the first one, which was red, honestly had nothing to do with Baby Jesus, either.  It was just red, as are many things in life, including stop signs and the sweatshirt I'm currently wearing.  The Starbucks marketing arm decided that it was time for a change, and hired artist Shogo Ota to draw a very cool design -- a hundred faces drawn using a single pen stroke.  Ota's design, said a spokesperson for Starbucks, "represents the connections we have as a community. It's meant to be a symbol of unity, and to encourage us to be good to each other."

Which elicited an "oh, hell no" from the evangelical Christians.  Apparently to them Christianity, and Christmas in particular, has nothing to do with unity and being good to each other.  Here is just a small sampling of the outraged responses Starbucks got upon revealing the new design:

Yes!  Islamic green!  Same as those goddamn trees you see everywhere!  And grass!  Even the plant kingdom is trying to brainwash you to accept Shari'a law!  Buy a house plant, and the next thing you know you'll be standing on the street corner shouting "Allahu akbar" and taking pot shots at passersby!

I mean, for fuck's sake.

What strikes me about this tempest in a coffee cup is that these are, by and large, the same people who scream bloody murder about "political correctness" whenever someone objects to derogatory language being directed toward minorities, and yet they consider a change in a coffee cup design to be the moral equivalent of carpet-bombing Whoville.  So I guess their blathering about political correctness translates to "you can't take offense to anything I say, but I'm still entitled to get my panties in a twist over absolutely nothing."

So anyhow.  My feeling is that if we non-believers are going to get accused of waging a War on Christmas, we oughta at least live up to our reputations, and that as a first salvo, changing coffee cup colors kind of sucks.  Time to ramp things up.  I'm thinking of doing my part by carrying around a boombox, and every time I hear sappy Christmas music, revving up some Nirvana or Nine Inch Nails or Linkin Park.  So goodbye, "Little Drummer Boy," "Frosty the Snowman," "Sleigh Bells," and "Rudolph the Red-nosed Reindeer."  Hello "Smells Like Teen Spirit," "Closer," and "Waiting for the End to Come."

Which would be a distinct improvement, especially as regards to "Little Drummer Boy."  I freakin' hate that song.
Posted by Gordon Bonnet at 2:14 AM